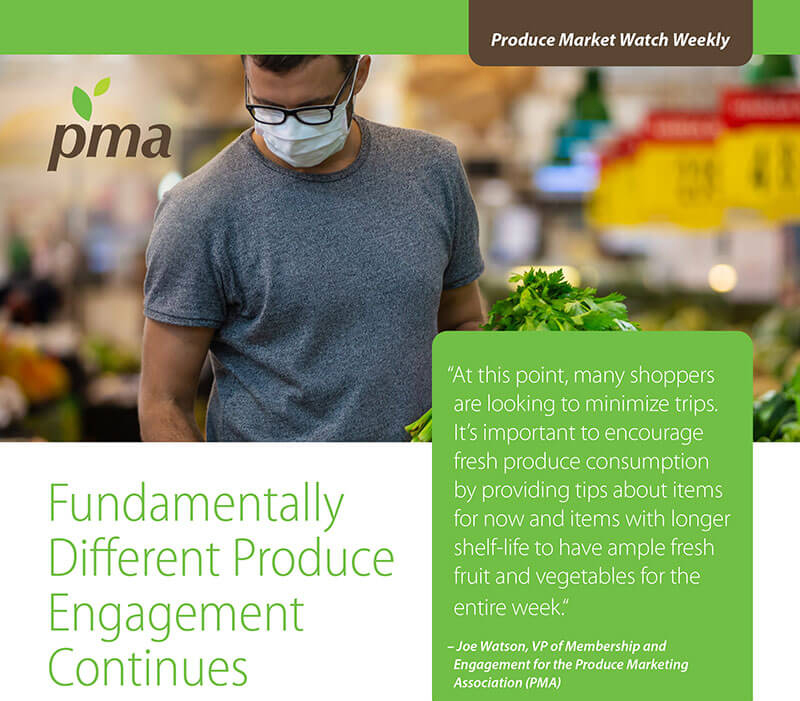 March 29 marked the end of what has been, for most people, the third week of tightening social distancing measures caused by the rapid spread of the coronavirus. As of early April, 47 states have issued some type of executive order governing social and business activities, with tremendous impact on grocery and produce sales. While the foodservice side has been decimated, sales at retail started surging come the second week of March. 210 Analytics, IRI and Produce Marketing Association (PMA) partnered up to understand the effect for produce in dollars and volume throughout the pandemic.

During the week of March 29, produce sales continued to show highly elevated levels regardless of where they were sold in the store, despite many chains running limited opening hours:

“We see fundamentally different consumer engagement with produce amid Covid-19 and week three continued to show a three-way split of the produce dollar between fresh, frozen and shelf-stable,” said Joe Watson, VP of membership and engagement for PMA. “This is why fresh produce never saw the kind of surge in sales that we’ve seen in fresh meat or other perimeter departments. At this point, many shoppers are looking to minimize trips. It’s important to encourage fresh produce consumption by providing tips about items for now and items with longer shelf-life to have ample fresh fruit and vegetables for the entire week.”

The March dollar growth trend line for fresh fruit shows very strong results for the week endings March 15 and March 22 and a return to more moderate growth levels the week of March 29, at +1.5 percent, which translated into an additional $9 million in sales. Sales growth patterns for fresh vegetables were similar, but higher. For the week ending March 29, IRI showed vegetables up 15.2 percent—adding $88 million versus the comparable week in 2019. It is important to point out that stockouts and purchase limits may have affected reported gains. Additionally, distributors are finding creative ways of going consumer-direct. Those sales are not reflected in these numbers.

Weekly dollar growth over the comparable week in March 2019

The all-important question is how much of a role price played in all this, with the heavily reduced foodservice demand providing ample produce supply. At the onset of coronavirus in the U.S., dollar and volume sales were relatively close together for total produce, at +0.4 percent for dollars and +1.3 percent in volume. However, particularly the week ending March 22, volume sales far exceeded dollar sales, creating nine point gap, which would indicate deflation setting in at retail for some areas.

The gap was widest for vegetables, particularly the latest two weeks. For the week ending March 29, volume sales gains for vegetables were more than 10 points higher than dollar growth.

For the third week in a row, potatoes were the growth leader in absolute dollars, selling $32 million more than in the comparable week in 2019, or +65.1 percent.  Others that gained big in dollars were onions, tomatoes and oranges. But at the category level, big differences between dollars and volume were observed for some fruits and vegetables as well. “We’re seeing significant disparity in dollars and volume sales growth for many fruits and vegetables,” said Jonna Parker, Team Lead, Fresh for IRI. “Looking at the 10 fruits and vegetables that added the most new dollars in the week of March 29, for instance, shows significantly higher volume than dollar growth for items such as onions, carrots and lemons. This is likely the direct influence of the decline in foodservice demand.” Parker also points out that produce categories with longer shelf-life, cook well or are easy to snack on having grown demand over the past few weeks.

“The produce industry is a resilient business,” said Watson, but farmers and producers of fresh fruits and vegetables need our support now more than ever as many restaurants are doing a fraction of their normal volume and this is having downward pressure on prices. We are actively working to connect supply with shift in demand from food service to food retailing and fresh to frozen and canned. Additionally, it is important to reassure Americans that fresh produce is safe and emphasize the very important role of produce in the diet.”

Fresh fruit sales growth dropped back down to single digits, at +1.5 percent. Oranges saw the biggest gain in absolute dollars, up $9.8 million over the week of March 29 over the comparable week in 2019, or +42.7 percent. Other big contributors in dollars and percentage were avocados (+$7.5 million or 17.8 percent) and lemons (+$4.4 million or 32.7 percent). Berries, apples and bananas remain the largest categories.

Fresh Versus Frozen and Shelf-Stable

Consumers continued to split their produce dollar three ways during the week of March 29. Frozen and canned vegetables had ongoing strong growth during the last week of March. 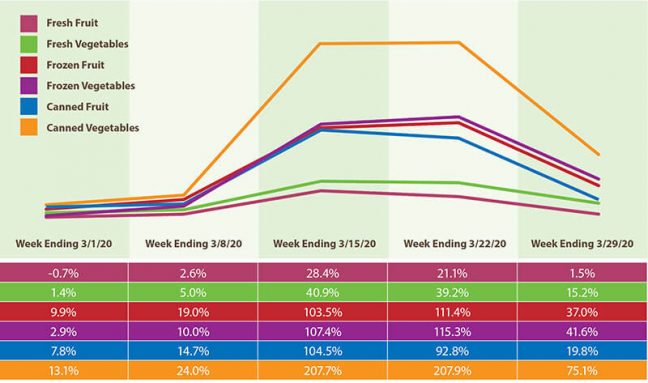 “With the stocking up on canned and frozen produce slowing down this week, the share of dollars going to fresh dollars was significantly higher than we’ve seen in recent weeks,” said Parker. “However, at 76%, the fresh produce share is still significantly lower than its typical share, with continued above-average strength for frozen fruits and vegetables.” 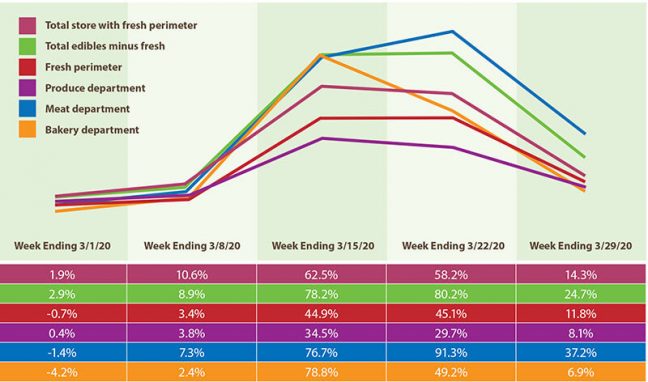 Whereas fresh produce has been seeing sales increases over the comparable weeks in 2019, floral is struggling amid COVID-19. For the week ending March 29, sales were down 37.4% versus 2019. Many retailers have cut back their orders since the onset of coronavirus as they focused on stocking critical staples.

Please recognize the continued dedication of the entire grocery and produce supply chains, from farm to retailer, on keeping the produce supply flowing during these unprecedented times. #produce #SupermarketSuperHeroes

210 Analytics and IRI will continue to provide weekly updates as sales trends develop, made possible by PMA.