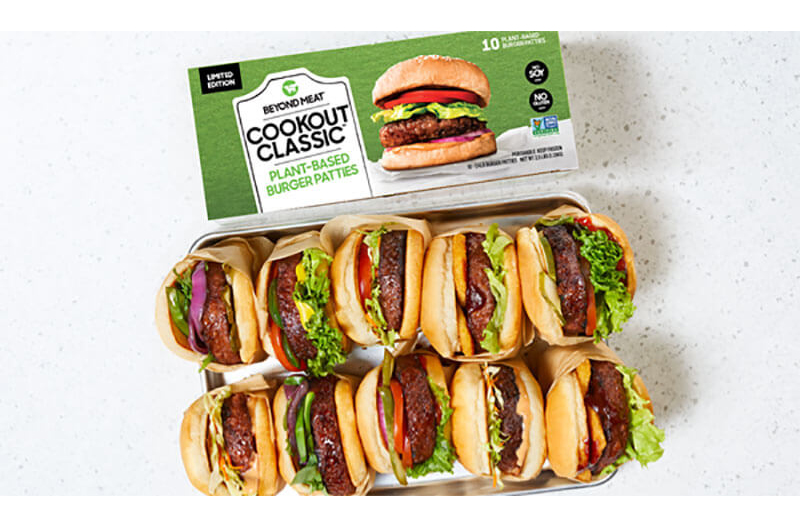 El Segundo, California-based Beyond Meat Inc. has introduced its Cookout Classic, a limited-edition burger 10-pack available at a majority of Walmart and Target stores nationwide and select retailers across the U.S. beginning the week of June 22. Sold in the frozen meat aisle with an SRP of $15.99 ($1.60 per patty), the new offering will be available through mid-August, or until supplies last, and is intended to narrow the price gap between plant-based meat and animal protein.

With growing consumer interest in plant-based protein, the Cookout Classic value pack is designed to inspire a shift to plant-based meat at barbecues and summer gatherings. The burgers are made with simple, plant-based ingredients without GMOs, soy or gluten, and are packaged in a fully recyclable cardboard carton, aligning with Beyond Meat’s commitment to sustainability.

According to the most recent SPINS data, in the four-week period ending May 17, Beyond Meat was the No. 1 brand in refrigerated plant-based meat and owned the top four selling items in all of plant-based meat.

“With summer grilling season underway, we are pleased to launch Cookout Classic value packs nationwide at our most affordable price point to date, enabling more consumers to ‘Eat What You Love’ while enjoying the nutritional and environmental benefits of plant-based meat,” said Ethan Brown, founder and CEO of Beyond Meat. “This forward-looking pricing represents an important milestone along our journey to make Beyond Meat more accessible to all consumers.”

The introduction of Cookout Classic value packs is one of several initiatives aimed at increasing accessibility of Beyond Meat’s plant-based meat, including a new direct-to-consumer site expected to launch later this summer. Through July 4, fans can enjoy additional savings on Beyond Meat’s products found in the fresh meat case with promotions at major retailers including Kroger, Publix, Albertsons, Whole Foods Market, Shoprite, Giant Foods and Stop & Shop.

To further engage consumers on the benefits of plant-based meat, Beyond Meat launched the Why Go Beyond content series, a compilation of personal stories from celebrity ambassadors and friends that uncovers why they have made the choice to shift their diets toward plant-based. Through these videos, Beyond Meat is inspiring people to see that the positive choices they make, no matter how small, can have a great impact on personal health and the health of our planet.