Perhaps no state better reflects the increasing diversity of the nation than California, with some 38 million residents comprising both large Hispanic and Asian populations. The grocery industry has been keen to provide authentic, fresh food and products that each community and ethnic group is seeking. 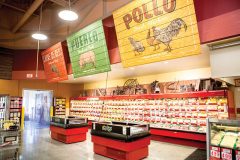 “Independent retailers have done an excellent job of making their stores unique and designed specifically for the cultures they serve,” said Ron Fong, president and CEO of the California Grocers Association. “They have a real hometown feel to them.

“In California, the Hispanic population is growing. Both Northgate [Gonzalez Market] and Superior [Grocers] are growing and have opened new stores.”

Superior Grocers plans to open a new location next month in Bakersfield. Fong added that Emart, South Korea’s largest retailer, and the owner of Good Food Holdings – a California-based company of Bristol Farms, Lazy Acres Market and Metropolitan Market – has announced plans to open a store in Los Angeles. No opening date has been set.

Jim Amen, president and CEO of Commerce, California-based Super A Foods, has noticed other emerging trends.

“What’s new is the Hispanic population in California, which has always been huge, is now an older – second, third and fourth generations,” he said. “Their eating habits are different than their parents and grandparents. They are buying much healthier than they’ve ever bought before, more fruits and vegetables. They are not cooking with lard anymore. They are not buying the hominy and menudo that they used to. It’s a challenge to stay on top of the changing buying habits.”

Amen went on to note that Super A will mark its 50th anniversary next year.

“The Hispanic market has changed significantly from what it used to be 50 years ago,” he said. “For example, 22 years ago when we opened our Highland Park store, the area was 100 percent Hispanic. Now, it’s probably 40 percent.

“The market has changed and we have to change with it. We have to get more healthy options, more things that are sugar-free and gluten-free, healthier stuff and it has been a challenge for us. Hispanics and Millennials buy different than their parents bought.”

Founded in 1980 and headquartered in Anaheim, California, Northgate Gonzalez is a family-owned and operated Hispanic supermarket chain with 41 stores in Orange, Los Angeles, Riverside and San Diego counties. Mike Hendry, EVP, said the company is “super focused” on its core pillars.

“First and foremost is safe shopping. We want everybody to feel safe when they come in the store for our associates and customers. We are proud to be one of the first to take many, many steps as it relates to customer and associate safety.

“Our other pillar is customer advocacy. We put together some content, programs and online content that make being at home [during the COVID-19 pandemic] more tolerable. We created study aides, crafts, things to do with kids, new and different recipes so people can engage and cook at home.

“We also have price advocacy. We have committed to holding down prices on a lot of staple items and are holding those prices for 30 days.”

While several industries have been devastated by COVID-19 due to shutdowns, the grocery industry experienced a huge spike in sales.

“Before the pandemic, the approximate split of the market share between restaurants and home cooking was about 50/50. When the pandemic hit, it moved close to 100 percent home cooking,” Fong said.

Along with growing grocery numbers came “more meaningful shopping,” Hendry said. “They are not going to multiple stores as much. They are trusting more in one store in fulfilling their needs in that one location.”

With this spike in shopping and store loyalty came some local responsibility. Several, if not all, retailers interviewed for this article have taken it upon themselves to connect with their communities, some of which have been hit particularly hard, during the pandemic.

They work with organizations to drive dollars to neighborhoods that need it most. Many donate what they can and work with vendor partners to provide more.

“We gave away free groceries at one of our locations in the first hour of business. It was a nice event for one of our communities,” said Richard Wardwell, president of Santa Fe Springs, California-based Superior Grocers, one of the largest independently owned chains of grocery stores in Southern California.

“This last weekend, we gave away a free 8-inch cake to graduates if they presented their cap and gown or their announcement. We had a lot of social support on that, and a lot of people came in and took advantage of it. We are just trying new ways to help the communities and let them know we care.”

Hendry foresees a lengthy recovery process for many communities.

“The economic impact is going to linger for a very long time,” he said. “People’s behaviors aren’t going to change very quickly. We are taking the long-term view that a lot of things that are going on right now are going to stick around.

“We operate in communities that are super high impact right now. The jobless rate in these communities is probably higher than other areas. When you think of the hotel, restaurant and other industries like that, those people are out of work, and they live in our neighborhoods. They are highly impacted. There are a lot of people that are at need or at risk in our communities.”

Back at Superior, Wardwell talked of seeing many businesses shuttered.

“There is a lot of stress within the local community with budgets being impacted,” he said. “As people lose their jobs, there is less money to buy their food. It is a trickling effect. Many won’t be able to recover.

“At Superior, we are doing everything we can to remain open, viable and remain a key part of this community. If we are able to hire additional people with the additional business, we are trying to do so.”

“People are gravitating towards value and stretching their dollar. Our biggest opportunity is retention. Hold onto the shoppers that discovered Northgate and make them lifetime customers, capitalizing on the new trends, assortments and behaviors that customers are looking for.”

Fong was recently appointed by Gov. Gavin Newsom to serve on a bi-partisan task force responsible with helping plan the state’s economic recovery.

“[Newsom] just stated that we, in the grocery industry, are the gold standard in safety, sanitization and how to open stores properly moving forward,” Fong said.