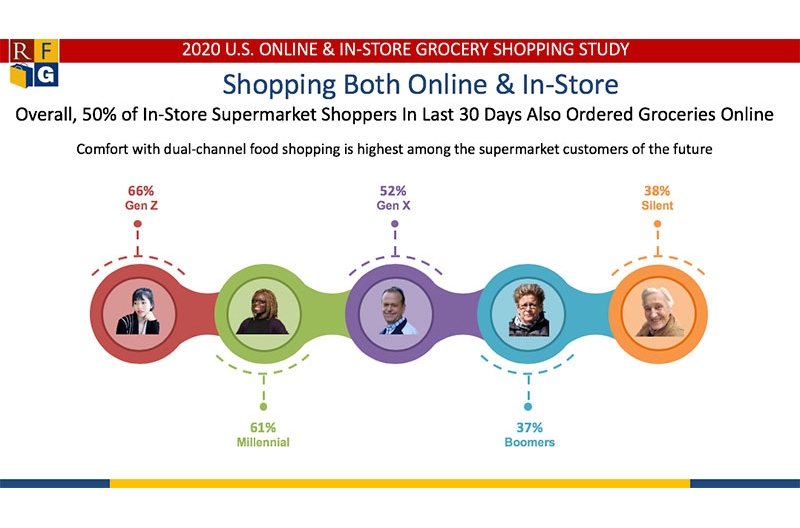 The Retail Feedback Group (RFG), based in Lake Success, New York, has released its 2020 U.S. Online & In-Store Grocery Shopping Study. This report provides insight from both online and in-store supermarket shoppers, collected during the COVID-19 pandemic.

Overall, 50 percent of in-store supermarket shoppers in the last 30 days also ordered groceries online. Not surprisingly, this is even more common with Gen Z (66 percent) and Millennials (61 percent) and to a lesser degree Gen X (52 percent), followed more distantly by Boomers (37 percent) and the Silent Generation (38 percent). It should also be noted that Gen Z shoppers registered the lowest overall satisfaction, on a five-point scale where five is highest, relative to the other generations, for both their online (4.22) and in-store (4.02) experiences.

“Grocers and analysts have traditionally segmented ‘in-store shoppers’ from ‘online shoppers.’ However, a key takeaway from our research is the extent to which individual shoppers are now buying groceries both in a store and online, and that this activity is strongest among the younger and growing generations,” said Doug Madenberg, RFG principal. “We now have food shoppers who are able, and increasingly willing, to utilize a blend of physical stores and digital storefronts to meet their families’ needs, and it will be paramount to satisfy these shoppers going forward.”

Majority of online shoppers used more than one service provider

While 38 percent of shoppers used one online grocery provider, 62 percent used two or more providers in the last three months, during the pandemic. This suggests many shoppers tried multiple services to see who could best meet their needs in terms of factors like product availability and pickup or delivery slots, according to the RFG report.

The supermarket channel jumped to 34 percent of online shoppers indicating a supermarket as where they most recently shopped online for groceries during the pandemic (up from 22 percent in 2019). Walmart still registered the highest overall percentage of shoppers at 40 percent (showing a small increase from 37 percent in 2019) and Amazon decreased significantly from 29 percent to 14 percent. Instacart-fulfilled orders grew to 36 percent, up from 27 percent last year. However, despite the pandemic surge, supermarket shoppers constitute the largest percentage indicating they plan to shop less for grocery items online in the coming year (20 percent), as compared to Walmart (16 percent) and Amazon (13 percent) shoppers.

“Considering the sudden, sizeable pressure on online grocery shopping during the pandemic, it is noteworthy overall satisfaction registered as high as it did. Although supermarkets surged in online shopping use, and many customers may stick, the results show some supermarket shoppers don’t expect to continue online shopping,” said Brian Numainville, RFG principal. “With that in mind, it will be important that supermarkets and online service providers maximize their investment by continually strengthening their offerings in order to retain existing customers, while attracting new ones, along with preparing for any future situations.”

In-store supermarket shoppers rated cleanliness of the store, on a five-point scale, at 4.41, and quality/freshness of the food and groceries at 4.37, as the strongest core experience factors. Associate friendliness, while the highest service rating, received a score of 4.30, followed by checkout speed/efficiency (4.25), associate helpfulness/knowledge (4.16) and the lowest scoring service area – associate availability – at 4.12. Item variety and selection plummeted to 4.00 (down from 4.38 in the previous study) and value for money, again at the bottom of the list, fell further still to 3.93 (from 4.17 previously). Overall satisfaction registered 4.08, a drop from 4.31 in the 2019 study.

Stock levels presented a major challenge for grocery shoppers in-store and online. About half of in-store supermarket shoppers (51 percent) indicated the store shopped wasn’t in stock on everything they wanted to purchase. Results were similar for online food shoppers with 49 percent registering the inability to purchase everything they wanted due to out of stocks, and only 17 percent were able to purchase an acceptable substitution for all out of stock items, and fully 45 percent did not end up receiving all items ordered. Considering positive in-stock conditions lead to higher satisfaction, these out-of-stock conditions resulted in not only lost sales but lower overall satisfaction.

While 55 percent of shoppers, either in-store or online, report shopping less frequently during the pandemic, 51 percent indicate they spent more per trip. As a result, shoppers also indicated they now stockpile products for longer periods of time.

RFG offers a broad spectrum of research, consumer insight and consulting services. Its flagship program, Constant Customer Feedback (CCF), is the first automated feedback platform specifically designed and introduced for supermarket retailers and is currently implemented in hundreds of locations across the United States. 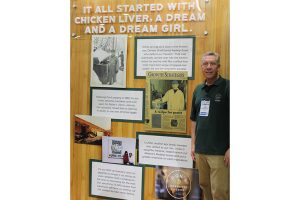