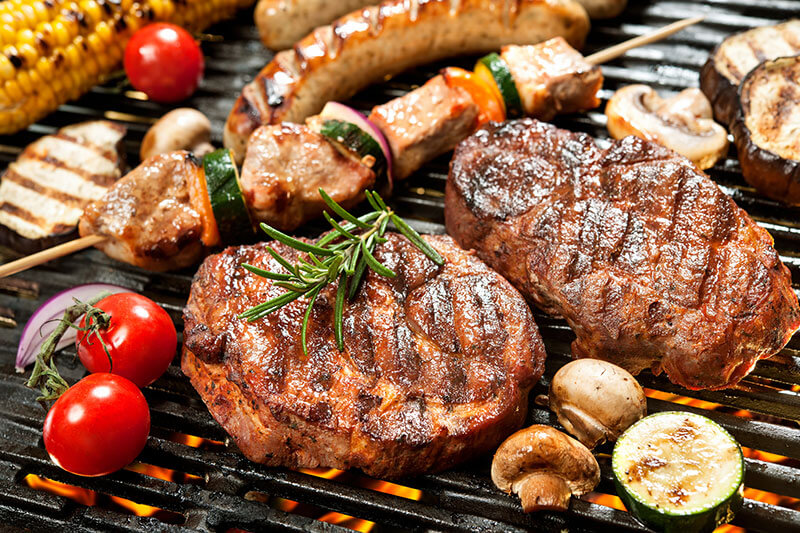 The week ending June 28  fell in between Father’s Day and July 4. The meat department had much improved its in-stock position and assortment continued to recover from May lows. However, prices remained highly elevated and that was the big unknown relative to everyday demand versus year ago. The second unknown was consumer engagement with foodservice, with restaurants in most parts of the country reopened, albeit with social distancing measures in place, according to a report by Anne-Marie Roerink, president of 210 Analytics. Report details follow.

Ultimately, the demand landscape resulted in a 15.8 percent increase for dollars — the 16th week of double-digit gains since the onset of the COVID-19 pandemic. However, it was price that drove the gain with volume nearly in line with the prior year, at -0.6 percent. This was the first time since the start of the pandemic purchasing in early March that meat pound sales were lower than the same week year ago. The dollar/volume gap did improve somewhat versus the prior week, at 16.4 percentage points 18.4 points during Father’s Day week.

During the last week of June, the gap between volume and dollar sales stood at 16.4 percentage points. The main drivers of the gap continued to beef and pork. Volume sales for beef turned negative as it did last week, and chicken had its first week of negative volume sales as well.

The longer, four-week look ending June 28 also shows double-digit volume/dollar gaps for fresh beef and pork, that in turn caused a double-digit volume/dollar gap for total meat. However, the gaps are much larger than those seen for the week of June 28, showing that prices are starting to come down. Turkey and exotic meat, which includes proteins like bison, have the smallest gaps over the four-week look. This is a clear sign that at least some consumers are shopping other proteins amid the high beef and pork prices.

Consumer comments on the Retail Feedback Group Constant Customer Feedback system contained fewer comments on meat out-of-stocks, but the depth of assortment has not been resolved everywhere. “I was pleased to see the meat counter fully stocked. The meat department is doing a great job.” But another shopper commented, “The meat department still had a lot of empty space. There was not much of a selection and no family packages of chicken.”

IRI’s measure reflecting the average number of items sold per store indeed showed a small improvement to 312 — its highest level since the week ending April 19. While a vast improvement, this still reflects 31 fewer items than the same week last year.

Christine McCracken, executive director food and agribusiness for Rabobank, said she is expecting the supply landscape to continue to improve in the upcoming weeks.

“Beef and pork suppliers ramped up production in front of the July 4th holiday, with pounds produced 5 percent and 14 percent higher, respectively, in the week prior to the holiday week. Harvest levels normalized and were in line with year ago this week. Pork production moved 14 percent higher in the week prior to the holiday-shortened week, driven by a 10.7 percent increase in the harvest. Chicken production has dropped and is now nearly 5 percent below year-ago levels reflecting production cuts taken earlier this spring and a gradual drop in bird weights.”

While assortment and availability improved, consumers continued to call out higher meat prices and fewer meat features on CCF. “Not many sales on meat. Good sales on chicken but not on beef. I understand the current situation, but the beef prices are sooooo expensive and people cannot eat chicken everyday!” Another shopper pointed to switching stores because of the meat prices, “The prices are too high, and I’ll go to shop elsewhere when I need meat now.”

IRI’s insights on the average retail price per volume show double-digit increases on the price per pound for beef and pork for the one- and four-week period ending June 28. However, the price gap versus year ago has shrunk several points when comparing the four-week to the one-week look for both beef and pork. On the other hand, prices for chicken are rising. In the four-week look prices were up 7.5 percent versus year ago and during the most recent week prices were up 9.4 percent. Exotic meats are the only ones to be down in the shorter-term and four-week look.

McCracken provided insight on likely price movements in the next few weeks.

“Despite increased production, retail prices on most pork and beef items are still reflecting earlier product shortages and few holiday promotions. Wholesale beef prices are now in-line with year-ago levels, with slightly weaker choice values on larger supplies of higher grading carcasses. Few retailers featured beef items for the holiday given recent high prices, but interest in ground product remains steady. Boneless strip loins were under the most pressure, as retailers look to pork and chicken items for holiday promotions,” she said. “Prices for most pork items weakened on larger supplies and heavy retail inventories. We expect most pork items to remain under pressure after the holiday, with notable pressure in loins after several weeks of stronger demand. Chicken prices continue to respond to the gradual improvement in foodservice and the recent drop in production, with composite values up nearly 4 percent in front of the July 4 holiday. Wings and tenders continue to outperform, while breast meat has struggled to find retail support.”

The overall 15.8 percent meat department gain was fueled by double-digit gains for all proteins, except chicken. The week of June 28 was the first time since the onset of the pandemic that chicken sales gains fell in the single digits, at +6.9 percent. Lamb and beef had the highest percentage growth, at +30.5 percent and +22.2 percent. Beef easily had the highest absolute dollar gains (+$105 million), followed by pork (+$18 million) and chicken (+$16 million). Exotic meat sales gained just under $1 million or 46.8% versus the same week year ago.

Ground meat continued to do well versus year ago, but the gains were much lower than during Father’s Day, the week prior. The growth percentages were similar for all areas, at around +20 percent. Beef contributed most in absolute dollar gains, at +$38.8 million. However, all of the gain was driven by higher prices, with ground beef volume sales down 2.4 percent versus year ago. Some consumers continued to substitute with other species, including ground turkey, chicken, pork and exotic meats, such as bison. These all saw high double-digit gains in both dollars and volume.

Ground beef increased 20.6 percent in dollars but was down 2.4 percent in volume.

For the week ending June 28 versus year ago, these four ground proteins generated $258 million in sales, which represents an additional $43 million versus year ago.

The pandemic sales performance by area

Total meat department sales came in at $1.35 billion for the week of June 28. Father’s Day week (week ending June 21) excepted, growth percentages for most of the proteins fell back to the June pattern of slight week-over-week erosion. Beef, exotic meat and bacon were the only exception and did see improvements versus the week of June 14. The last week of June also saw the first negative on the board in several months. Frankfurter sales dropped 2.1 percent versus the same week year ago.

The strong beef dollar gains prompted its share of total dollars for the week ending June 28 to jump to 57.1 percent versus 53.3 percent the first week of March. Pork also gained significantly in dollar share, from 12.9 percent during the week of March 1 to 14.2 percent the week of June 28. However, beef gained share on mostly on price, with only a slight increase in its volume share to 37.8 percent. Pork saw a much bigger jump in volume share to 18.8 percent. Chicken’s dollar share has been down but with negative growth the week of June 28, its volume share also declined.

Source: IRI, Total US, MULO, % of total meat department dollars | “All other” not reflected

Engagement with foodservice continues to be in flux, particularly as the past few weeks have seen spikes in COVID-19 cases and hospitalizations in some regions that had previously relaxed restrictions. Florida, Texas and California all rolled back some of the reopening decisions, which is likely to impact business activities, restaurant engagement and shopper behaviors in those regions.

Between the continued impact of COVID-19 and significant economic pressure, the retail demand for meat will continue to track well above 2019 levels for the foreseeable future. One of the biggest opportunities for the meat supply chain lies with helping consumers with meal planning. IRI’s weekly survey found that consumers, who were initially taking to preparing more scratch meals, are running out of meal ideas and craving variety. Pre-pandemic, it was exactly this meal fatigue that drove consumers to eat out.