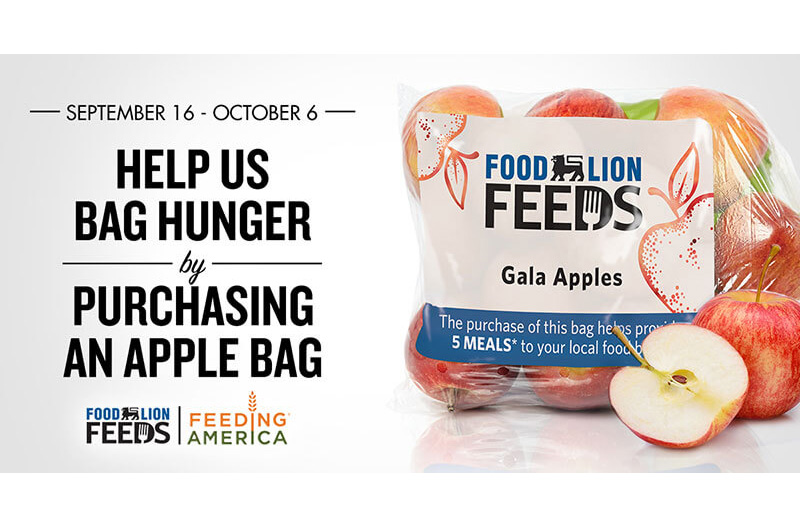 In 2019, the bagged apple campaign helped to provide one million meals to families and their neighbors in need across Food Lion’s 10-state footprint.

The bags will maintain an MVP sale price of $2.99 throughout the campaign. The number of meals provided to each food bank will be based on the number of participating bagged apples sold in each member food bank’s service area. ($1 helps provide at least 10 meals secured by Feeding America on behalf of local member food banks. Through the bagged apple campaign, $0.50 (monetary equivalent of 5 meals) from each bag purchase will be donated to Feeding America and member food banks. Food Lion guarantees a minimum donation of $100,000 (monetary equivalent of 1 million meals) from Sept. 16-Oct. 6, 2020.

“At Food Lion, we know that far too many of our neighbors in the towns and cities we serve are food insecure,” said Jennifer Blanchard, director of community relations. “This gala apple bag campaign is a reminder that fresh and nutritious food is a critical component for food banks to fight hunger in the towns and cities we both serve. This campaign is one of the many ways that our customers can help nourish our neighbors in need and set them up for success.”

Food Lion is working to create a better tomorrow by uniting with customers and partners to help eliminate the difficult choices many families are forced to make when they are struggling with hunger. Through Food Lion Feeds, the company has made a commitment to provide 1 billion more meals to individuals and families in need by the end of 2025. The company achieved its previous goal of donating 500 million meals in early 2019.

Food Lion has more than 1,000 stores in 10 Southeastern and Mid-Atlantic states and employs more than 77,000 associates. Food Lion is a company of Ahold Delhaize USA, the U.S. division of Zaandam-based Ahold Delhaize.