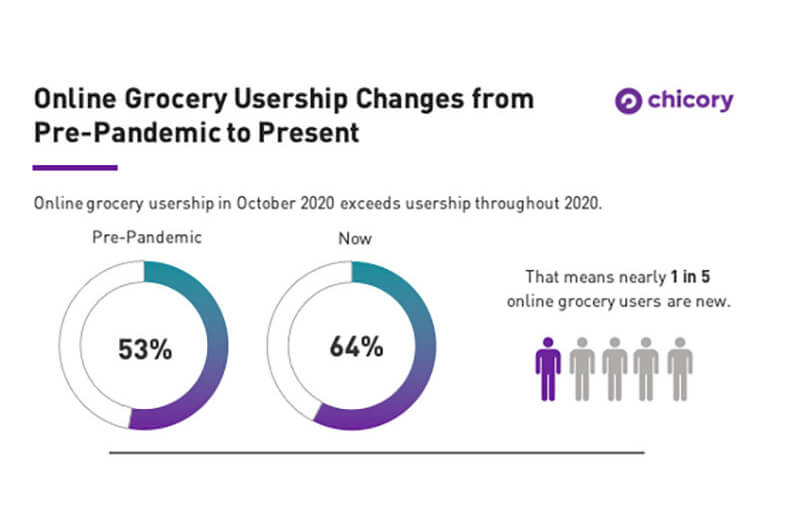 Chicory, a digital shopper marketing platform for CPG and grocery companies, has released the results of a new national grocery consumer research study, “Online Grocery Usership Changes from Pre-Pandemic to Present.” The results of this fourth quarterly consumer survey quantify the impact of COVID-19 on online grocery usage by comparing current results to past quarterly studies throughout 2020.

Walmart (55 percent) and Amazon (40 percent) are frontrunners in the online grocery wars, but data shows that there may be room for all, as there are 18 percent more new online grocery users now, compared to January 2020. 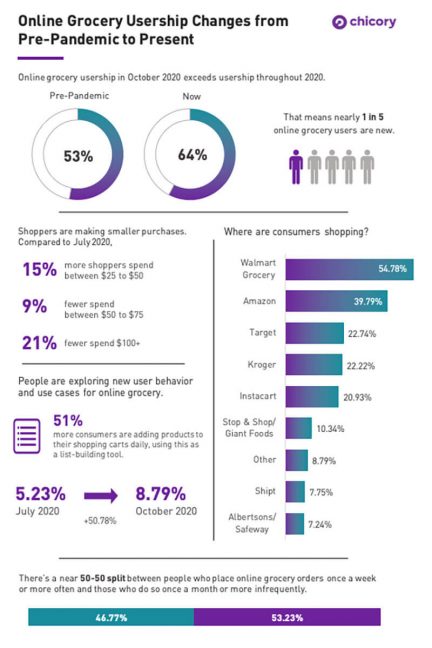 While Walmart and Amazon lost 12 percent and 30 percent, respectively, of online grocery market share from January 2020 to April 2020, Amazon regained 18 percent more share at an even higher level than all other quarters. Although Walmart lost a little over 1 percent of share compared to January 2020, the retailer still commands the majority of the online grocery market, with 55 percent consumers reporting that they use this retailer for their online grocery shopping.

While Amazon gained share, this was at Walmart’s expense and not at the expense of other retailers, as more consumers reported using smaller retailers at higher levels. This indicates that there are more online grocery users in the market this quarter than ever before.

From pre-COVID-19 to present, here is how much market share shifted for each retailer:

From July 2020 to present, here is how much market share shifted for each retailer:

“Interestingly, Shipt, Stop & Shop and Giant Foods had the largest increases in market share compared to other retailers from pre-COVID-19 to present,” said Yuni Sameshima, Chicory’s CEO and co-founder. “This may be because while all other retailers were well underway with e-commerce development, Stop & Shop, Giant Foods and Shipt were still ramping up e-commerce awareness and development. And when consumers were confronted with limited retailer availability for purchasing groceries online, they turned to alternative choices that they hadn’t considered before.”

Although many restaurants have reopened, survey results indicate that 64 percent of consumers are ordering groceries online and still cooking from home. In fact, online grocery usership in October 2020 exceeds levels from all other quarters, indicating that, at least for as long as this “new normal” is here to stay, consumers also will keep using online grocery services to do their grocery shopping.

Usership grew by 18.43 percent compared to pre-pandemic levels. October usership exceeds the previous quarter by 6.39 percent and even exceeds usage in April 2020 by 1.41 percent, meaning that the fall represents the highest usership period this year and marks a new period of growth.

In each quarterly survey, the majority of respondents add groceries to their online carts weekly or more often. In October 2020, this amounts to 56.85 percent, with the remaining adding to their carts every few weeks.

This is an 8.63 percent decline from frequency in July 2020 (61.98 percent), a 14.34 percent decline from April 2020 (65.63 percent), but a 5.96 percent increase from January 2020 (53.56 percent). This indicates that overall, more consumers are treating online grocery services as their regular weekly brick and mortar shops, building their carts with a full weeks’ worth of groceries at a time.

Survey results found a near even split between consumers who place an online grocery order once a week or more often (46.77 percent), and those that do so once a month or more infrequently (53.23 percent).

Shoppers in October 2020 indicated that they are making smaller purchases overall, likely due to the leveling off of “panic buying” behavior we observed earlier in the year.

When taken into consideration alongside the less frequent orders being placed, but the overall growth in online grocery usership in general, we can surmise that the added features and benefits that online grocers are implementing are paying off – shoppers are seeing less friction in placing small orders via online grocery, and they are less concerned about hoarding food or items that were unavailable or out of stock earlier this year.

Chicory is an NYC-based tech firm and a digital shopper marketing platform for CPG and grocery brands. Its signature “Get Ingredients” button can be found on over 1,500 recipe websites, including Taste of Home, Delish, Betty Crocker and thousands of influencer food blogs