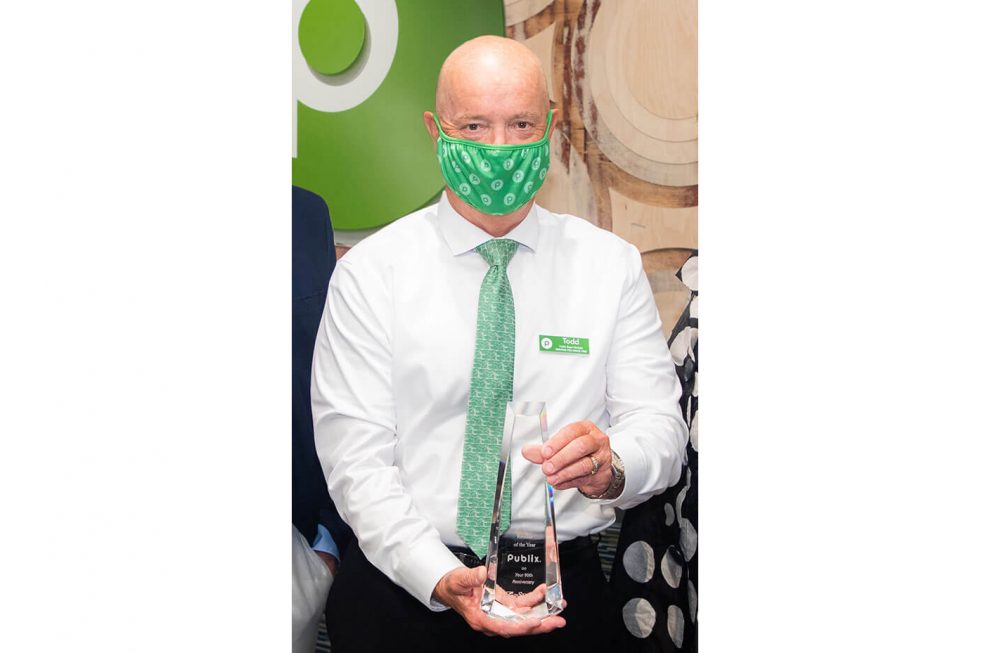 This year marks Publix’s 90th anniversary. In addition, the company has been named The Shelby Report’s 2020 Southeast Retailer of the Year.

During a recent visit to the Lakeland, Florida-company’s home state, Shelby Publishing President and Publisher Stephanie Reid and Editor in Chief Kevin Atwill visited with Todd Jones, Publix CEO, and other company officials.

Todd Jones is the first non-family member to serve as CEO of Publix. He succeeded Ed Crenshaw, the grandson of founder George Jenkins who is chairman of the company, in 2016.

Jones began the conversation with the Shelby Publishing team by reflecting on his relationship with his predecessor.

“Having the opportunity to work with Ed is probably is the best experience anybody could ever have,” Jones said. “You’re working with somebody that’s so rich in the culture and the fabric of the organization that it was just an amazing time. I still work with him today, obviously, as chairman, but it really helped out.

“It really helps to bring to life his grandfather’s vision of his company. Some of the harder conversations, he would always say, “Sit down, Todd, we need to talk. I knew what that was going to mean.”

Though he’s been at the helm for several years, Jones is quick to say it’s an ongoing process.

“The transition has been good,” he said. “It’s been a lot of work, but [it helps] having a lot of great people, a lot of Publix people who have spent a lot of time with the company. [Some] have also worked either with Mr. George, around Mr. George, with Ed, with Howard Jenkins, with Charlie Jenkins Jr. – some of those great leaders that have helped position Publix, up to five years ago.

“When I first took on the role, I was kind of dual-roling it as CEO and president. We’ve recently promoted a president, Kevin Murphy, into that role. It’s been a little bit of a transition.”

As part of that transition, Jones said his perspective has undergone a slight change.

“So that’s been a nice transition, because it really helps solidify how you think about the business a little bit.” 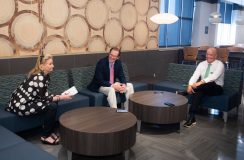 Turning to an overview of the company, Jones marveled at the fabric and longevity of Publix’s team.

“We have a running list of the longest years of service with the organization. And that list is 2,000 people long. And if you don’t have probably 36 years, you don’t make the list. We’re very proud of that.”

And Jones himself would make that list, as he has more than 40 years with Publix, starting at age 15 as a bagger at a store in New Smyrna Beach, Florida.

“I’m very proud of what Mr. George started, with the vision of a company of ownership, with the vision of a company of promotion from within an opportunity and inclusive organization back in 1930,” he said. “And we’ve done our best to continue to carry that vision forward and take good care of our most important asset – our associates, who in turn will take care of the customer.”

Jones then reflected on some wisdom imparted by the company’s late founder.

“I’ll tell the story about Mr. George, when he was once asked how much he would be worth today had he not given so much away. His response immediately was ‘probably nothing.’ George Jenkins knew the importance of how a strong community would build a strong company.

“Mr. George always believed in giving back your time, your talent and your treasure. And we continue to carry that forward, making sure that our communities that we operate in are in as good of condition as we can make them by giving back into those organizations.”

Turning to the future, Jones outlined his vision for the next five years.

“Fun, very fun,” he said. “We get to get up every day. We get to work with each other as a functional team, which is built on trust, having a relationship with your partners within the company that you can really have good dialogue and have healthy conflict. It’s not about personal conflict. It’s about solving the issues that the company is trying to solve.

“In the next five years, we’ll continue to build on that momentum of, ‘One Publix, One Purpose,’ and carrying that mantra moving forward.”

The second item on the horizon will be sustained growth, according to Jones.

“Our company is a growth company, and we want to continue to grow,” he said. “We have about 23 net new stores that we’ll have this year – 30 total, with seven that will be replaced. We’ll probably have about 25 net new stores next year if everything works as planned.”

While there may not be any new market areas in Publix’s three-year real estate plan, Jones said the company would add “a lot of new stores.”

“We’re going to continue to grow the stores,” he said. “We also remodel a lot of stores every year. So it’s not just a matter of opening new stores, it’s taking this concept, and then remodel the store – figuring out how we take this concept and put it into a store that’s 30 years old. And that’s an interesting dynamic to try to figure out how you do that.”

And growth is not limited to facilities and stores.

“We’ll have a lot of time spent on developing people,” Jones said. “We get to have that great opportunity to develop people and watch them grow and carry the company forward. And so that’ll be the next five years’ efforts, to continue to develop on the genesis of this organization.”

Philanthropy also will remain at the forefront for Publix.

“We’re going to keep giving back to the community, more than we ever have, as far as trying to help solve food insecurity,” he said. “We do a lot of other things. But that really is – for us, for me – a big point. We’re in the food business, and I don’t think there’s anything we should be doing more than to help figure out how we can help solve that – doing our part on that.”

Jones acknowledged that technology can be wonderful, but said Publix will take a measured approach.

“We’re going to constantly change as fast as we can and as fast as we need to, but not unnecessarily,” Jones said. “There are some things with technology that we’ve got to be really careful about. It looks nice and looks fun – it looks interesting on the outside – but when you dig into it, the practical application of that might not be there.

“We’ll do everything we can to leverage technology where it makes sense for the company.”

Prior to the COVID-19 pandemic, Publix had an existing partnership with Instacart, a delivery and pickup service, which has only strengthened over the past nine months.

“I think, for us, one of the things that I like to think about for Publix is that there’s complementors in this business that you need to leverage. And Instacart happened to be one of those,” Jones said. “It had a really strong skill set, it matched well with our skill set, and we were able to get together and figure out how that may work as a unit of one.

“But we have other complementors that we have in the store as well, like Boar’s Head. They’re an extremely important business partner for Publix, and they help us and we help them. It makes it a better experience for our customers.”