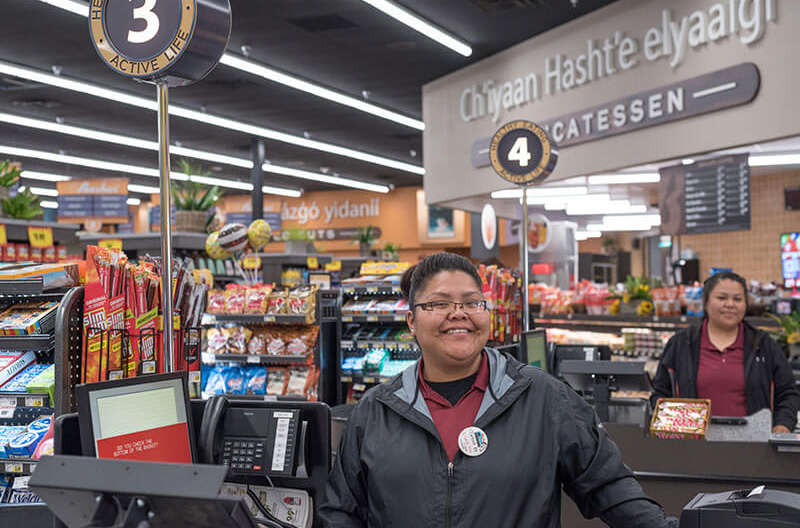 One of the more compelling stories to come from the COVID-19 pandemic in Arizona is the efforts of independent grocery chain Bashas’, which operates eight stores within the Navajo Nation.

Mark Miller, president of the Arizona Food Marketing Alliance, was quick to praise the company’s commitment.

“They really went out of their way to help that community get through this,” Miller said. “The effort that they put toward the extra food bank deliveries was incredible. They have really stepped up as demand has doubled and tripled at food banks.”

Bashas’ Family of Stores is a family-owned chain that currently operates 113 supermarkets in the state and one in New Mexico. Founded in 1932, the company has long been known for its support of local communities.

And that’s true of all of the chain’s formats. The flagship Bashas’ Supermarkets is a traditional grocery store. The company also includes Food City, a group of stores that are “price-conscious” and Hispanic-focused. AJ’s Fine Foods is its gourmet line. There is one small store in northern Arizona called Eddie’s Country Store, and then there are eight Bashas’ Diné Markets, which serve the Navajo Nation.

Diné is a Navajo word meaning “the people.”  Bashas’ has been serving the Navajo Nation for nearly four decades, with its first location in Chinle opening in 1982. Six more locations followed in the ensuing 20 years and the eighth opened in 2019 in Sanders. 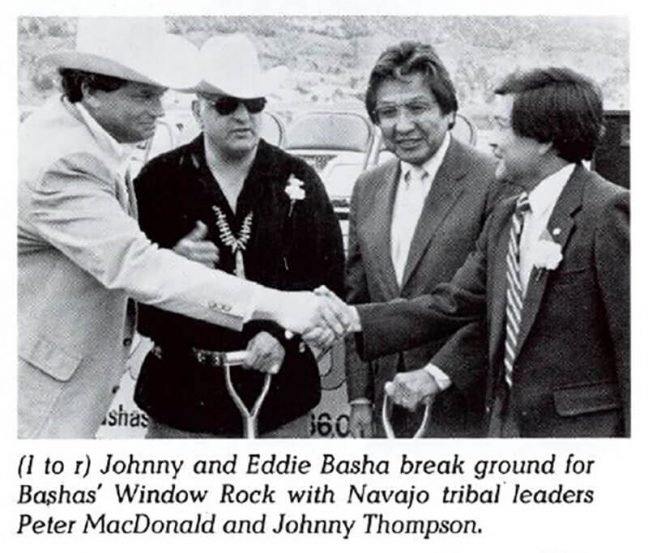 “The relationship between the Bashas’ organization and the Navajo Nation is spectacularly personal,” said Ashley Shick, Bashas’ director of communications and public affairs. “There is a 40-year history of making sure the community is taken care of. The way that we ended up on the nation is a true testament to the Basha family. In the 1970s, the [nation] put a request for proposals out, asking for grocers to step up and help.

“That came across the desk of Eddie Basha Jr. and he called right away and said, ‘We want to be your grocer.’ He had a heart for the community, and we still have that same heart for that special relationship. We never lose sight of the fact that we are guests on the nation, nor do we lose sight of the importance of taking care of the people.”

For most of 2020, taking care of people on the nation has involved helping people navigate the challenges of the COVID-19 pandemic. The Navajo Nation has been one of the highest-hit areas in the country. Members experienced a significant first wave in the spring. Tribal leadership then instituted strict guidelines and shelter-in-place orders, which Shick said seemed to help.

“We really are guests on the Navajo Nation, so we work extremely closely with the nation’s president and vice president’s office, as well as the Navajo department of health, to guide any changes or additions to operations in all of our locations. All the protocols that we put in place – the hand-washing stations, our screenings, our cleaning procedures – will continue for the foreseeable future, until we are on the other side of the pandemic.

“We take every customer’s temperature prior to allowing them access to the store, as well as providing a safe hand-washing station outside each location, as we know many families do not have access to running water in the most rural parts of the nation. We also do a thorough temperature and wellness screening of every team member prior to starting their shift, not allowing anyone to work who does not pass the screening.”

Bashas’ is committed to having at least 95 percent of the employees at those stores come from the Navajo tribe. As of early December, Bashas’ employed 433 members of the tribe. Some of the locations are secluded within the large geographical area of the Navajo nation.

Bashas’ provides many other community services to the Navajo Nation. During the annual Navajo Nation Parade in Window Rock, it gives away thousands of active lifestyle items to parade attendees to encourage healthy eating and active lifestyles. These include bicycles, basketballs, volleyballs and jump ropes. 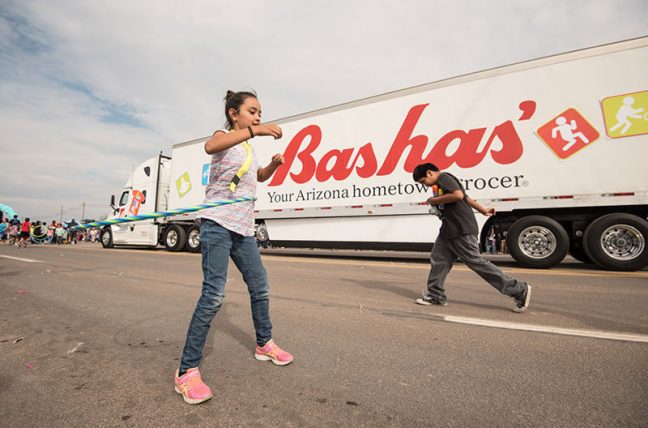 “In-store, we run a program called Diné Healthy, that identifies healthier choice items such as products with low sugar and high nutritional content,” Shick said. “We use display and shelf tag signage so they are easily recognized by shoppers as part of our commitment to supporting healthy options.”

Bashas’ has worked with several organizations, including tribal leadership, to support additional relief efforts for the Navajo community.

The efforts have included: donating tens of thousands of bottles of water; partnering with St. Mary’s Food Bank in its food distribution efforts; and working with the Navajo & Hopi Families COVID-19 Relief Fund to serve as distribution sites for PPE kits to thousands of families. See story, here.

Bashas’ stores also serve other tribal communities, such as the White Mountain Apache, the San Carlos Apache and the Tohono O’odham.

“In a lot of communities, we are the only full-scale grocery store, and that’s a large part of the company’s mission and its heart – to make sure everyone has access to high-quality, fresh foods at fair prices, so they don’t have to travel for hours to get essential items for their families,” Shick said.