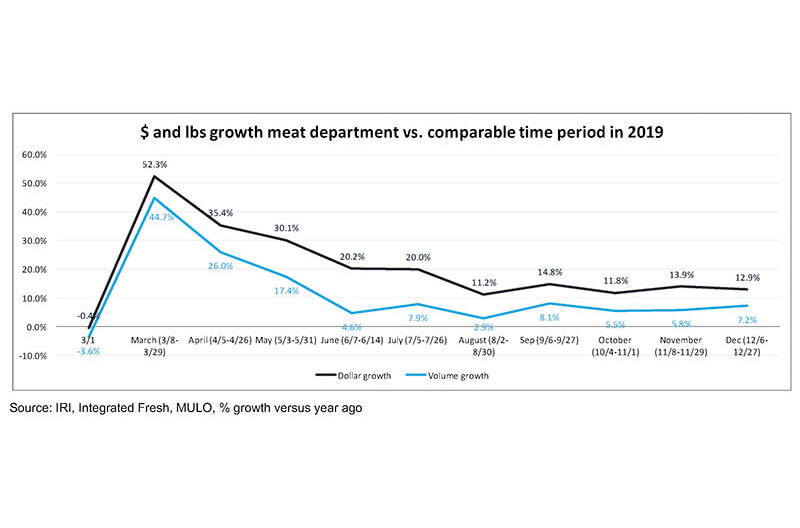 November and December sales were dominated by the holidays along with consumers’ shopping changes in response to the rising number of new COVID-19 cases across many states.

Some states and cities enacted renewed shelter-in-place mandates. This resulted in consumers’ trip frequency falling below last year’s levels, much like it had in early April. Likewise, e-commerce transactions made a return to spring levels.

These were among the findings in the latest report by Anne-Marie Roerink, president of 210 Analytics. Her firm and IRI have partnered to understand the total effect on meat since the onset of COVID-19-related grocery shopping patterns in early March.

According to the report, holiday celebrations were much different for Thanksgiving and the December holidays. There was less travel, smaller gatherings and many consumers shopped much earlier or online to avoid holiday crowds.

But unlike the spring when similar conditions drove grocery sales double digits above year ago levels, December grocery spending was the most subdued it has been since the onset of the pandemic.

December sales for all food-and-beverage-related items (total edibles) increased 8.1 percent versus 2019 levels, which was down from gains of 9.7 percent in November and 8.5 percent in October.

The December sales growth was strong in all the weeks leading up to Christmas. December meat department sales increased 12.9 percent, excluding online-only and delivery e-commerce sales that would have been significantly higher than in 2019.

In some cases, retailers encouraged online shopping to manage traffic flow during one of the busiest shopping weeks of the year. Some provided free delivery, ramped up their curbside order slots and promoted earlier shopping.

Yet, multi-outlet sales the week ending Dec. 27 had the highest gains, at 19.2 percent above year-ago levels, reflecting an additional $275 million in addition to meat department dollars.

The meat department dollar sales gain of 12.9 percent is similar to the sales increases measured since August. As such, patterns seen in the second half of the year are more indicative of the first quarter demand in 2021 than the total 2020 growth.

According to Roerink, the 7.2 percent increase in meat department volume over the levels of a year ago is higher than we’ve seen since August. Dollars and volume trended 5.7 points apart – much closer than earlier in the year.

Fresh meat had higher gains in both dollars and volume during December on a larger base. The gap between dollar gains and volume gains decreased from 8.1 points in November to 5.7 points in December for the meat department as a whole.

The month-to-month IRI insights on the price per pound volume show that November was an anomaly in terms of the total meat department price that was pulled down by turkey. In November, prices were much more in line with the trend line that had started to develop in the second half of the year with prices moderating a bit each month in favor of the consumer.

The average price per volume for turkey rebounded somewhat in December, to $1.99 per pound. This still was far below the typical levels but 75 cents more than it was in November.

During September 2020, Roerink said, 35.5 percent of all meat volume was sold on some type of promotion, whether a circular feature, display, temporary price reduction or any combination thereof. This percentage increased to 36.2 percent in November but came down a bit in December.

For smoked ham, nearly 65 percent of all volume in December 2020 was sold on merchandising. Fresh turkey was aggressive in promotions in November, but only somewhat elevated from October levels come December.

Assortment has nearly completed its comeback after dropping by more than 65 items during some of the tightest supply weeks in May and June, Roerink said.

During December, retailers typically increase the number of items to accommodate for holiday choices.

While the report found that the average number of items per store increased to 539 from September and October levels, assortment remained down 4.7 percent versus year-ago levels although not all new item codes may be tallied just yet.

Gains by protein were stable in the back half of the year. Lamb continued to have the highest percentage gains on its small base, an increase of 34.1 percent versus the same month year ago.

Lamb has kept its monthly gains steady at 30-40 percent over year ago. With restaurants in many states closing back down in terms of on-premise dining, it is likely that more lamb sales will continue to flow through retail in the first part of 2021.

Chicken saw the smallest gains between May and October, but had a strong December, up 11.5 percent. Processed meats had a strong month as well. Bacon and hot dogs led in percentage growth. This is quite an accomplishment for bacon as the largest of the processed meats at $509 million in December sales.

Altogether, meat grinds generated an additional $88 million during the December weeks versus $780,000 for plant-based meat alternatives.

In the latter half of the year, meat department gains have consistently been between 12-15 percent above year ago levels.

According to Roerink, the first quarter outlook for 2021 likely is going to continue to be dominated by news and concern over coronavirus and the vaccine. Expect it to generate similar sales results.

The mid-December shopper survey by IRI found that consumers’ expected length of the health crisis had shortened slightly this month since the vaccine distribution began. However, the majority of Americans are braced for the health crisis to last through most of next year.

Interest in getting the COVID-19 vaccine grew over the past month, with more than half of respondents planning to get it, and more eager to get it as soon as possible.

Still, 22 percent say they will not get it and 23 percent are not sure. Increased interest spanned demographics, with the strongest gains among ages 55 and older and Hispanics.

Shoppers with lower incomes, those without college degrees and younger Americans showed increases versus last month, but remain less interested than their counterparts.