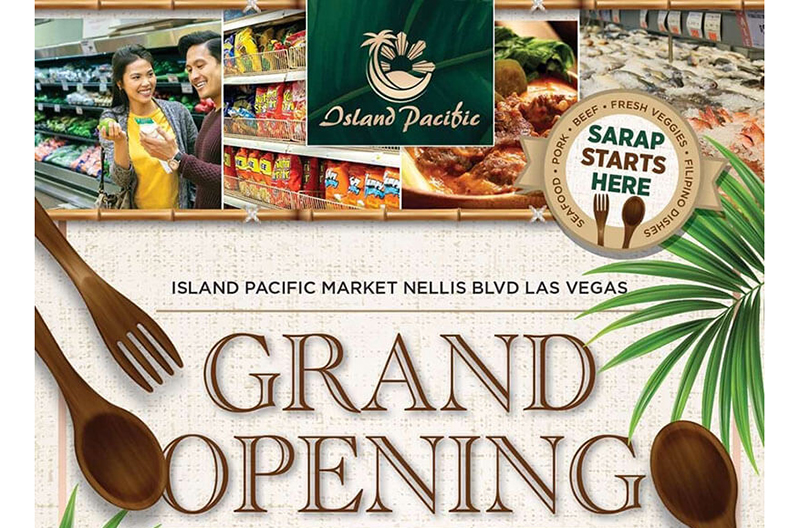 Island Pacific Supermarket, with locations in California and Nevada, has opened its 17th location at 317 N. Nellis Blvd. in Las Vegas, Nevada. This newest location is within 5 miles of Nellis Air Force Base, which employs 9,500 military and civilian personnel with a total military population of more than 40,000, including family members and retired military personnel.

Island Pacific has been popular with the military since it has given a 5 percent daily discount to all military personnel since it was founded in 2000.

The grand opening on Feb. 26 was attended by Nicole Ponseca, Filipino Food pioneer and author of “I Am A Filipino: And This Is How We Cook.” Ponseca is also a successful restaurateur of two groundbreaking Filipino establishments – Maharlika and Jeepney. She has been heralded for promoting Filipino cuisine to the mainstream U.S. market.

According to The Washington Post, “The influence the two restaurants have had on Filipino-American restaurants is immeasurable.” Celebrated as cookbook of the year by The New Yorker, NY Times, LA Times, Saveur, Food and Wine and Chicago Tribune, Ponseca ‘s first cookbook, “I Am A Filipino,” was also recognized by The James Beard Foundation as a finalist for International Cookbook of the Year.

Ponseca’s cookbook also inspired the décor of the newest Island Pacific location. A wall dedicated to her cookbook is prominently displayed in the store as an ode to her pioneering vision for Filipino foods’ place in American society. The chef had her cookbook available for purchase and signed limited copies for customers. Ponseca also gave a cooking demonstration of Pancit Guisado on site that was live streamed on the Island Pacific official Facebook page.

Social distancing and mask enforcement are mandatory at all times during the grand opening weekend.