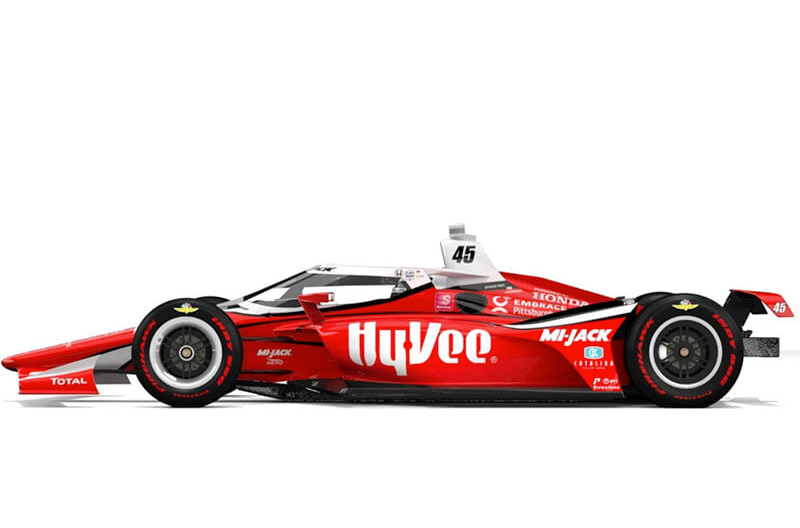 Hy-Vee Inc. – an employee-owned supermarket chain that operates more than 275 retail stores across eight Midwestern states – will be the primary sponsor of Graham Rahal’s NTT Indycar Series entry at Road America (June 20) and World Wide Technology Raceway (Aug. 21), according to Rahal Letterman Lanigan Racing. The West Des Moines, Iowa-based grocer also will be the primary sponsor of the No. 45 entry for Santino Ferrucci for the 105th running of the Indianapolis 500 (May 30), and Hy-Vee will be a full-season associate sponsor on Rahal’s car.

“The excitement and energy that the Rahal Letterman Lanigan Racing team brings forth to our partnership is like none other,” said Randy Edeker, Hy-Vee’s chairman of the board, CEO and president. “The team truly cares about its fans just like we care about our customers at Hy-Vee. Since signing on as a sponsor last year, we’ve heard from people all over the country about our involvement in racing. We know we have a fantastic season coming up that fans across the country as well as our employees will enjoy.”

After two full Indycar Series seasons in 2019-2020 and a partial one in 2018, Ferrucci will join RLL for the Indy 500, where he has been a contender for victory. He was named Indianapolis 500 Rookie of the Year in 2019 after a seventh-place finish, and he finished fourth to race winner Takuma Sato and third-place finisher Graham Rahal in 2020. To date, his best Indy car start is second place at Mid-Ohio (Race 2) in 2020 – he has finished in fourth place four times.

“It’s great to have Hy-Vee back once again,” Graham Rahal said. “I took a lot of pride in representing them last year and felt that the Hy-Vee car performed so well at Iowa and helped get our relationship off to a good start. It’s nice to see a company with such high standards like Hy-Vee consider Rahal Letterman Lanigan Racing and consider the Indycar Series as a great platform to spread awareness of their brand, the quality of their product and their stores. We’re excited to work with them and grow the partnership.”

In 2021, Ferrucci competes part-time in the NASCAR Xfinity Series, driving for Sam Hunt Racing. He will join Rahal and Sato at an open test at Indianapolis Motor Speedway, April 8-9.

The 2021 NTT Indycar Series season begins with the Honda Indy Grand Prix of Alabama (HIGPA), which will be broadcast live on NBC on April 18 at 3 p.m. EDT. RLL won the previous HIGPA race from pole with Takuma Sato in 2019 and Graham Rahal brought the team its first 1-2 start since 2004 there, challenged for the win but retired with mechanical failure. The pandemic led to the cancelation of the 2020 race.

All future on-track action can be seen on NBC, NBCSN or NBC’s Peacock Premium streaming service. For more information about the series or team, visit indycar.com and rahal.com.