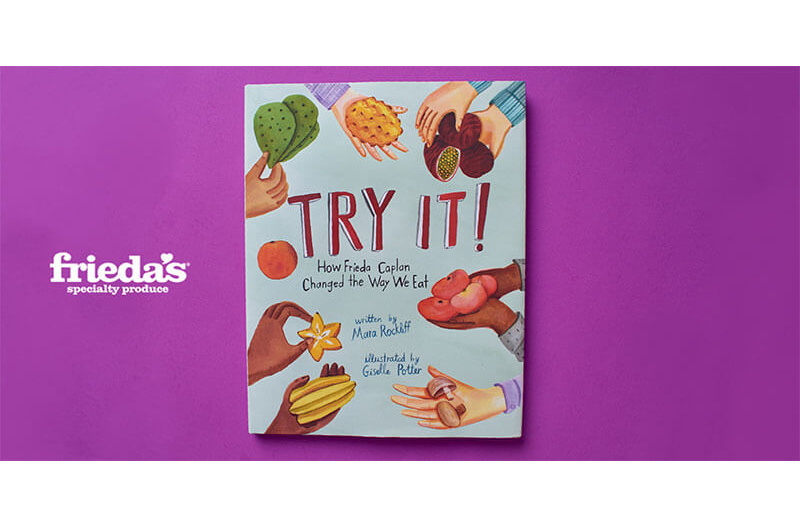 Frieda’s Specialty Produce celebrated its 59th anniversary on April 2 with the release of a new children’s book titled, “Try It! How Frieda Caplan Changed the Way We Eat.”

Authored by Mara Rockliff and illustrated by Giselle Potter, the book celebrates the life of Frieda Caplan – a produce pioneer who introduced different foods to the U.S., from baby carrots to blood oranges and, of course, kiwis.

“Try it! is what Frieda Caplan did,” said Rockliff. “When she started selling produce in the 1950s, there were no women doing what she did. She could have given up and gone home, or she could have followed the men’s lead and sold the same old apples and bananas and potatoes and tomatoes. Instead, she decided to try something new, and she changed the whole industry.”

Frieda Caplan was credited with differentiating her products and building her niche through the clever use of product naming, clear labeling, customer education and interesting recipes, all of which remains deeply entrenched in the company’s ethos.

“My mother always believed in thinking outside the produce box,” said Karen Caplan, CEO and president of Frieda’s Specialty Produce. “In fact, my favorite story is how she was approached by a produce manager to locate what is now known as kiwifruit. She managed to get the first shipment on grocery store shelves, and, as they say, the rest is marketing history.”

April 2 also was Love Your Produce Manager Day, an opportunity to recognize the work done by the unsung heroes of produce and honor their knowledge, hard work and ability to go above and beyond even during the toughest times.

Without produce managers, there would be no calamondins, kumquats, lychees, dragon fruit or other exotic produce.