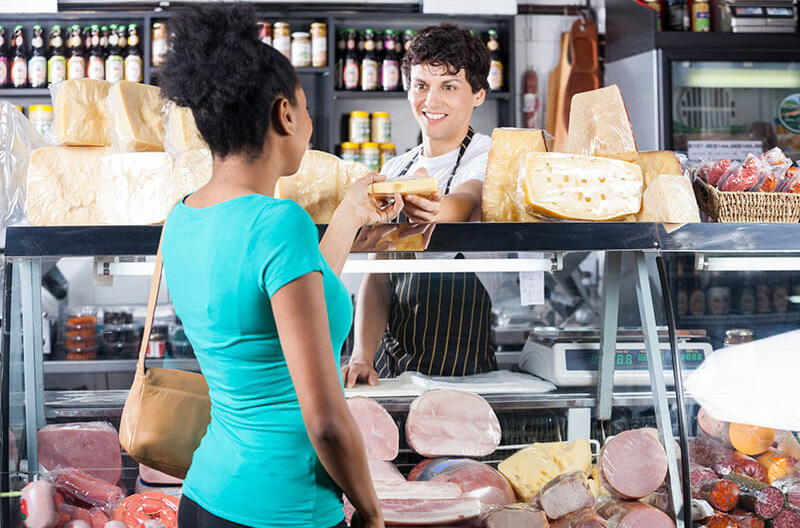 210 Analytics has been analyzing IRI sales findings, made possible by IDDBA, to help understand how dairy, deli and bakery sales are developing throughout the COVID-19 pandemic.

March 2020 experienced the biggest spikes in the history of grocery retailing as the nation bought supplies to fill their freezers, fridges and pantries in preparation for shelter in place.

After an initial flurry of trips in mid-March, the number of store visits fell far below year-ago levels whereas the average basket ring came in well ahead of the pre-pandemic normal.

In March 2021, sales started lapping the enormous spikes and declines of 2020. This resulted in year-over-year dollar sales turning negative for most areas even though the demand stayed well ahead of the 2019 baseline.

“We knew the year-over-year sales picture would radically change come March in going up against the early pandemic spikes of 2020,” Johnson said. “In addition to understanding where sales come in relative to those peak March weeks, it is just as important to track current demand relative to the pre-pandemic normal.

“The country is opening up a little more each day and that will impact consumers’ engagement with deli prepared and in-store bakery, as celebrations and gatherings are likely to start normalizing along with it. For everyday meal occasions, it’s important to understand where that new at-home versus away-from-home spending balance lies relative to pre-pandemic to help our industry with demand forecasting.”

Sales for all food and beverage-related items during the four weeks endings between March 7-28, 2021, dropped to 17.8 percent below the record March 2020 levels. However, total food and beverage sales remained highly elevated from the 2019 pre-pandemic baseline, at an increase of 14.6 percent.

A look across departments for the four weeks ending March 28, 2021, versus year ago shows a down performance for all, with the exception of seafood.

“Dairy was one of the early pandemic powerhouses of 2020,” said Eric Richard, industry relations coordinator with IDDBA. “Very early on, sales for milk, cheese, eggs, etc. spiked to unprecedented heights.

“It’s hardly surprising to see that 2021 sales could not keep pace with those enormous spikes in sales. However, dairy demand remains robust with sales in each of the March weeks easily exceeding the 2019 pre-pandemic baseline. ”

Dairy sales for March totaled $4.5 billion, which was down slightly from $4.8 billion in February. Milk continued to sell more than $1 billion in the four-week period, which was an increase of 7.3 percent versus the 2019 baseline, but a decrease of 17 percent year over year.

This picture was similar for all areas within dairy. Only whipped toppings were able to slightly advance sales over 2020 levels in March, up .9 percent.

“The deli department encompasses cheese, meat and prepared foods and the performance was a story of two tales throughout most of the pandemic,” said Angela Bozo, education director with IDDBA. “From the very start, cheese was a pandemic bestseller, whether packaged or deli cheese, as was deli meat. But deli-prepared struggled once shelter-in-place mandates ensued.

“While deli-prepared has made a big comeback, it never quite got back to pre-pandemic levels. Of course, that means now deli-prepared has an easier time in going up against year ago levels than meat and cheese.”

Deli-prepared food sales increased 7.4 percent over year-ago levels, whereas deli cheese, deli meat and deli entertaining decreased. However, in the grand scheme of things, the declines were much smaller than those seen in meat and many center-store departments.

Deli meat sales (combined fixed and random weight) totaled $567 million in the four weeks of March 2021, which was virtually unchanged from $568 million in February 2021.

Taking a closer look at deli meat shows that grab and go (random-weight, but sliced for self-service) has been the main driver of the deli meat success in the pandemic months, plus continued to track ahead of year-ago levels in March, whereas service and pre-sliced deli meat could not keep pace with the March 2020 sales levels.

Packaged lunch meat had a huge March 2020, which resulted in big year-over-year declines this year. However, when compared to the pre-pandemic 2019 baseline, both dollars and volume were up.

The sales patterns for deli cheese during the four weeks of March 2021 were similar to those seen in deli meat. Sales dropped in comparison to 2020 but increased over the 2019 baseline.

For deli cheese, all areas of grab & go, pre-sliced, service deli and specialty show year-over-year declines. However, the strength of specialty cheese can be seen in the comparison to the 2019 pre-pandemic normal, at a rise of 27.4 percent.

Because of the down performance in March 2020, deli prepared and – to an extent – deli entertaining, had a strong month this year.

“In gearing up for the earlier Easter holiday…meal solutions had a huge gain,” Richard said. “Holiday meal solutions have consistently seen big year-over-year jumps around the holidays and I suspect Mother’s Day will be no different. We also see a comeback for trays pointing to an increase in gatherings and entertaining.”

On the deli-prepared side, many areas tracked ahead of last year’s performance, which led to an overall increase of 7.4 percent over 2020 levels, as well as an increase over the 2019 pre-pandemic normal, at 3.6 percent.

Bakery department sales, including both perimeter and aisle bakery, hovered between $650 million and $670 million the four weeks of March 2021. This represents a slight increase for the first and fourth week of March versus year ago levels, but a decrease during the two panic- buying weeks that cleared out most store shelves. Bakery accomplished nice increases compared with the pre-pandemic 2019 normal in all four weeks.

Split out by perimeter and aisle, bakery underscores the different performance picture of 2020.

Aisle bakery had to go up against a strong March 2020 and fell short by 17.5 percent.

On the other hand, perimeter bakery went up against a down performance in March 2020 and improved 2.7 percent.

With aisle bakery being the bigger of the two, this pulled down the overall March bakery performance to -10.3 percent versus year ago levels.

Baked goods items found in the aisle or center-store area adjacent, but not included in the perimeter bakery area saw significant declines in all three areas as a result of big pandemic sales spikes in March 2020. However, compared with 2019, center store breads and rolls increased 11 percent, desserts and sweet snacks increased 9.2 percent and morning bakery increased 16.7 percent.

A similar pattern is seen at the subcategory level, with a few exceptions. Croissants and muffins increased their sales versus March 2020, but the others saw either modest or significant year-over-year declines. However, all areas still saw increased demand versus the pre-pandemic normal, with big gains for bagels, buns and rolls and muffins versus the 2019 baseline.

The March 2021 perimeter bakery results show the reversal of what’s up and what’s down due to pandemic peaks and drops in 2020. Desserts and sweet snacks took a big hit in March 2020 as a result of shelter-in-place that severely impacted everyday and holiday celebrations with a sweet indulgence.

With Easter on April 4, much of the holiday sales would have fallen in the March calendar month while the 2020 Easter season was heavily disrupted by shelter-in-place mandates in the vast majority of states.

Meanwhile, several indicators of consumer mobility are trending up. In March, TSA checkpoint numbers, OpenTable reservations, Apple driving and walking statistics, gasoline sales, the re-opening of schools and more all indicated a higher level of mobility.

Increased mobility also is likely to result in a shift from home-centric food spending to greater foodservice engagement, but also potential increases in deli-prepared food sales and perimeter bakery sales.