Home » Stater Bros. Teams Up With City Of Hope In ‘Kids 4 Hope’ Campaign 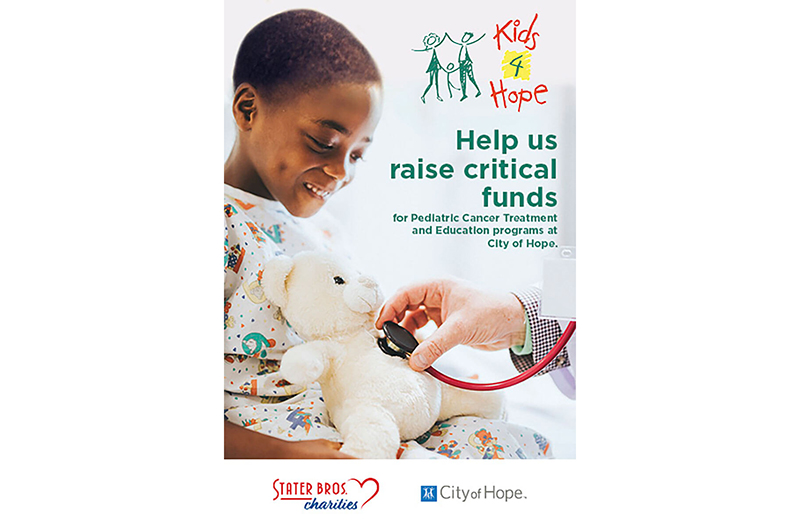 Stater Bros. Markets and Stater Bros. Charities are collaborating with the City of Hope to raise funds for pediatric cancer treatment and education programs in Southern California. A renowned independent research and treatment center for cancer, City of Hope is a world leader in treating blood disorders that occur most often in children, adolescents and young adults, including leukemia and lymphoma, bone, joint and soft tissue tumors and brain tumors.

Between May 5-16, all Stater Bros. locations will be participating in the Kids 4 Hope in-store campaign. Customers can donate at any check stand by adding a $1 or $5 mobile during checkout. Donations are also being accepted online or by simply texting KIDS4HOPE to 41444.

“Stater Bros. is committed to supporting cancer patients in the communities we are privileged to serve. That’s why we’ve partnered with City of Hope to raise critical funds for pediatric cancer treatment,” said Nancy Negrette, chairman and president of Stater Bros. Charities. “According to American Childhood Cancer Organization, more than 15,000 children in the U.S. are diagnosed with cancer each year, and our hope is that this fundraising effort will help make a difference in the lives of these brave young fighters.”

All funds raised throughout the campaign will support pediatric cancer treatment and education programs at City of Hope to address the needs of infants, children, teens and families during hospitalization and outpatient treatment. Programs include: psychological and social, pediatric hematopoietic cell transplant, musculoskeletal tumor, school reintegration and child life.

Stater Bros. was founded in 1936 in Yucaipa, California, and has grown steadily through the years to become the largest privately owned supermarket chain in Southern California and the largest private employer in both San Bernardino County and Riverside County. The company currently operates 170 supermarkets and has approximately 18,000 employees. Since 2008, Stater Bros. and Stater Bros. Charities have contributed more than $80 million in food and funds to local Southern California communities.