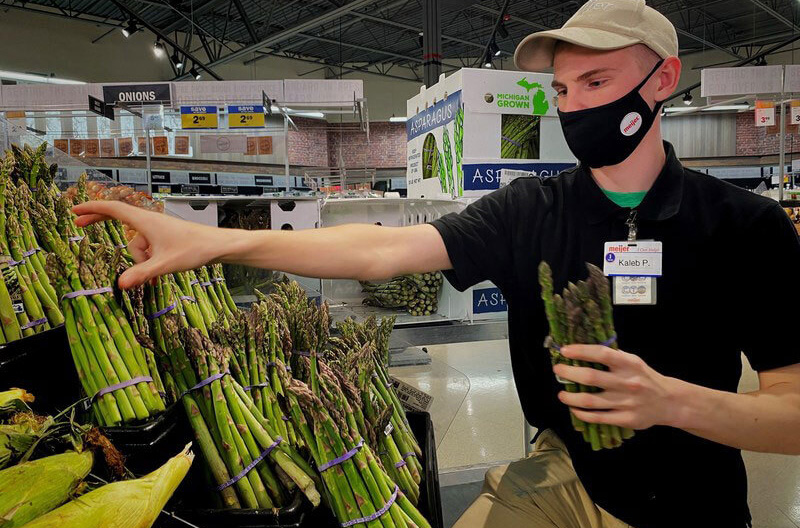 The results of a strong Michigan harvest are helping asparagus find itself on the top of many grocery lists at Meijer stores across the Midwest. The Grand Rapids, Michigan-based retailer saw twice as much asparagus in shopping carts last week, a trend expected to continue as it prepares to sell more than 2 million pounds this summer.

While asparagus season typically begins around Mother’s Day, cooler temperatures delayed the beginning of harvest by about a week, which provided local growers extra time for additional preparation, mowing and fertilization in the fields. That made Memorial Day the perfect time for customers to fill their carts for grilling outdoors and family gatherings.

“Customers at Meijer stores from Bowling Green, Kentucky to Sault Ste. Marie in Michigan’s Upper Peninsula began to take advantage of the late harvest season last week in a big way,” said Scott Calandra, Meijer producer buyer. “Our local growers have done a great job in providing some of the freshest asparagus available. Throughout the summer, the stalks purchased in-store were harvested only a day or two prior.”

Known for being beneficial to digestive and cardiovascular health, the nutrient rich vegetable is best when eaten fresh. After buying, Calandra suggests customers wrap the ends of the stalks in a wet paper towel, place inside a plastic bag and refrigerate. To prepare, rinse the spears under cool water and snap or cut the bottom half-inch off the stalk. The cut ends could be frozen and added later to soup stock.

While the retailer has purchased from local growers big and small since the company’s inception, its effort to buy produce locally has expanded significantly over the past two decades. Today, the retailer works with more than 200 local growers across the Midwest to shorten the time and distance from the fields to the checkout lane.

Calandra said the local asparagus growers Meijer partners with are often family-owned and continue to perfect sustainable harvesting techniques. Because Michigan is one of the top producers in the country, locally-grown asparagus can also be found at stores throughout Wisconsin, Illinois and Ohio.

In Michigan, local growers and suppliers include Todd Greiner Farms in Hart, Richter Farms in Decatur, American Asparagus in New Era and North Bay Produce in Traverse City. In other Midwestern states, Meijer partners with Melon Acres in Oaktown, Indiana, and Alsum Farms and Produce in Friesland, Wisconsin.

“While families cooked at home more than ever last year and were looking for healthier vegetables to add to their tables, this is the year of reconnecting with friends and being outside,” Calandra said. “So, we expect customers will continue seeing the benefits of our Michigan harvest throughout a memorable summer.”