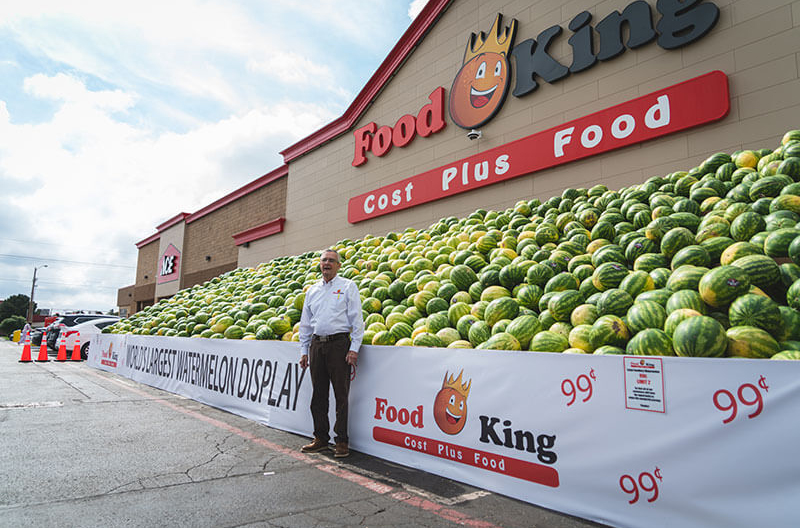 Lubbock, Texas residents were treated to a record-breaking display of watermelons on June 2. The Food King, located on 82nd Street, hosted a watermelon marketing event of epic proportions, breaking a world record for the largest watermelon display.

Although unverified by the Guinness Book of World Records, the Food King display containing 12,825 watermelons and totaling roughly 199,000 pounds was substantially larger than the previous world record held by Cub Foods of Edina, Minnesota. The Food King display contained 2,625 more melons and was more than 42,000 pounds heavier than the previous world record that was set on July 31, 2014, by Cub Foods.

“Once and for all, this proves that produce really can drive store sales”, said John Potter, Food King director of marketing and produce. “This event created excitement at the store not only with customers but our team as well.”

The gigantic watermelon display was built in only one day by a large group of Food King teammates.

“In a marketing area with a draw of roughly 270,000 customers, we had to place a limit of two watermelons per customer. It was one of the greatest traffic drivers I have seen over the course of my entire career,” said Roger Lowe Jr., CEO of Pay and Save Inc., parent company of Food King.

Food King is a wholly owned subsidiary of Pay and Save Inc., which operates 140 stores across Texas, New Mexico, Colorado, Kansas and Arizona. Pay and Save employs more than 5,000 teammates across its operations.