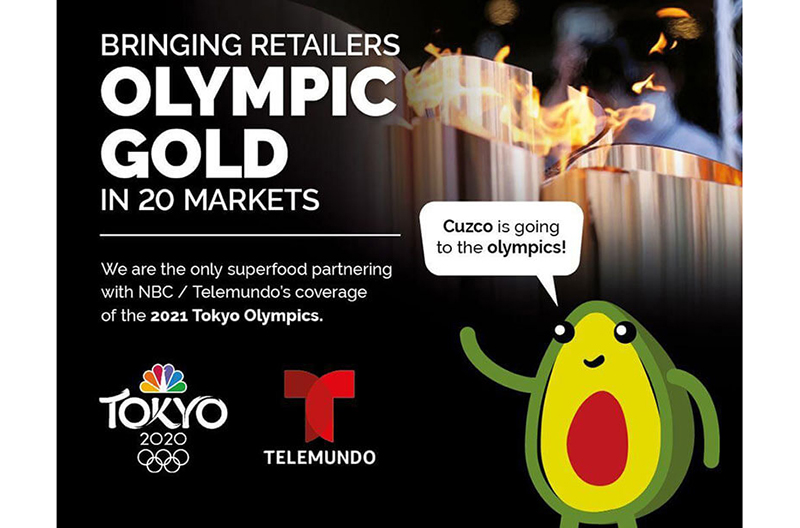 The Washington, D.C.-based Peruvian Avocado Commission, under its Avocados from Peru banner, will feature TV, OTT (via the internet) and digital content of the Tokyo Olympics, to be held July 23-Aug. 8.

The coverage will run in more than 20 major U.S. markets throughout the duration of the Olympics and the rest of the summer.

“People love the Olympics because of the way the games make them feel and, of course, like other super large sports events, because of the TV commercials,” said Xavier Equihua, president and CEO of PAC.

PAC’s TV and digital content will position the avocado as the “superfood of super athletes” centered around playful themes titled “The Champions of the World” and “The World Guacamole Championship.” PAC’s creative spots are designed for maximum impact to feature the availability and healthy value of the Peruvian fruit.

Avocados from Peru is the only fresh produce item offering retail partners the opportunity for television, OTT and digital exposure during the Olympic Games, which are expected to draw a massive television audience. This exposure comes just as avocados shipments from Peru reach their peak volume.

Avocados from Peru will be heavily promoted through Labor Day in the United States, with signature marketing tactics taking place throughout the Olympic coverage time frame. This will be complemented by volumes exceeding 25 million pounds per week.

Peru began its shipments to the United States in late spring. Throughout summer, it will be the second largest supplier of avocados to the U.S., garnering more than a 35 percent market share during peak weeks. One of the points of distinction with the Peruvian fruit is the size portfolio of its offering.

Younger trees, which represent a significant percentage of Peru’s production, tend to produce larger fruit than older ones, thereby affording buyers a full range of sizes to purchase. Growers are committed to strong sustainable farming methods including the use of pure water from melted glaciers in the Andes that naturally irrigate avocado orchards.

Peru’s avocado growers also have increased volume this year and, for the first time, Peru will be exporting 1 billion pounds to more than 40-plus markets word-wide.

Equihua predicts that Peru will send its highest ever volume of avocados to the U.S. market this season, with total volume expected to exceed 200 million pounds during a three-month window. Because of the expected increase in volume, he points out that AFP is in a great position to explore additional opportunities with new retailers and food service operators even though most promotions are already in place with larger retailers in the U.S. market.

Other retail promotions this summer include a more robust instant rebate coupon (IRC) program. PAC was the first association operating under a federal promotion program to introduce the concept of the IRC for produce in the United States. PAC also has established the first marketing program to assist retailers with the sell-in of organic avocados – a first for the avocado category.

PAC was established in 2010 to increase the consumption/demand for Avocados from Peru through traditional and new media, retail promotion and public relations. Its promotional activities are conducted under the guidelines of the federal promotion program for Hass avocados, which is under the oversight of the USDA.

SweetWater Brewing Co. Expands To West Coast With Colorado Brewery
Coborn’s Is The Shelby Report Of The Midwest 2021 Retailer Of The Year