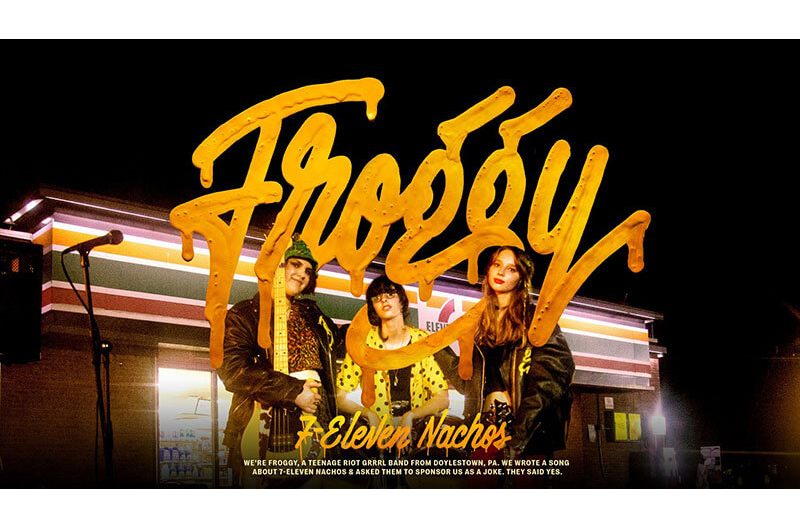 Members of Froggy, a riot grrrl punk rock band out of Doylestown, Pennsylvania, displayed their love of 7-Eleven nachos with the release of their new song and smartphone-shot music video, “7-Eleven Nachos,” in January. Instead of just giving the video a reshare and a comment, Irving, Texas-based 7-Eleven took its social response to a new level.

To applaud Froggy’s creativity and honor the band’s love of nachos, 7-Eleven and Froggy worked together to produce a professional music video of the song – all on the convenience retailer’s dime. The “7-Eleven Nachos” video has officially dropped across 7-Eleven’s Instagram, YouTube, Twitter, Facebook and TikTok channels.

But this is “nacho” typical music video. For one, it’s cheesy – really cheesy, like 200 pounds of nacho cheese, cheesy. Bandmates Morgan, Brooke and Fiona are wearing black leather jackets with a cheesy style twist. As an ode to the song’s original Instagram video, this one was shot at their hometown Doylestown 7-Eleven store, with local customers and the band’s personal friends and family appearing as extras.

“Froggy’s song is over-the-top enthusiastic about their love for 7-Eleven nachos,” said Marissa Jarratt, 7-Eleven SVP and chief marketing officer. “It perfectly personifies our ‘Take it to Eleven’ campaign that celebrates the wild ways our customers make us a part of their daily lives. The music video is our thank-you to Froggy for creatively celebrating something we both love.”

The video also celebrates the return of 7-Eleven’s new and improved nacho cheese, which brings back the traditional style and classic taste by popular demand.

“The song started for fun when we went to 7-Eleven one day to get Nachos,” said Brooke, Froggy bass player and songwriter. “It’s so cool to see that the brand actually loved it and wanted to film a professional video with us in our hometown.”

Customers are encouraged to join 7Rewards for exclusive offers and other discounts. With 50 million members and counting, 7Rewards is the proprietary loyalty program found in the 7-Eleven app, where customers can earn and redeem points on most purchases – including 7-Eleven Nachos.