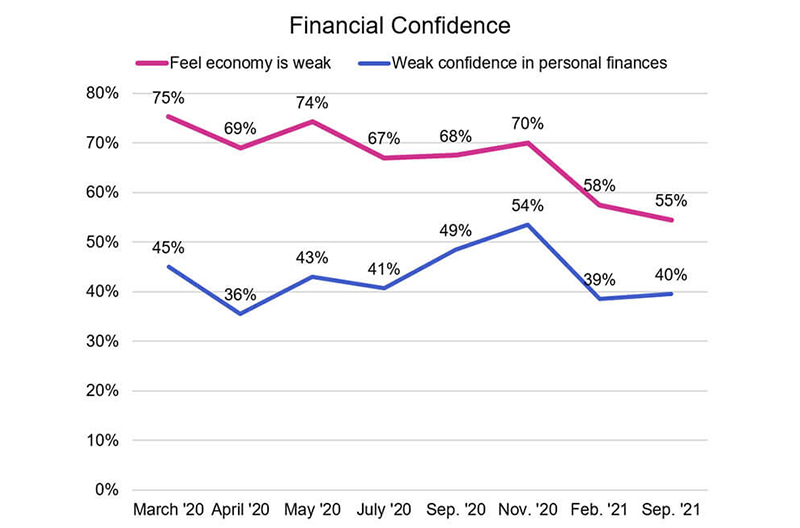 Dunnhumby, a provider of customer data science, has released findings from its 18-month worldwide study of the impact of COVID-19 on customer attitudes and behavior across 24 countries.

Furthermore, 83 percent reported that the government isn’t doing a good job either, marking the lowest point of confidence in the government’s handling of the crisis and the second-lowest globally.

Consumers’ concerns with grocery stores span from worries that things are not returning to normal (76 percent), unvaccinated shoppers in the stores (34 percent) and still extremely worried about the virus (26 percent). Although 21 percent said there was no store that provides good value for the money, Walmart continues to be cited as providing the best value (29 percent), with Aldi (12 percent), Kroger (7 percent) and Target (6 percent) following respectively. Amazon fell out of the top five stores for value and landed with 4 percent.

“After living with the pandemic for 20 months, consumers are now twice as concerned about their personal finances as they are about Covid itself. With inflation persisting and government stimulus’ phased out, the majority of shoppers are now looking for greater value,” said Grant Steadman, president for North America at dunnhumby. “Retailers who are perceived as offering more value and respond to their customers’ increasing need for this, will earn the loyalty of the new customers they gained during the early phases of the pandemic.”

Key findings from the study include:

Just 14 percent of U.S. survey respondents are concerned with data privacy. Only in China and Thailand do more than 20 percent of consumers seem concerned.

Approximately 400 individuals were interviewed in each country for each wave of the study, and respondents were roughly 60 percent female and 40 percent male.

The dunnhumby Consumer Pulse Survey is available for download today.