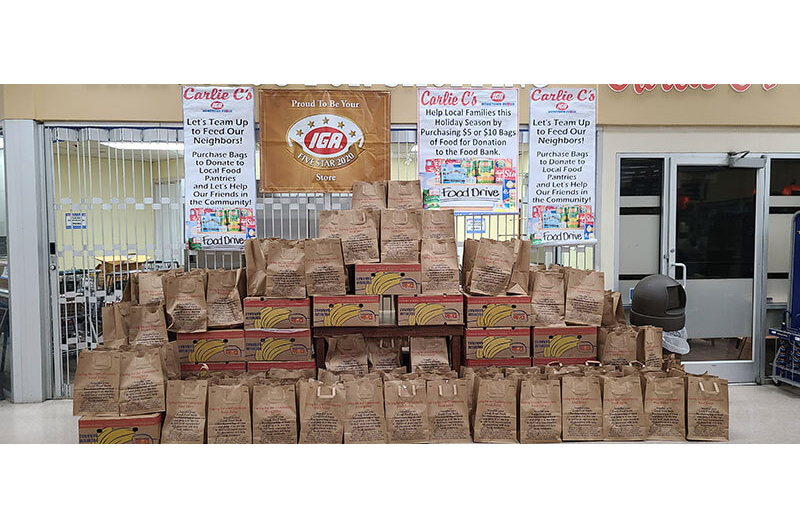 His stores are primarily in the eastern part of the state, however the new ones will be more central. A store in Graham opened the week of Sept. 27 and a Ramseur location was ready by mid-October.

McLamb is looking to grow the family business, which his parents started in 1961. “I’m a second generation and there’s a third generation behind me that’s looking to be in the business as well,” he said, adding that his son and daughter have joined him.

As for other goals, the company is in the process of evaluating stores for possible improvements next year.

“But ours is a slow, methodical growth of planned over the next several years. We’re an opportunistic buyer of assets,” McLamb said. “And so typically, we’re buying existing operations or existing facilities. Although we probably will build our first ground-up store in more than 30 years.”

McLamb is optimistic they will begin building this replacement store in Coats, North Carolina. Carlie C’s IGA stores are in a mix of communities, from rural to large suburbs. Their digital options also cater to varying demographics.

“We run digital ads we market to people, and we offer e-commerce when we deliver in every market that we do business. We offer online SNAP reimbursement as well,” he said.

When COVID-19 first hit the state, SNAP use “shot through the roof” and continues to be popular with customers.

“If COVID gets a little worse, you can tell the orders start to pick up,” he said.

McLamb mentioned that Amazon and Walmart were the first two retailers to offer SNAP online in North Carolina, with Carlie C’s the third.

“We’ve been very fortunate, we partnered with Freshop to do our e-commerce…there was a lot of challenges and bugs and all that kind of stuff to work out. But for the most part, I’m really satisfied with that portion of our business. It seems to be working well. We don’t have big issues or anything currently.”

McLamb advises any grocers who have not implemented e-commerce to do their research and see how they can best fulfill customers’ needs.

McLamb referred to the supply chain for his Carlie C’s stores as “sporadic,” with different areas getting hit at different times as “supplies are being cut or inventory is being cut or is being moved from one item to another.”

The latest challenge has been with septic items, he said. Vendors are not able to get the packaging they need. There have been some issues with tobacco products and he foresees woes with getting canned fruit in stores.

“Next week, it may be something different. And it can be for a variety of reasons,” he said. “It can be for equipment. It can be that they have staffing issues. It could be that they’re trying to get something from China…which is very expensive and hard to get right now.”

“You’re constantly having to make adjustments and changes and trying to source product from maybe places you haven’t sourced it from in the past. It’s just the new norm right now…the vendors are having a very difficult time because they have the same challenges we have…staffing, being able to get equipment, being able to repair equipment, those type of things. All of those are severe challenges.”

McLamb noted that the labor concerns around the trucking industry have worsened. Although he sees companies investing in automated driving, which has piqued his interest.

“Maybe if those trucks can start doing some of the long runs, maybe that’ll free up enough drivers to be able to make the short runs,” he added.

With all things considered, McLamb thinks things have gone “really well” for his Carlie C’s stores.

“We’ve had two incredible years…we’re grateful, we’re continuing to invest a great deal of money in remodeling and improving our stores,” he said. “I think we’ve made a great process. But this is a challenging environment, but it’s also a very good one as well.”