Home » Sharing Stories Of The Fresh Market And Its Team Members 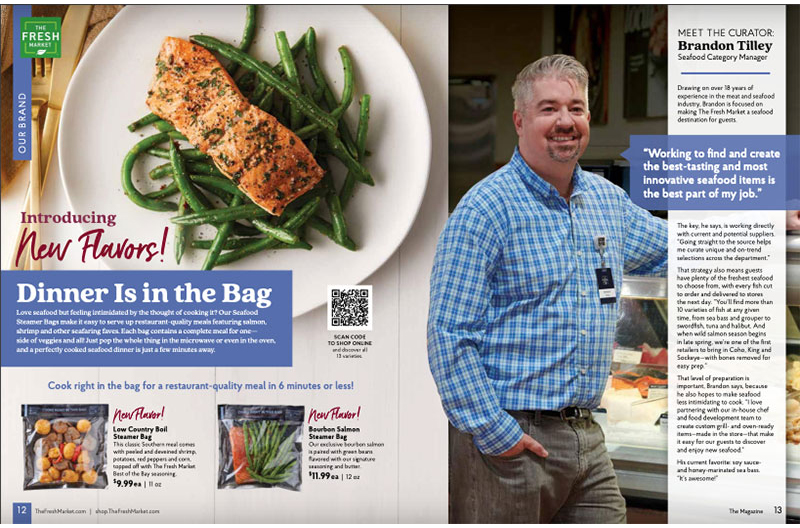 The Fresh Market Magazine was created during the COVID-19 pandemic as a way to bring the store to the specialty retailer’s guests, sharing its stories while they stayed home more, according to Gloria Reardon, director of products, occasions and meal solutions.

“I would say our brand is a very experiential brand – you have to be in the store and see it, smell it, touch it. It’s a place to explore, if you’re very interested in food,” Reardon said. “We’re very trend forward.”

She said Chief Marketing Officer Kevin Miller thought a magazine would be “a great way to let people shop our stores without having to leave the comfort or safety of their home at the time,” she said. “…It’s been an evolution ever since it launched.”

Miller said he thought a magazine could tell the stories of The Fresh Market in detail and in a way that would be engaging and entertaining.

“If you’re going to be about bringing together and curating the world’s best foods and hard-to-find foods from around the world, you’ve got to tell stories…you’ve got to educate [the customers] but also entertain and engage them,” he said.

Miller had noticed the marketing team was “terrifically talented” in photography and other areas, which he viewed as an opportunity to create “one of the world’s best food magazines.” The idea was to make the store come alive in the magazine, which features florals up front, then produce, seafood and other departments. “It’s like walking through the store on your couch,” Miller said.

The content is “an amalgamation of a few things,” Reardon said. “We incorporate trends and what’s new, what’s hot,” she said. “The other piece is the merchants also bringing in new products or new things that are trendy or the newest flavor.”

It also plays into a national trend calendar Reardon puts together. “All of this feeds into the idea bucket – basically, prioritization of message and then what do we really want to focus on at that time of year,” she said. 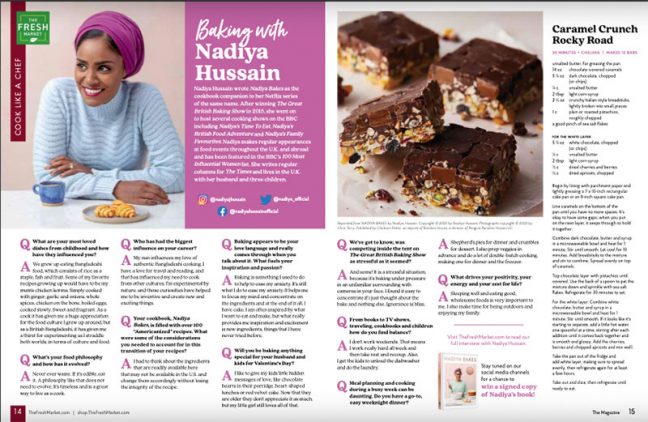 The magazine also shines a spotlight on people as it features interviews with celebrity chefs and team members of The Fresh Market.

For example, for the June 2021 issue, Marcus Samuelsson was featured and the interview focused on Juneteenth.

“We wanted to talk about it, but we wanted it through his perspective, his lens,” Reardon said. “And he also has Red Rooster, which is one of the most prevalent soul food kitchens in Harlem. He had just launched a new book [which is] about soul food.”

The magazine uses its monthly features to talk about diversity and bring culturally diverse chefs onto the stage along with their innovative ways of preparing food.

“We had Shirley Chung in the magazine for November,” Reardon said. “She talked about Chinese heritage cooking, and we gave away some of her cookbooks.”

Miller said the brand is “all about food, folks and fun,” which is why employees are featured in the magazine.

“The idea is to really give a personable nature with the brand and show the people who are behind the curation of our products and just talk about them and their experience and history with the brand,” Reardon said. “This month, it’s Brandon Tilly. He’s our seafood guy, category manager.” 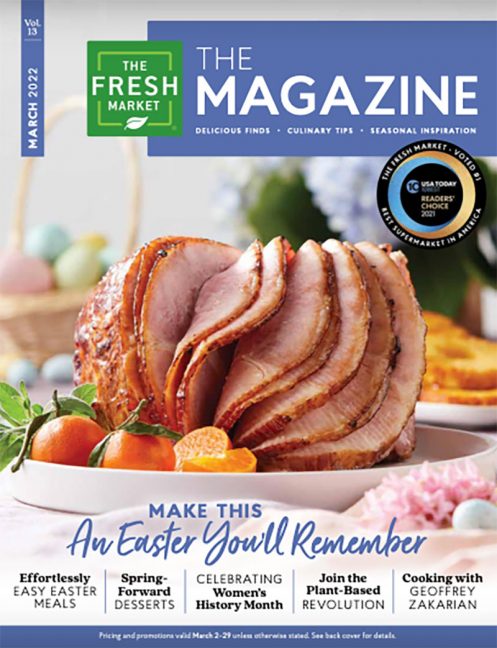 In addition to the food, products, meals and people in the magazine, recipes appear throughout. Besides chefs on the team, many of the employees are foodies who help with recipe development.

The grocer also hires consultants and others to develop recipes, especially if the team is trying to “hone in on a specific flavor or figure out the best way to use a particular ingredient or find a new way to use something,” Reardon said.

The team makes sure the recipes work.

“They’re run through a litmus test that’s pretty rigorous,” Reardon said. “Before we publish it, we make sure that it absolutely works.” This includes converting measurements from recipes from international chefs to the American equivalent.

Also, The Fresh Market Magazine uses QR codes with many of its recipes. “If there’s something that you want to cook, when we have things all merchandised together, you can hit a QR code and you can shop by recipe,” Reardon said.

“This takes the print content to create stories and be informative and inspirational to guests about food, especially in a time where people are at home, they’re cooking more, they’re looking to try new things. Through the lens of digital, that’s the place where they could learn about these new things,” Reardon said. “It’s still evolving.”

As Miller noted, “You’ll see that we repurpose the content in the magazine. The storytelling in the magazine is used for our emails, our social content, outdoor ads – it’s throughout. There’s a consistent message, look, feel, tone and down to the last word of the copy that comes from and emanates from the magazine that we use across all our platforms.”

Another area of integration is between the magazine and The Fresh Market app.

Reardon said much of the groupings of food and/or products and/or topics are frequently created as collections.

“We’re creating collections so people can be very particular with how they shop,” she said, adding that a big trend is that more people are shopping with their values.

Miller said there is a lot of integration with QR codes. As customers read the magazine, they can create their shopping list and buy from their phone, via the app.