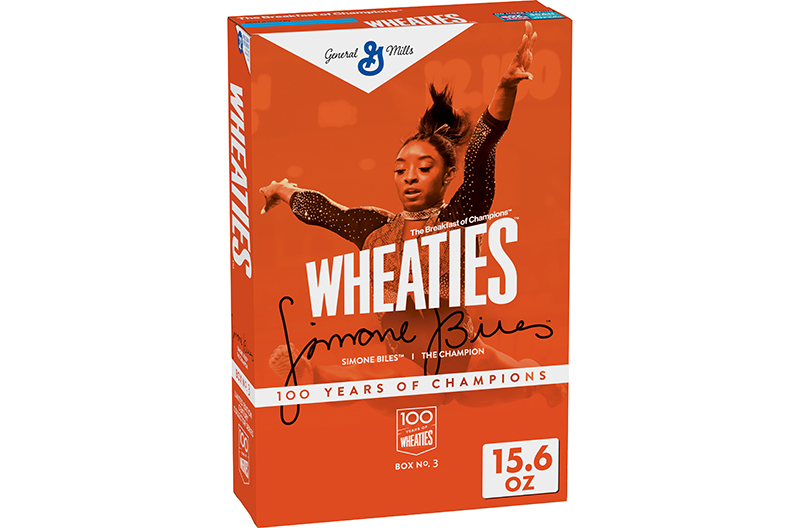 In honor of its 100th anniversary, Minneapolis-based Wheaties is featuring gymnast Simone Biles as the finale box of its Century Series and year-long commemorative celebration.

Biles’s accomplishments include a record-breaking seven National All-Around titles, three consecutive and five overall World All-Around Titles, seven Olympic medals and pioneering four gymnastic skills named in her honor. But Biles also uses her platform to advocate for mental health reform and vigorously campaigns in support of efforts to provide education and assistance to children in the adoption and foster care systems.

The Wheaties year-long anniversary celebration culminates with Biles’s first appearance on the orange Wheaties box, available at retailers across the country. Like previous Century Series box athletes Muhammad Ali and Michael Jordan before her, Biles will also appear on a Gold Foil Box later this summer. These special collector’s boxes, available online, have previously sold out in as little as 30 minutes.

“Simone is so much more than an awe-inspiring gymnast – she’s an advocate, a teammate, a role model and the embodiment of both the future of sports and a Wheaties Champion,” said Kathy Dixon, senior brand experience manager for Wheaties. “We are so incredibly excited to be able to debut her very first Wheaties box as part of our 100th anniversary celebration and honor her alongside other legends like Muhammad Ali and Michael Jordan.”

The partnership with Biles will also extend beyond the 100th anniversary boxes. Fans can find updates online through its website and on its Instagram for the release date of the upcoming Gold Foil Box later this summer.

“I’m thrilled to appear on my first Wheaties box and so honored to be a part of the iconic brand’s 100th anniversary,” Biles said. “I appreciate this special recognition as I want to help continue to advance what it means to be a champion, and advocate for the things I believe in both on and off the mat.”

To celebrate the centennial, Wheaties is honoring sports icons and their stories of accomplishments on and off the court. Earlier this year, the series kicked off with Muhammad Ali, commemorating the late boxer’s achievements in and out of the ring, followed by Michael Jordan’s 19th appearance on a Wheaties box.