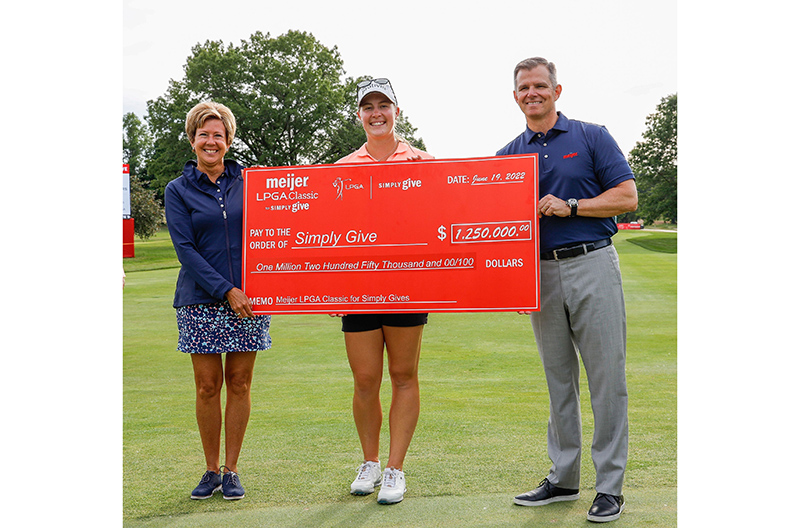 Meijer held its 2022 Meijer LPGA Classic for Simply Give June 16-19 at the Blythefield Country Club in Belmont, Michigan. Jennifer Kupcho won the event, which surpassed its increased fundraising goal.

Tournament officials announced the event generated $1.25 million for the Meijer Simply Give program, surpassing its increased goal. This donation will help stock the shelves of 262 food pantries the retailer partners with across the Midwest as they experience greater need amidst ongoing economic challenges.

Including this year’s event, the Meijer LPGA Classic has generated $8.65 million for Simply Give.

“In so many ways, this was our best tournament yet,” said Rick Keyes, president and CEO of Meijer. “Our community has always played a major role in the success of this event, but for them to rally around this cause and help us not just meet, but surpass an ambitious goal, is incredibly humbling. We’re grateful for the ongoing support of the players, community and volunteers who made this week possible.”

In the second victory of her LPGA career, the 25-year-old Wake Forest University alum shot 71 to finish at 18-under 270 and won in a two-hole play-off against Leona Maguire (65) and defending champion Nelly Korda (72).

Kupcho said the local community played a major role in her tournament experience, specifically thanking her Grand Rapids, Michigan-based host family for their support. “The crowds were huge…they always are at [the Meijer LPGA Classic],” she said. “I think Grand Rapids does a great job bringing awareness to the LPGA.”

The tournament drew record-setting attendance this year to watch an elite international field of 144 players headlined by nine of the world’s 10 best golfers compete.

“On behalf of Meijer and everyone at the tournament, we congratulate our newest champion Jennifer Kupcho,” said Cathy Cooper, executive director of the Meijer LPGA Classic. “We’re honored to once again name such a high caliber professional as our Champion and commend her for an exciting and strong performance through the very end.”

In addition to the $1.25 million raised by this year’s event, Meijer will donate $25,000 to a hunger relief organization of Kupcho’s choice as part of a tradition the retailer started in 2021. Last year’s winner, Nelly Korda, chose to keep her inaugural donation local to the tournament by supporting Kids’ Food Basket in Grand Rapids, Michigan. Details on Kupcho’s donation will be shared in the coming weeks.

For more information on the Meijer LPGA Classic for Simply Give, visit meijerLPGAclassic.com.