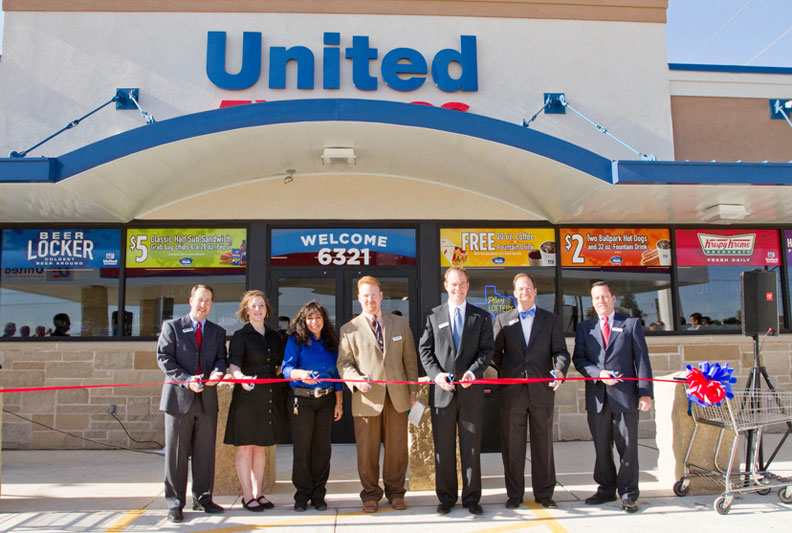 United Supermarkets officially entered the convenience market with the ribbon cutting of its first United Express location at the southeast corner of 4th Street and Milwaukee Avenue in Lubbock on May 4.

The location includes a six-pump fuel station and features fresh offerings along with the traditional items one would expect to find at a convenience store.

It is, generally, a new concept for the company, the fourth phase of the company’s growth in the fuel/convenience business since it opened its first fuel station in 1997.

“We’ve built a strong and well-respected name in the retail fuel business and are especially proud of our proprietary brand (United Express),” said Tony Crumpton, EVP of facility, fuel and supply for United Supermarkets LLC. “We’ve also enjoyed excellent results with our A Taste of Market Street concept.”

“Northwest Lubbock is truly underserved when it comes to both groceries and fuel, so we as a company are very excited about the opportunity to serve our guests from a new location in a new part of town for us,” Crumpton said.

The 4th and Milwaukee development has run parallel to one in which United is expanding many of its existing fuel kiosks into small “c-stores” with product offerings directed at guests on-the-go. Four existing fuel stations—at Market Street (50th and Indiana), Amigos (N. University) and United (82nd and Frankford, 82nd and Boston)—have been expanded with the new concept in mind.

“Our goal with United Express is to take the offerings and products, such as prepared foods, which have been most successful in our A Taste of Market Street stores, as well as those on-the-go convenience items, and blend them where guests will see traditional offerings with a unique United flair,” said Chris Bridgford, director of fuel and convenience operations.

“If a guest wants to come in and get a bag of chips and a soft drink, they will be able to do that. But if they are looking for a nice tossed salad or some other quality meal solution, those are available as well—and those are the items you don’t typically find in a convenience store,” Bridgford said.

United Express is the first phase of development for a 12.1-acre tract at 4th and Milwaukee, which United purchased in 2008 as a site for potential future development. In addition to approximately 36,000 s.f. of space available for retail development, plans call for the company to open a full-size United Supermarkets store on the site within the next three years.

Now in its 95th year of operation, United Supermarkets LLC is a Texas-based, family-owned grocery chain with stores in 30 markets across north and west Texas. A self-distributing company with its headquarters in Lubbock and distribution centers in Lubbock and Roanoke, United operates 51 stores under four distinct formats: United Supermarkets, Market Street, Amigos United and United Express.