Williams, who has struggled sleeping for years, worked with scientists and Sheets Brand partners to develop a product with only natural active ingredients. 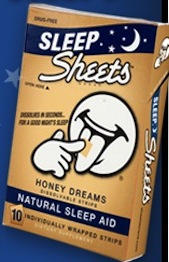 Each Sleep Sheet contains 3mg of melatonin, 3mg of L-Theanine, 1mg of goji berry extract and 1mg of chamomile extract.

“As an athlete and businesswoman, I’m continuously on-the-go and have had issues sleeping for years,” said Williams. “I’ve tried other products in the past and I am happy that I helped develop Sleep Sheets. Using them allows me to get a good night’s sleep, which means that I wake up feeling refreshed and ready to start my day. As an added bonus, Sleep Sheets are extremely portable and conveniently packaged so I can take them anywhere, which is perfect for my lifestyle.”

“We kept hearing from consumers that they dislike swallowing pills and consuming beverages before going to sleep. With that in mind, we created Sleep Sheets as an alternative delivery system,” said Warren Struhl, CEO of PureBrands, owner of the Sheets brand.

“We’re thrilled that Serena has joined the Sheets team and played an influential role in the development of our new Sleep Sheets product,” said Jesse Itzler, co-founder of PureBrands. “After the overwhelming success of Energy Sheets, we’re excited to launch Sleep Sheets and help the millions of people who struggle with sleep issues.”

To coincide with the product launch, Sheets Brand has teamed up with Walgreens exclusively to develop the “Dreams Come True” with Sleep Sheets promotion.

Through July 31, consumers who purchase Sleep Sheets from Walgreens will have the chance to win a day with Serena Williams: an all-expense paid trip for two to New York City as well as an opportunity to meet the tennis star.

As part of the promotion, instant-win golden tickets will be randomly inserted into Sleep Sheets packages. In addition, every package contains a second chance sweepstakes which will allow fans to activate the promotion online at Facebook.com/takeasheet and win more than 1,000 other prizes such as Sheets branded t-shirts and hats.