Home » O’Connor: There Is No Middle 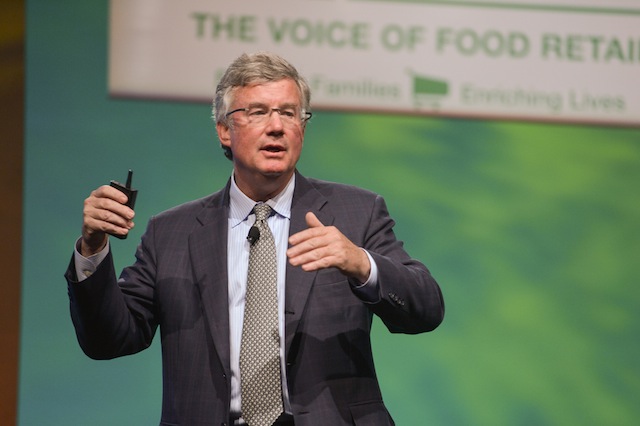 Profound changes in birth rates, household size, the role of women in the workforce, wage growth, longevity and the “deferral” mindset of the younger generation all are societal changes consumer package goods (CPG) companies and retailers must consider as the market becomes more segmented than ever before.

“This is a topic that every organization needs to spend two days on,” said Dan O’Connor, president and CEO of RetailNet Group, who spoke on April 30 at FMI 2012: The Food Retail Show, which was held in Dallas.

His presentation, “2020 Retail: The New Conversation for Retailers and Suppliers,” outlined what led to the segmentation and offered a peek into the future as well.

The question O’Connor said businesses must ask is whether there is a structural change in the labor market. At RetailNet Group, the answer seems to be that 40, 42 percent employment may be the future, he said.

That can vary, of course, because each state has its own economy. To break it down to a state level, California, Florida, Arizona and Nevada are already at a ratio of one and a half worker for every two or three not in the workforce.

Break it down further, and those 50 very distinct economies are segmented between those with an education and those without.

“I think everybody here in the room knows that for those people who have graduated from a four-year college, the employment rates are around 95 percent, and the balance of the unemployment or the underemployed is, in this marketplace, increasingly biased to those that are not educated.”

Then, looking at those who are employed, there is segmentation in household incomes and purchasing power. Increasing government involvement in the food market has made an impact, too, by way of the supplemental nutrition assistance program (SNAP) and the nutrition program for women, infants and children, (WIC).

The face of the customer is changing, too. It is more masculine.

“Retailers who may be targeting that part of the population that is not the top 40 percent but the bottom 60 percent may find over time that we’re really marketing as much to men as the person who is doing the housework as we have been over the last 30 years marketing to women, perhaps, inside the store,” O’Connor said. With a low 1.3 percent birthrate in the U.S., real population growth will have to come from immigration. America has 5 percent of the world population, but 25 percent of the world’s net immigration.

As people come to America and have children, demographics change within the ethnic subgroups. Segmentation occurs even around the holidays that different generations of ethnicities celebrate. The products they prefer are different depending on whether the shopper is of the first, second or in some cases third-generation in America, O’Connor said.

“This requires so much more understanding,” he said. “The transitions of birth rates, immigration, multiculturalism—there is significant change going on in the household structure, and this sets up the discussion between brands and retailers in terms of what we should be thinking about for the consumer in 2020.”

One things is for certain, and that is that the average age of shoppers is going up. That is good to a point, but at about 55 to 60 years of age, consumption begins to decline. The average age in the U.S. today is 38 to 40.

The younger generation is putting off marriage, having children and home ownership.

“‘Deferral’ is a defining word for this next 10 years,” O’Connor said. “It changes and it reduces the number of triggers that people have in their household that drive consumption.”

These societal changes—multiculturalism, life expectancy, purchasing power, urbanization, health and wellness—deeply impact the route to market and the products that consumers are going to buy, he said.

“Can you still market down the middle? Or have we reached a place where economically we have a segmentation that’s under way by education, by employment, by household income?” O’Connor asked. “Mass marketing down the middle is likely to miss because of multigenerational differences, multicultural differences and people who are increasingly arrayed across a very wide income spectrum.”

Technological changes, too, are no small matter. Smartphones and other smart devices are making it much easier to track consumer purchasing patterns. Consumers are using retail shopping applications to track, order and “auto-replenish” products in the home.

Large-scale supercenter operators will have to figure how to compete with that, how to price and how to promote products in the store.

“Digital has the capacity to drive margin out of entire categories of merchandise,” O’Connor said. “When you look at categories like electronics, baby, apparel, they are not just important because they bring in a nice margin; they also bring a nice consumer into the store.”

Grocery retailers have something of an edge here, because products they carry are more difficult to sell in a direct-to-consumer model.

Still, brick-and-mortar stores will have to be redefined, he said.

He sees North American retail chains that sell more than $1 billion annually taking from slightly more than 60 percent of market share to 70 percent of all measured retail by 2020 (leaving 30 percent for independents). Big-box stores in North America are really only holding share or even slightly losing share, he said

He also believes the retail industry will have more capacity than is required to serve the population.

“This marketplace between now and 2020, not necessarily in food but across all retail sections, will go through a form of rationalization,” he said. “What will be logical is that people will increasingly find ways to segment and find new ways to compete.”

The players that are really defining the market today to find the market of the future by sales or growth are Amazon and Apple, O’Connor said.

“In a low-population growth market, where increase in sales comes largely through pricing, not through consumption, as the population ages, as the population urbanizes, we believe volume goes from big boxes to smaller boxes to digital,” O’Connor said. “If you look at conservative growth rates across those three sectors—big, small, digital—you will see that digital continues to grow at a pace that’s three or four times what a big box does.”

Small stores are becoming more popular, with some positioned around fresh and others around an edited assortment.

“Both of these boxes can work in that they are proximate to the consumer, and they are part of the small-store phenomenon here in North America,” he said.

The discount sector is growing as well. These are the chains, like Dollar General, that have “really benefited from the government involvement in the food industry,” O’Connor said.

What will retailers have to do to in response to greater segmentation? One thing that everyone must do is get better at consumer insights.

“The whole notion of understanding who our shopper is and really being able to activate that shopper will be part of our vocabulary,” he said.

He described a model he’d recently seen that married credit card data with lifestyle data, information from real estate companies and from Equifax. He ran the model with a Florida grocery retailer and found out who its biggest competitors are in terms of shopping trip frequency.

They weren’t other grocery retailers.

“We’re competing in this instance, in this particular market, against the quick service restaurant,” he said.

A pet specialty store was next on the list.

He also said that everyone will be challenged to consider their store networks—how many stores, what type of stores, how they’re positioned and how they operate. Consumers expect commerce anywhere, O’Connor said.

“I believe the role of the retailer will change significantly in the next 10 years,” he said. “Retailers have historically brought brands to consumers. As retailers, we will have to find a way to bring the brands to the consumer where they want to buy.”