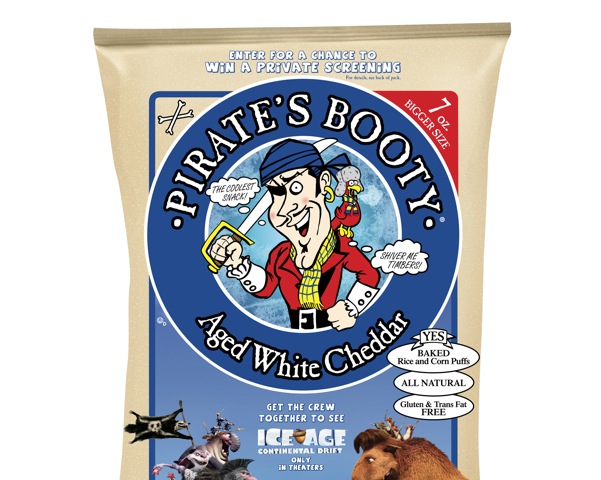 In “Ice Age: Continental Drift,” Scrat’s nutty pursuit of the cursed acorn, which he’s been after since the dawn of time, has world-changing consequences—a continental cataclysm that triggers the greatest adventure of all for Manny, Diego and Sid. In the wake of these upheavals, Sid reunites with his cantankerous Granny and the herd encounters a ragtag menagerie of seafaring pirates determined to stop them from returning home.

“Pirate’s Booty is excited to be partnering with this summer’s most anticipated family film, “Ice Age: Continental Drift,” and Twentieth Century Fox,” said Eric Berniker, Pirate’s Booty VP of marketing. “The ‘Ice Age’ franchise is full of family fun, adventure and humor and as the latest film features pirates, it’s the perfect fit for Pirate’s Booty. We, at Pirate’s Booty, are proud to be giving consumers a chance to ‘catch the drift’ on healthier, fun and delicious snacking with the release of our limited edition ‘Ice Age’ 7-oz. package.”

Pirate’s Booty Aged White Cheddar is a baked, all-natural snack made from puffed rice corn and blended with real aged white cheddar cheese. Pirate’s Booty has half the fat and fewer calories than regular fried potato chips, so it’s a snack that kids and moms agree on. Pirate’s Booty is also trans-fat and gluten free. The limited edition “Ice Age: Continental Drift” 7-oz. package will be available at retailers nationwide through July 31.

Also as part of the program, Pirate’s Booty is offering consumers a chance to win a hometown private screening of “Ice Age: Continental Drift” for the entire crew through the “Enter the Age of Healthier Snacking Sweepstakes.” Consumers can enter for a chance to win by texting PIRATE to 82257 or on Pirate’s Booty’s Facebook page at www.facebook.com/piratesbooty.