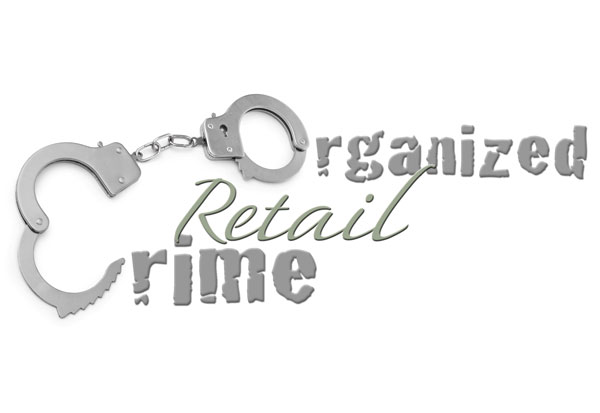 Organized retail crime (ORC) involves a criminal network made up of many people who steal large quantities of goods from retailers and later resell the products, and it is a growing problem for U.S. retailers, costing them $3.53 billion in 2010, according to the National Retail Federation (NRF).

Thomas Martin is well known for his knowledge of white-collar crime and electronic eavesdropping as well as for his interview and interro­gation techniques. The former federal agent once witnessed a massive potato heist as he and his associates performed a surveillance operation for a large company in San Francisco.

“In the supermarket industry I guess our biggest (stolen products are) soda pop, energy drinks, packaged meats and, believe it or not, chips. It’s so stupid to steal chips because they are in huge boxes,” said Thomas, president of Martin Investigative Services.

“We ­followed trucks from San Francisco and Los Angeles and Orange County, and they would take the stuff down to the border near Otay Mesa (California) and actually unload it there and put it on trucks and take it across the border. We had 40 people on that ­surveillance.”

From creating special bags to trick anti-theft sensors to distracting store personnel and even resorting to violence, criminal groups continue to come up with new ways to steal from retailers.

“We’ve seen organized retail crime, or the theft of goods for profit, resale or barter, for many years now,” Joseph LaRocca, senior adviser on asset protection for the NRF, wrote in a recent blog. 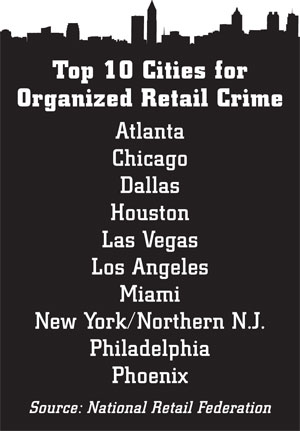 In March, it was revealed by several major news sources that Tide laundry detergent was specifically being targeted by thieves and was being sold online and on the black market. A recent raid on the home of a suspected drug dealer in Washington, D.C., turned up not only ­cocaine but also nearly 20 large bottles of liquid Tide laundry detergent. Turns out, his ­customers were ­paying for drugs not with cash but with stolen Tide, ­police said.

The detergent is attractive to thieves because it comes at a high price point for the supermarket and never spoils.

As a deterrent, some CVS pharmacies in the Washington, D.C., area have been attaching electronic anti-theft tags to bottles of Tide.

Procter & Gamble, the maker of Tide, was baffled that the brand has received so much attention from thieves.

“We don’t have any insight as to why this has ­apparently happened,” P&G spokeswoman Sarah Pasquinucci was quoted as saying.

The NRF said that Tide was not listed specifically on its list of top items targeted by ORC groups in its 2011 ORC survey; however, it does fit the profile.

Other common items thieves target include baby formula, DVDs and ­smoking cessation products. The goods are then sold on the internet, often through online auction sites, ­according to Martin.

No retailer is exempt

LaRocca also said in his blog that ORC ­affects virtually every ­retailer in America, costing the ­industry tens of billions of dollars, and a majority of companies ­reporting the problem say it is getting worse, not better.

Retailers experiment with ways to protect items in stores. Many stores­ reposition products where employees can keep a watchful eye on them; others limit quantities on display, attach special locking devices such as secure caps or ­resort to putting certain products under lock and key.

Martin says that retailers can do very simple things to reduce the number of items taken out of their stores.

“Eyes and feet on the floor (help), and then if you have a security system…you want to review the videotapes,” he said. “I think those people that are coming in that are organized are probably hitting the stores anywhere from 2 to 4 percent of their profit of their inventory.”

The NRF’s survey said that ORC isn’t just costly but is becoming more and more ­dangerous.

“Of the 129 retail companies surveyed this year, nearly all (94.5 percent) have been the victim of ­organized retail crime in the past 12 months, an ­increase over last year and the most in the survey’s ­history. An increasing number of retailers said thieves are becoming more brazen and that, on ­average more than one in 10 organized retail crime apprehensions (13 percent) lead to some level of ­violence, such as physical assault and/or battery,” the survey stated. “Not only are criminals becoming more violent, members of these crime rings are often engaged in other illegal activities.”

Also according to the survey, retailers estimate that 41 percent of apprehended offenders are involved in “gateway” crimes including drugs, weapons and gang activity.

As the economy forces retail executives to pay close attention to every line item in their budgets, loss prevention executives say senior leadership is more likely to understand how ORC impacts the company’s bottom line. More than half of survey respondents (58.3 percent) believe their top management understands ORC, a 16 percent increase over last year. As a result, many companies are allocating ­additional resources—including more ­personnel and greater investment in ­technology—to combat the problem.

“Typically, 14 to 17 percent of employees steal from their employers,” and that’s especially true during an economic downturn, according to Martin, who is based in Newport Beach, Calif. “The biggest industries affected by this ‘employee entitlement’ mentality are the beverage, manufacturing and transportation industries. But it’s not just the big name companies feeling the effects. Any company where an employee can remove products or money is susceptible.”

“It’s always the bottom line, it’s the ‘R’ word, it’s all about revenue,” he said. “One thing that I would implement immediately is an incentive program to let ­management know if theft is happening.”

The frustration of retailers that are targets for ORC is high, which has made the federal ­government take notice of the issue. Retailers know that organized ­retail crime is not a ­problem they can tackle alone. The FBI and Immigration Customs and Enforcement-Homeland Security Investigations Agency (ICE-HSI) have had an active role in monitoring and apprehending criminal enterprises known for their ORC activities, ­according to the NRF.

In February 2011, ICE-HSI expanded the ORC Pilot Program, which will be known as the SEARCH initiative (Seizing Earnings and Assets from Retail Crime Heists). This initiative began with a pilot program throughout the country that used ­retailers’ own intelligence to track suspected crime rings.

State and local law enforcement cannot always chase ­criminals across state lines and onto the internet—and criminals know it.

In 34 states, the felony theft threshold is $500 or more; 17 of those states have a felony ­threshold of $1,000 or more. Taking advantage of current law, thieves move from store to store, stealing below the felony threshold at each store, thus risking little more than a ­misdemeanor charge and small fine. Even if they are caught, they usually see limited jail time or probation and are soon free to steal again, according to the Coalition Against Retail Crime.

Federal legislation will require online auction sites to collect ­additional data from high volume sellers, which by itself will deter the sale of stolen goods online.

If enacted, this legislation would deter ORC, apply traditional models of stolen property ­requirements to high-volume sellers on the Internet and protect ­unsuspecting consumers; among other benefits.

In an effort for retailers to tackle ORC head on, the first Global Organized Retail Crime Conference will be held March 25-26, 2013, in Las Vegas. 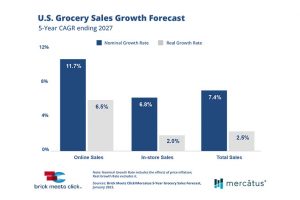