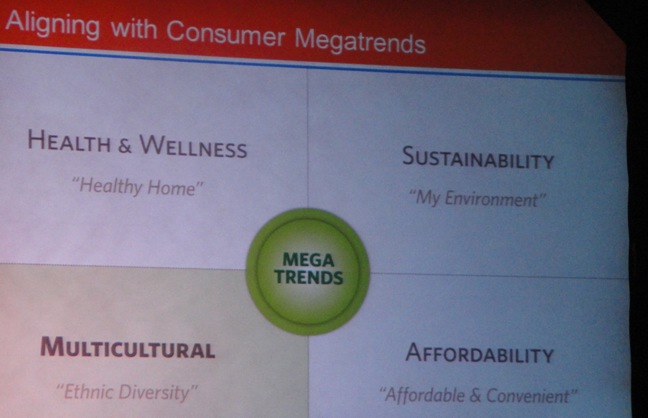 In Latin America, 70 percent of bleach is used for cleaning, while in the U.S., 30 percent is used for cleaning, according to Clorox Chairman and CEO Don Knauss, who detailed the company’s tactics for securing the Hispanic consumer—both in the U.S. and abroad. He discussed the company’s past efforts and future plans for the Hispanic consumer during the Mexican American Grocers Association (MAGA) Conference earlier this month in Palm Springs, Calif.

As Clorox celebrates its 100th year in business, Knauss detailed the results of the company’s market research, which includes four “mega trends” for the Hispanic consumer. Clorox has focused its efforts on health and wellbeing, sustainability, multicultural and affordability.

Knauss notes that, in terms of health and wellbeing, the Latino mom “really (takes) on the responsibility for the wellbeing of the family more than any demographic group, any ethnic group. The Latino mom is very concerned about the overall wellbeing of her family.” Clorox says it engages Latino moms throughout the back-to-school season, the flu season and cough and cold season, placing emphasis on a clean, healthy home.

As part of its marketing strategy, the company divides health and wellbeing into two platforms: stop the spread of infection and family togetherness. Sixty-three percent of Hispanics clean their homes to prevent themselves from getting sick, which Knauss says is a good thing, adding that the tendency to clean routinely to prevent illness isn’t limited to one nationality: “Whether they’re of Mexican origin, Columbian, Chilean, Puerto Rican—they’re ‘germaphobes,’” he said.

For family togetherness, Knauss turned attention away from Clorox’s bleach products and focused on its food products—including Kingsford Charcoal, a company he says was “dying” 10 years ago when Clorox picked it up. He reveals that, while rising popularity for gas grills hurt the charcoal industry, the scale is tipping the other way.

“One of the things driving that,” he said, “is the Hispanic consumer, who much prefers to cook over charcoal than they do over gas.” Also, according to Knauss, 68 percent use their grills year round, putting grocery marketers in a position to drive home meal solutions.

According to Knauss, sustainability has evolved since the recession.

“Prior to the recession,” he said, “it was about saving the planet.” However, since the recession, “it’s about my environment at home,” giving concerned moms as an example: ‘I don’t want my kids exposed to chemicals.’ Overall, the company says there is “a greater emphasis on my home world, not just the world.”

However, in terms of multiculturalism, Clorox may have its “bulls-eye” on the Hispanic consumer, but Knauss reports that the company is aware of other large consumer groups, too.

“If you combine Millennials today with the Boomers, you’ve got half the U.S. population,” he said. “So as marketers, we’re not only focused on this tidal wave of Hispanic consumers.”

As companies have tried to combat value-seeking behavior and rising costs, Clorox looked at packaging.

“We innovated a lot,” Knauss said.

A closer look revealed that Hispanic consumers don’t actually look for small products, but have become more focused on value, he says. So Clorox started selling its club pack sizes at independent retailers.