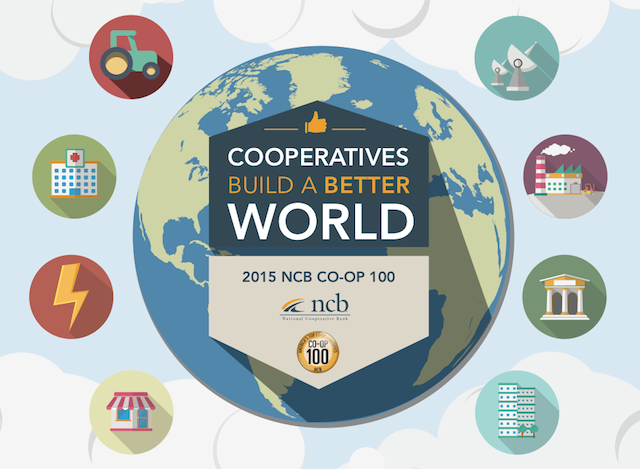 National Cooperative Bank (NCB), which offers banking solutions for co-ops nationwide, has released its annual NCB Co-op 100, listing the nation’s top 100 revenue-earning cooperative businesses. NCB says it is the only annual report of its kind to track the profits and successes of cooperative businesses in the U.S.

Although similar to other business models, a cooperative has several unique features. It is owned and controlled by its members, who have joined together to use the cooperative’s goods, services and facilities. A board of directors, elected by the membership, sets the cooperative’s policies and procedures. By pooling resources, members can leverage their shared power to buy, sell, market or bargain as one group, achieving economies of scale and sharing in any profits generated. In addition, communities benefit both socially and fiscally by the cooperatives’ ability to access and deliver goods and services from across the nation.

The top producer in 2014 again was agriculture company CHS Inc., based in St. Paul, Minnesota, which reported $42.6 billion in revenues in 2014.

The next two spots, also taken by agriculture companies, were flipped this year.

The first grocer to appear on the list, again at number four, is Wakefern Food Corp./ShopRite, based in Keasbey, New Jersey. It reported $11.8 billion in revenue, up from $11.5 billion the year before.

Again at number six, Associated Wholesale Grocers Inc. in Kansas City, Kansas, reported revenue of $8.9 billion, up from $8.3 billion in 2013.

Ace Hardware, based in Oakbrook, Illinois, which has some locations in grocery stores, earned $4.7 billion in revenue and came in at number nine, the same as in 2013, when its revenue was $4.2 billion.

Other companies in the grocery category that appeared in the top 100 in 2014 are, by rank, revenue and revenue change from 2013: