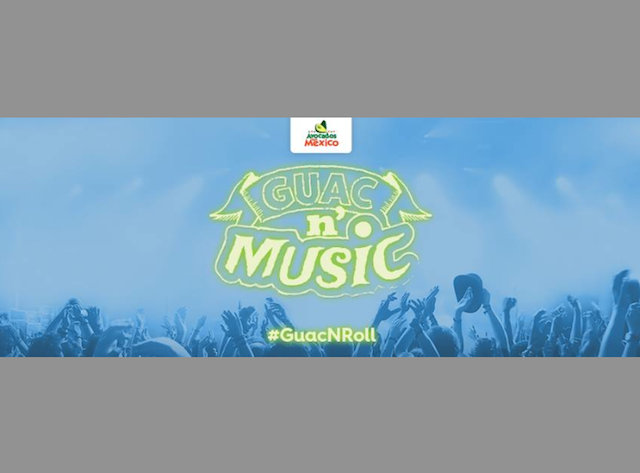 Avocados From Mexico (AFM) made its first-ever South By Southwest (SXSW) appearance at the 2016 festival and, in the process, says it dominated SXSW-related social buzz.

According to data from the social media monitoring company Keyhole, AFM’s #GuacNRoll activities generated more than 32,000 social media posts, making it the most popular hashtag used during SXSW. More than 9,700 fans used #GuacNRoll during this year’s music festival in Austin, Texas, resulting in more than 200 million impressions for the “Always Fresh” brand, and nearly 60 percent of AFM’s 56,000 total tweets carried the hashtag #SXSW, making AFM a contributing factor in driving overall SXSW online conversation, according to the brand.

AFM’s SXSW attendance was focused on showcasing the always-in-season fruit. AFM launched GuacNMusic, a custom AFM radio station, in partnership with Slacker Radio, featuring a compilation of music and artists representing the essence and “Mexicanity” synonymous with the brand. Listeners are able to customize the brand’s AVO-tastic music according to their tastes and, throughout SXSW, users were invited to tweet audio files with their voice to become DJs of the station. Slacker then created individual channels within the station for each DJ, and gave them the opportunity to share those individual segments throughout their social networks.

Avocados From Mexico also adopted several cutting-edge platforms to reach SXSW attendees in meaningful ways. AFM was one of the first brands to leverage Snapchat’s new geofilters, and the brand created different filters each day to engage the SXSW crowd. AFM also implemented 100 strategically placed beacons throughout Austin to reach attendees throughout the week using their iAvocado app.

“Our goal is always to share AVO-love in fresh, unexpected ways,” said Alvaro Luque, president of Dallas-based Avocados From Mexico. “Our brand is all about bringing people together and celebrating the good times, and music is often a big part of that celebration, so it was natural for us to showcase the intersection of great food and music during SXSW.”

AFM says it treated attendees to fresh guacamole throughout the week through other music-inspired activities. The brand sponsored SouthBites, an annual event featuring the best food trucks from Texas and across the U.S. and partnered with 30 musicians to offer unique guacamole options for attendees. The partnerships paid off as guests had the opportunity to engage with emerging musical talent while enjoying various guacamoles, and the musicians were able to introduce their existing fan bases to AFM, according to the brand, which also had its own roving guac-truck in Austin. Additionally, the brand was a fixture at The Container Bar, Austin’s first green establishment made of four-ton metal shipping containers.