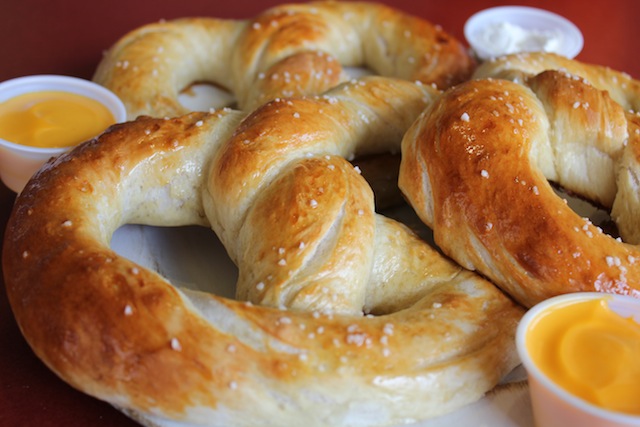 Growing from its first humble location in a farmers market booth to a budding national—and maybe even international—brand, Ben’s Soft Pretzels is taking the next steps in its development by partnering with Meijer and Walmart to open in-store locations.

Founded in Indiana in 2008 by Ben Miller, an Amish baker; Brian Krider, a local businessman; and Scott Jones, a “pretzel fanatic,” the 60-plus-unit franchise is best known for its proprietary, Amish-inspired pretzel recipe. According to the founders, the company’s Amish roots have been key to its growth, and the franchise is growing rapidly. Currently operating 60 stores, Ben’s has opened 27 locations in the past year, with more than 20 in development for 2016.

“Since our early days, we’ve focused on creating a life-changing, pretzel eating experience that’s unlike anything else,” said Krider, who is COO. “The emotion connected to the first bite of a warm, salty Ben’s Soft Pretzel is what led us to become the leader in the soft pretzel market. Every day we’re turning dough into ‘dough’ and honing our efforts in on making excellent pretzels, displaying excellent pretzels, and selling excellent pretzels.”

Charging forward full throttle, Ben’s Soft Pretzels is targeting markets across the U.S., including Cincinnati, Detroit, Louisville, Indianapolis, Chicago and North Florida. With the goal to create high-traffic real estate opportunities for prospective franchisees, executives have signed master lease agreements with Walmart and Meijer. At the time of this report, Ben’s operated in 24 Walmart stores and 12 Meijer stores. In 2016 alone, Ben’s will open in eight more Meijer superstores, and the company is on track to be within every newly constructed location. And Ben’s expansion likely won’t stop there—its real estate agreements are snowballing, according to CEO Scott Jones, who spoke with The Shelby Report.

Ben’s began the process of partnering with Walmart in late 2012, after Miller and Krider both happened to have the idea at the same time.

“They both called Walmart corporate within the same week, which I think kind of got some activity going,” Jones said.

“Somewhere about month 12, we said, ‘wow, this is really taking a long time,’ but we were both interested in the same things, which were protecting the integrity of our brands and both making sure that the other one wasn’t in some way going to harm brand reputation,” Jones said.

This was a learning curve, and once Ben’s began speaking the “same language” as Walmart, talks sped up, Jones said. With their new negotiating skills, Ben’s founders approached Meijer, and the two brands hit it off, entering into an agreement in about six months. The process went more smoothly this time, not only because Ben’s had learned the lingo, but also because the companies have similar backgrounds and values.

“We’re a Midwest, regional brand. And they’re a Midwest regional brand,” Jones said. “Now, they’re a much larger Midwest regional brand than we are, but they’re still family-owned. They’re based out of Grand Rapids, Michigan. We’re family-owned, based out of northern Indiana. Our corporate offices are only two hours apart. They have a very broad reach that happens to just be right in line with some of our territory development areas that we’re either moving into currently or want to move into. So it was a really nice fit with Meijer.”

With negotiations—what Jones calls the hard part—over, Ben’s now is focused on expansion and satisfying customers, something that operating through real estate partners like Walmart and Meijer makes easier. Because the No. 1 priority for retailers is the guest experience, in-store foodservice locations are “all about the customer,” said Jones. “We know that they’re going to do absolutely everything they can to enhance the experience for every guest that walks inside a Meijer or walks inside a Walmart. And if they come to our bakery, inside of our host store, we’re going to make sure that we’re following that same vision.”

Bigger expansion plans on the horizon

Walmart and Meijer aren’t the only ones giving Ben’s a boost when it comes to expansion. The company also has partnered with Gordon Food Service to distribute all the ingredients needed to run its bakeries.

“They have taken us on as a vendor and as a distribution partner to our customers,” Krider told The Shelby Report. “So that gives us an opportunity to distribute all of our proprietary ingredients basically (anywhere) east of the Mississippi, down through Texas and all of Canada and Oklahoma. That was kind of the third key to our expansion growth. We have our real estate partners, we have our distribution network. So now, it’s a matter of filling those open spaces with franchise partners that are excited to sell the world’s greatest soft pretzel.”

With the boost Ben’s has received from Walmart and Meijer and through its partnership with Gordon, the company has its eye on further expansion. Jones said that while Ben’s isn’t currently in talks with other retailers, if he were “king for a day,” he would like to start conversations with some big names in the grocery industry, including Target, Costco and Kroger, among others. The company also is branching out into non-traditional foodservice locations like universities and sports venues.

“There’s not one place we can say we’re not interested in,” added Krider. “As long as there’s foot traffic, Ben’s Soft Pretzels can accommodate and be a fan favorite for anybody walking by.”

That confidence extends to airports. While he couldn’t share many details, Jones said Ben’s is hoping to announce its first U.S. airport location soon, and the company is interested in branching out to other airport locations as well and hopes eventually to open international locations.

Jones also hopes that the company is going to expand so rapidly that it will give Gordon a run for its money.

“I don’t know that we’ll be able to outgrow Gordon Food Service,” he said. “We’re absolutely going to test them, though. But we told them, ‘get ready, guys, you’re going to have to keep up with us.’”

To help it reach that goal, Ben’s has brought on Robert L. Thatcher, a franchise and real estate development professional, to head up that aspect of the business.

“We’re going to put his efforts toward…building the brand and developing new markets, and we have the internal team in place for a good amount of growth,” Jones added.

Despite Ben’s partnership with large grocery chains and its ambitious expansion goals, Jones and Krider don’t worry that the company will lose the local, hometown feel that they believe sets it apart. Because the pretzels are made on-site at every single location, Krider said the company will retain its local feel no matter what.

“It doesn’t matter where you are in the world. We are making things from scratch right there in front of you, including the dipping sauces,” he said.

The company’s business model also is a plus when it comes to catering to locavores, Krider added.

“Our ownership, our business partners, our franchise owners—they’re local people. They’re local owners. I think a lot of people sometimes don’t understand or realize when you go into a Ben’s Soft Pretzels, you’re buying from a local owner.”

Ben’s also highlights its hometown nature through fundraisers and community outreach programs that the co-founders encourage their franchisees to participate in.

One of the founders’ favorite ways to connect with its local communities is to provide vouchers for free pretzels to school principals to hand out to students.

“What we encourage the principals to do is just to give the free pretzels away to kids that do random acts of kindness,” Jones said. “They’re not merit-based on grades or anything of that nature. If you’ve got a kid that’s standing out a little bit for something, just reward him with a free pretzel.”

The company also assists schools and nonprofit organizations with fundraisers. It offers the organizations take-home pretzel kits at cost that they can then resell for a profit.

While Ben’s is willing to help out just about any nonprofit with fundraising, according to Jones, the company is especially passionate about supporting U.S. troops. On April 26, Ben’s raised funds for the Intrepid Fallen Heroes Fund (IFHF) in honor of National Pretzel Day. The IFHF supports families of military personnel who have given their lives in service, as well as wounded military personnel and veterans. Ben’s raises funds for the organization by offering its pretzels to customers in exchange for a donation to IFHF of $1 or more. Last National Pretzel Day, the company raised more than $17,000 from customers, and it donated another $13,000 as a franchise. One hundred percent of the proceeds from Ben’s donations goes straight to those that need the aid. 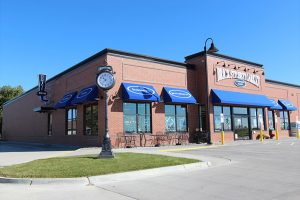