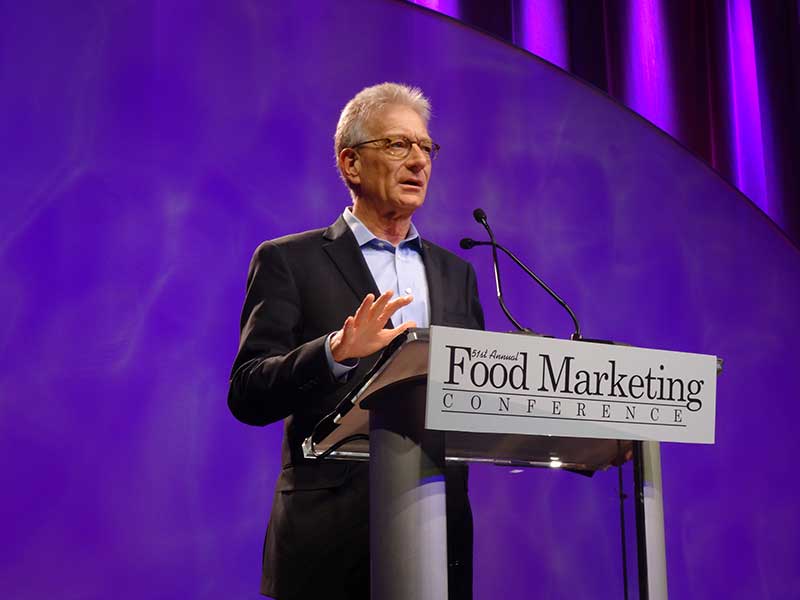 Hank Meijer recently recounted some history and possibly recruited future employees at Western Michigan University during the annual Food Marketing Conference, where he spoke about “Minding Our Customers.”

Retailing starts with a truism that Meijer said is as important today as it was when his grandfather opened a tiny grocery store in 1934 in Greenville.

“Our customers don’t need us. We need them,” he said. “In fact, we often hear that quote sometimes when we wish we wouldn’t from a customer who’s been disappointed with something we’ve done. If we’re out of stock or backed up at the checkouts, they remind us that we need them. They’re so right and it’s still a powerful statement.”

He spoke about living up to that ideal and connecting with the customer no matter who they are or what brought them to a Meijer store.

“I’ve never taken a marketing class, but it seems like in some respects we’ve come to think of ourselves as the true mass merchant in the sense that everyone is a potential customer and that means we compete with just about everybody,” Meijer said.

Menards, Staples and the like, not to mention traditional grocers, mass merchant rivals and restaurants, are all competitors.

“We need to have an opening price point to rival that of Aldi or Walmart so that no one has to say, ‘Gee, I really like to shop at Meijer, but I just can’t afford it,’” he said. “And we strive to have produce in fresh departments that can rival Whole Foods, so that nobody has to say, ‘gee, I wish I could afford Whole Foods, or whatever the name of the nearest upscale grocer, but I have to shop at Meijer.’”

The tension of serving a mass market and at the same time making each customer’s personal shopping experience rewarding is what makes the grocery retailing business exciting today.

“One of the first things we have to recognize in our company is the complexity of our environment,” Meijer said. “There’s a lot going on in a Meijer store. Shame on us if we complicate the experience further.”

‘There but by the grace of God go I’

Meijer’s grandfather, Hendrik, who had been a barber for 20 years, opened that little grocery store in Greenville next to his barbershop. He couldn’t find a tenant for the space after building it with funds on loan from a bank. As the Great Depression was bottoming out, the bank wouldn’t even foreclose on it because it was basically worthless, Meijer said. He had to figure out what to do.

Only chain grocers like Kroger and A&P were expanding then. Hendrik tried to get both of them to take over the location, and neither had any interest. Neither did a local wholesaler, but it did set him up in the grocery business after a local manufacturer gave Hendrik a credit reference, saying he’d probably go broke, but he’d do his best to pay back what he would owe.

“He’d always had an entrepreneurial frame of mind, but he wasn’t planning on starting over at 50,” Meijer said. “In fact, in 1936, when the little store had been open nearly two years, he applied for a job at he post office. He didn’t get it, and boy, am I glad.”

Hendrik Meijer studied Kroger and A&P and introduced self-service and cash-and-carry just as they had. When A&P added a “shiny new meat case,” he added a bigger one, albeit used. He moved his barbershop to the basement and took over that space as well.

“He had something you could call a supermarket,” Meijer said. “And he cared about his customers.”

Welfare was introduced in the 1930s, and struggling merchants like Hendrik were asked to take IOUs from the government that said it would make good on a customer’s order. That bewildered many storekeepers who were financially struggling themselves, and many a customer was embarrassed when the cashier would call for the manager or proprietor to tell them a “welfare order” was ready to check out.

“For my grandfather, it was more a matter of ‘there but by the grace of God go I.’ These were his neighbors and friends, and they would be welcomed and treated just like every other customer,” Meijer said. “And word got around. Low prices and treating people with respect proved to be a powerful combination.”

In 1940, Hendrik Meijer was doing 60 percent of the welfare business in the county. He opened his second store in Cedar Springs in 1942, and Meijer’s father, Frederik, managed that one.

During the economic boom that followed World War II, the family moved to Grand Rapids, where they would be closer to suppliers and more customers. The company is based in Grand Rapids today.

Another leap into the unknown

By the 1960s, the Meijers were operating a dozen stores. Hendrik and Frederik had opened a new supermarket at 28th Street and Kalamazoo Avenue in Grand Rapids and thought that having a new kind of format that had started in the east and was working its way west might draw more customers.

Discount stores were opening in repurposed textile mills, undercutting department and specialty store prices. The Meijers put the invitation out for these retailers to come to Grand Rapids, but struggled to find anyone interested. Shades of 1934 there, Meijer said.

“They took the craziest gamble since that first grocery store and, in 1962, they opened Meijer Thrifty Acres, ‘the self-service, discount department store with a hometown touch,’ they called it,” Meijer said. “That’s a long handle; they were just trying to cover everything. They offered their shoppers one-stop shopping.”

Meijer called 1962 “quite a year in the history of retailing.” The first Target store opened. The first Carrefour store opened in France. Today Carrefour is the second-largest retailer in the world. And Sam Walton opened his first store in Arkansas.

Since then, retailing has grown ever more complex and competitive.

Meijer said for a decade or so, with its own supercenters opening in new places, “Walmart was our great fear and nemesis. When they went to $4 generic drugs a half a dozen years ago, my own quick and utterly unoriginal impulse was to drop our prices to $3.99,” he said. “It’s a good thing we had more creative entrepreneurs on that project. Someone came up with the idea of free antibiotics. Perfect, the magic of free and the recognition that an awful lot of our customers are parents of young children.”

It was one of the “defining moments of our modern era in our business,” Meijer said.

The Meijer name is a good one, but just having it on the door won’t keep customers coming back. Meijer said the company still has a lot to learn.

“We have to rely so much on systems, on data to recognize you as a customer and provide the satisfying individual experience that’s so important. Complexity itself becomes a challenge, so we have to embrace it in ways that spare our customers from having to confront it,” he said. “We have to resist the temptation to do things for our convenience, always remembering that our first priority is to do it for our customer’s convenience.”

Continuing Meijer’s early reputation as a store that welcomed everyone, the company doesn’t choose new store locations based on “affluent zip codes,” Meijer said. A store that Meijer opened in 2013 in Detroit is a case in point. It was one of the most moving moments Meijer said he’s experienced in the last several years.

“We opened that store a week after the city had filed its historic bankruptcy, and not only did these team members hope to be successful in their new jobs, not only did they want their team to open a great store, but there was a sense that a crucial building block of Detroit’s recovery was in their hands. Their families and their city were counting on them, too,” Meijer said. “The overwhelming sense of mission came through.”

Meijer ventured into a new state, Wisconsin, last year as well, when it opened a store in Milwaukee.

This year, Meijer is opening nine new stores in the six states where it now operates—Michigan, Ohio, Indiana, Illinois, Kentucky and Wisconsin. Next year, it will open seven more, including a Sault Ste. Marie store in the Upper Peninsula, an area where, “some of us have longed to be for a long time,” Meijer said. Future stores will open in Escanaba and Marquette.

Beginning in 2018, Meijer said the company will move further east in Ohio to Cleveland and Akron.

Meijer also will go live next year with a seven-story addition at its Lansing Distribution complex that will house some of the most sophisticated logistics in the world. It will have the largest installation of Witron robotics equipment in North America.

“Most of our peers are trying variations of this as, well. We’re all in the experimental stage,” he said. “We’re pleased with the results in several stores so far, but we also know that if it really takes off, we’ll need to reconfigure our approach and maybe even in our stores to accommodate the business.”

His advice to WMU students?

“Start by being prepared for the unexpected. You never know when you might end up in the grocery business after 20 years as a barber, or when you might open a temporary produce stand when a store burns down,” Meijer said. “We have to be agile in our thinking. When a competitor drops a price, we need to be attuned to that and yet recognize that an entirely different approach may be what our customers prefer.”

*Editor’s note: This is part of the Michigan Market Profile, which appears in its entirety in the September print edition of The Shelby Report of the Midwest.