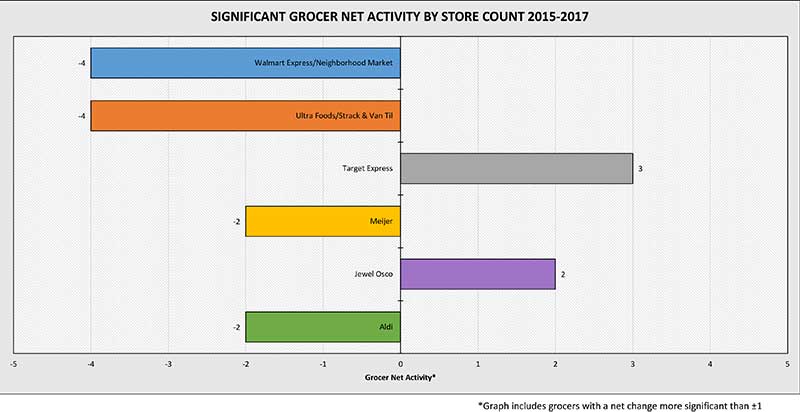 According to Mid-America Real Estate Corp.’s biennial Urban Grocery Study published this month, the Chicago grocery sector showed a net loss of nine stores from 2015-17, totaling a loss of 544,512 s.f. of operating or to-be-opened inventory. The average store size continued its downsizing trend as evidenced by the fact that the average size of closed stores over the past 24 months equals 38,000 s.f., while newly opened or proposed grocers average 25,000 s.f.

“The combination of nearly 1 million s.f. of Dominick’s space being absorbed by the market leaders over the past 24 months, combined with short-term bankruptcies and the ever-present threat of Amazon’s launch into grocery, has created a stall and step backward in urban Chicago,” said Dan Tausk, Mid-America principal and director of urban tenant brokerage and the author of the study along with intern Dan Maentz.

The urban market leaders by store count remain Jewel-Osco with 51 stores and Aldi with 49, though based on activity this is the first time over the study’s history that Jewel has led the count.

The shift to small-format stores
Target is quickly expanding its small-format concept and currently has eight committed locations in the Chicagoland area. Four of those eight locations are newly opened or under construction since 2015, and located in the north and northeast part of the city. The retailer’s activity has been the only significant net positive from 2015-17.

Target’s small format of 20,000-30,000 s.f. clearly is urban in-fill focused, offering a large variety of grab-and-go grocery, pharmacy/health/beauty, limited apparel and electronics. Most have in-store cafes, thus nailing the merchandise mix worthy of inclusion as an urban grocery competitor. The company is focusing on convenience for shoppers and is expected to expand its presence in land-locked urban areas and college-populated towns. In the city of Chicago, the stores currently are located in the higher income, tough-to-penetrate neighborhoods of Lakeview, Lincoln Park, Hyde Park and Streeterville.

Fresh Thyme Farmer’s Market officially has opened the doors of its first two urban locations. Both of the gourmet grocery locations are less than 30,000 s.f. and located in the north/northeast part of the city and near-west suburbs, with the recent opening in the former Dominick’s in River Forest. Future urban expansion appears low priority, however, for the Downers Grove, Illinois-based grocer.

Sub-market losses with more trouble on the horizon
The south/southwest portion of the city and near-west suburbs have incurred a major hit the past two years. The south/southwest city suffered a net loss of four stores equaling a loss of 153,000 s.f. The west suburbs encountered a net loss of three stores, including two small-format Meijer’s and a spacious Ultra Foods. These losses totaled 262,000 s.f., and the absorption of this space could ultimately only include partial, if any, grocery backfill.

Central Grocers’ bankruptcy caused three Ultra Foods and a Strack & Val Til to close in Chicago, totaling a loss of 326,720 s.f. However, Supervalu has since acquired the Joliet warehouse facility for Central, which could stabilize the supply vortex with other local customers.

“The closing of Ultra Foods in Calumet Park instantly created a food desert, by definition. The market may dictate this +/- 70,000 s.f. gets absorbed by only partial grocery, combined with other active non-grocer categories almost guaranteeing a permanent loss of supply here,” said Maentz.

Meijer already has closed two smaller format locations in the Chicagoland area totaling 181,000 s.f., and consumer goods giant Walmart closed all of its Express locations nationally, including two in Chicago, along with two Chicagoland Walmart Neighborhood Market locations, which were primarily grocery, totaling 58,700 s.f. Walmart’s inactivity in urban Chicago remains puzzling, according to the report.

With 25 total store closing across the board from 2015-17, the number of independent grocers also dropped by five while gaining only two new. The net loss of three independent grocers is not a positive sign for improving the food deserts where these grocers penetrate more regularly.

The Amazon effect
As Amazon enters the world of grocery with the purchase of Whole Foods Market, consumers continue to anticipate the opening of Amazon Go stores or perhaps “combo” sites of Amazon/Whole Foods part grocery-part fulfillment center. While the acquisition gives Amazon +/- 450 distribution centers nationally, Whole Foods only accounts for +/- 7 percent of the total urban Chicago market share by square foot. With nine of 13 Whole Foods in primarily higher income urban locations, the repositioning of these sites could offer a prime testing ground for “combos” as these locations match well with the coveted Amazon Prime customer demographic profile.

The battle of discount grocers
Following the closing of three urban locations and a lost development site that failed to get built, Aldi fell below the 50-store-count benchmark in the urban landscape. Don’t count Aldi out, however, as it has two new proposed urban locations locally along with a planned national investment of $3.4 billion to bring 2,500 new storefronts to the U.S. before 2022. The report says to expect an increase of Aldi stores in Chicago over the next few years as the company attempts to defend its prime position against possible incoming rival, German discounter Lidl.

Lidl is in the process of expanding nationally and recently opened its first U.S locations in the Southeast. If profitable, Lidl could expand to the Midwest and Chicago in the near future. Claims from the discounter say it is not worried about Aldi’s large existing network of stores and competing directly for sites in the future since Lidl is aiming at a larger format store of 40,000 s.f., while Aldi stores average 15,000-17,000 s.f.

On the horizon
Two local grocery co-ops plan to open in the city’s urban area. The Dill Pickle with 13,000 s.f. and Chicago Market with 10,000 s.f. are the first co-ops large enough to enter this study. Though these two co-ops are entering the market, the total number of independent grocery stores has decreased from 46 to 43 from 2015-17 due to five closings. Independent grocers total market share declined by 7 percent, a rate much faster than major players’ market share drop of 3 percent. The decline may continue with the rise of Target, Aldi, Mariano’s and perhaps Lidl.

H Mart, a full-service grocer focused on selling goods to Chicago’s Asian community, will enter the urban market. With four successful locations in the suburbs, it plans to open a new 20,000-s.f. site in the West Loop. This is the second Asian-based urban grocer since the arrival of Seafood City in the Mayfair neighborhood on the northwest side in 2016. Seafood City is rumored to now be doubling the size of its store by 2019 due to larger-than-anticipated volumes. 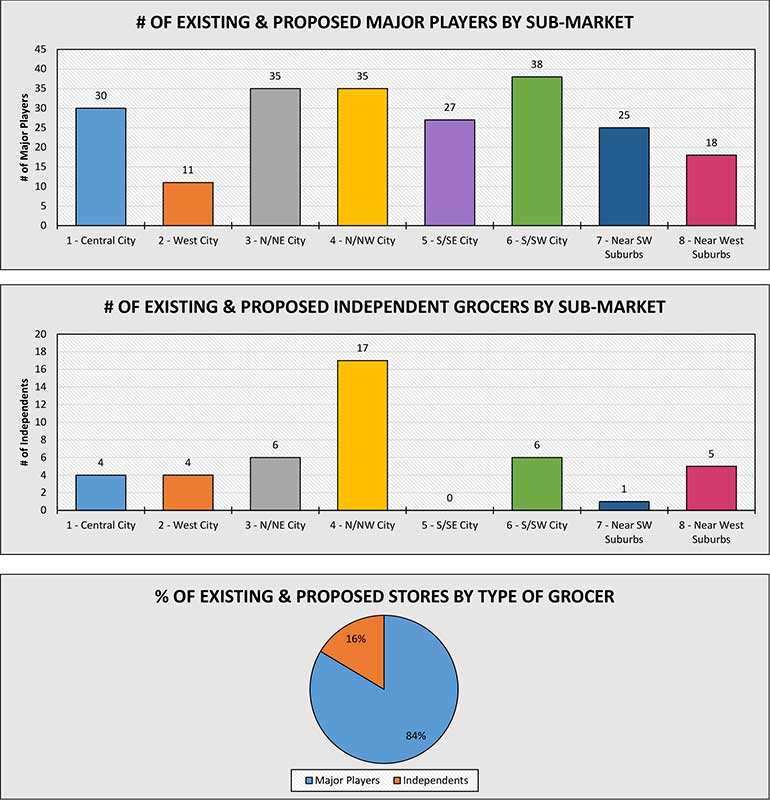 The study includes 3.2 million residents, 1.2 million households and 262 operating or proposed grocery stores that are greater than 10,000 s.f. in size and fall within the aforementioned boundaries.

By category, the study defines three segments of the grocery market: full-service, gourmet and discount and further categorizes grocers as “major players” or “independents.” The current study data covers activity between Sept. 1, 2015, and Aug. 1, 2017. 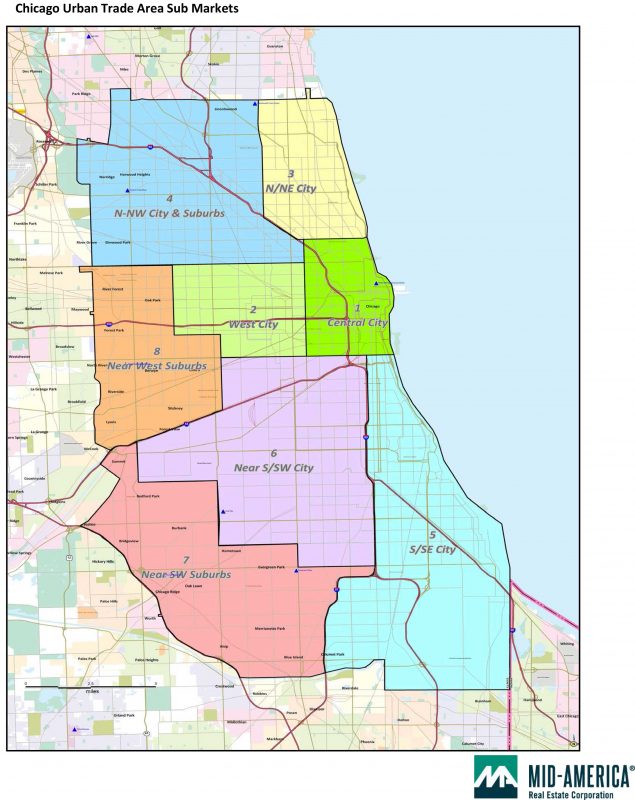 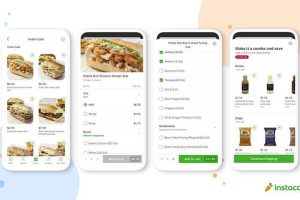 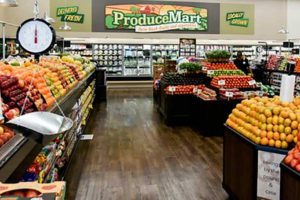 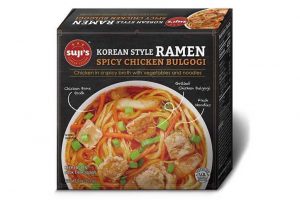