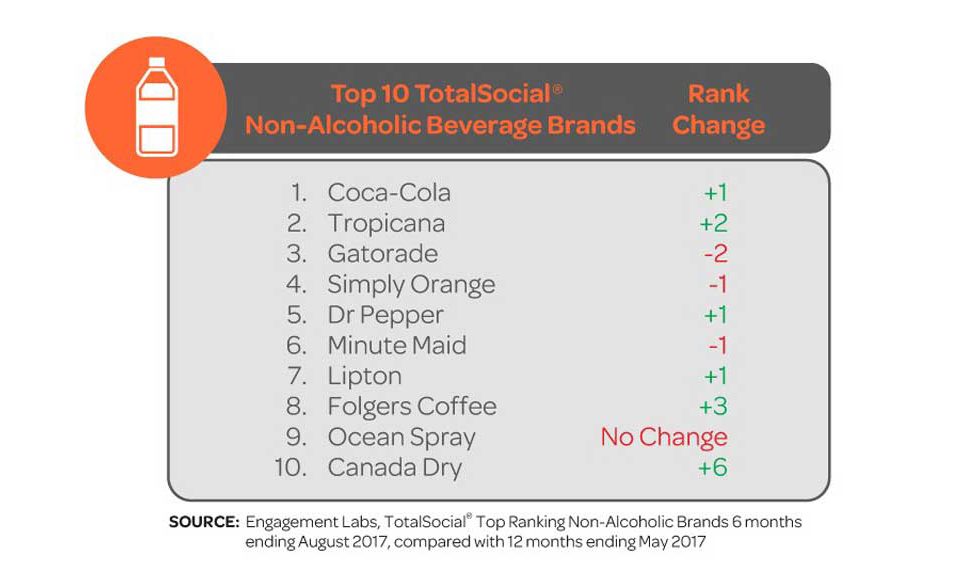 Engagement Labs, a data and technology solutions provider, has released its TotalSocial rankings of the top-performing non-alcoholic beverage brands in the U.S. with respect to consumer conversations. The report is intended to “help brand marketers better understand the consumer conversations taking place about today’s top beverage brands both online and offline,” the company says. It looks at how each brand has performed socially over the past six months and compares those results to Engagement Labs’ May 2017 ranking. The analysis, which combines offline (face-to-face) and online (social media) consumer conversations, is based on Engagement Labs’ proprietary TotalSocial data, which continuously measures the most important drivers of brand performance in terms of social media and word-of-mouth conversations.

According to Engagement Labs’ data, strong offline influence scores helped Coca-Cola jump to the top spot, indicating there is an influential audience advocating on behalf of the brand. Coca-Cola also has been evolving its portfolio of product offerings this year in an effort to better align with consumers’ concerns about sugar and empty calories—which is paying off by sparking conversations with everyday influencers who are taking notice, says Engagement Labs.

“Coca-Cola has climbed up to the number one spot, while its rival, Pepsi, was pushed out of the top ten altogether. Pepsi, which was previously ranked at seven, dropped to 11 due to a decline in its offline and online sentiment scores,” said Ed Keller, Engagement Labs CEO. “For example, even though Pepsi’s controversial ad with Kendall Jenner launched in April, it continued to stir negative consumer conversations months after.”

Gatorade, which previously was ranked at No. 1, dropped to No. 3, driven by its decline in online and offline brand sharing, which measures how much a brand’s marketing is being talked about.

Folgers Coffee made its debut in the top ten, jumping from 11 to eighth in the ranking. Over the last six months, the brand improved its overall online TotalSocial score. In particular, its online influencer score skyrocketed. In March 2017, Folgers promoted its jingle contest in partnership with country music star Chris Young, which asked consumers to record and upload their own videos of them singing a jingle, which were then voted on by participants.

Another brand that made its debut in the top ten ranking is Canada Dry. Canada Dry’s jump in the rankings is due largely to its improved offline influence score. For example, the brand launched an extension to its “Relax Harder” campaign, which encouraged consumers to take time to relax and enjoy life, by introducing “Busy Is a 4-Letter Word,” a campaign which leveraged owned social media, paid digital ads and influencer outreach.

“A lot of the shifts in our beverage ranking are due to improved performance among everyday influencers,” said Keller. “Influencers are not to be underestimated, and most importantly, they should be engaged with. They’re also not necessarily mega-stars—rather they are our friends and neighbors who keep up with what’s new, and are often sought out for their advice and recommendations. Everyday influencers are receptive to brand messages, and when they find it interesting, they share what they learn. This is a significant opportunity for consumer goods brands to take note and learn the lessons from these beverage leaders.”