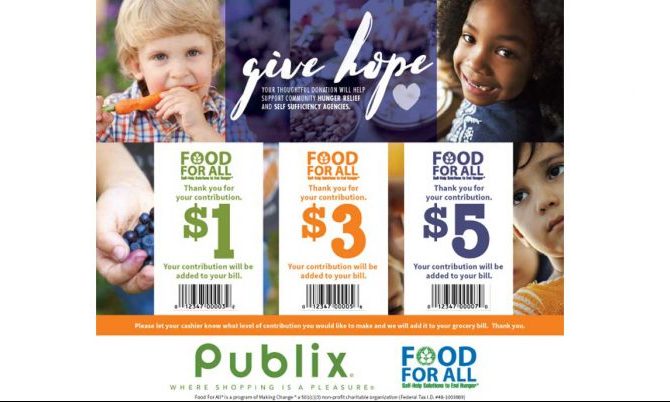 Publix Super Markets Inc. has launched its annual holiday fundraiser, Food For All, which runs Nov. 1 through Nov. 22.

The campaign includes Publix customers and associates who raise money in support of nonprofit organizations serving individuals within their local communities. These local and regional nonprofits help fight hunger and advocate for self-sufficiency.

As a result of the generosity of customers and associates, Publix distributed more than $5 million in grants to more than 185 charities located across the southeastern United States in 2016.

“Each year, we are humbled by the kindness and giving spirit of our customers and associates to help their neighbors that may be facing food insecurity and other challenges,” said Maria Brous, director of media and community relations. “The Food For All campaign provides our customers and associates with a simple way to help, and we’re looking forward to another successful program.”

Themed campaign boards are displayed at checkout, and customers may participate by asking the cashier to add a $1, $3 or $5 contribution to their grocery bill. Food For All is a program of Making Change, a 501(c)(3) charitable organization that has partnered with Publix since 1990.

“We are honored to partner with Publix and help facilitate the Food For All fundraiser each year,” said Dave McConnell, president and CEO of Making Change. “Publix’s determination and commitment to this fundraiser continues to successfully help nonprofit organizations feed communities all across the southeast.”

Net earnings for the third quarter of 2017 were $474.9 million, compared to $421.1 million in 2016, an increase of 12.8 percent. Earnings per share for the third quarter increased to $0.63 for 2017, up from $0.55 per share in 2016. The company estimates the profit on the incremental sales from Hurricane Irma more than offset inventory losses due to power outages and other additional expenses.

“We have faced many hurricanes in our past, but none with the size and impact of Hurricane Irma,” said Publix CEO and President Todd Jones. “I could not be more proud of our associates for their passionate service to our customers before and after the hurricane.”

These amounts are based on unaudited reports that will be filed with the U.S. Securities and Exchange Commission and made available on the company’s website at corporate.publix.com/stock.

Effective Nov. 1, Publix’s stock price increased from $36.05 per share to $36.85 per share. Publix stock is not publicly traded and is made available for sale only to current Publix associates and members of its board of directors.

Shipt To Offer Delivery From Publix In Spartanburg, South Carolina

Publix Ranked One Of The Best Workplaces For Women