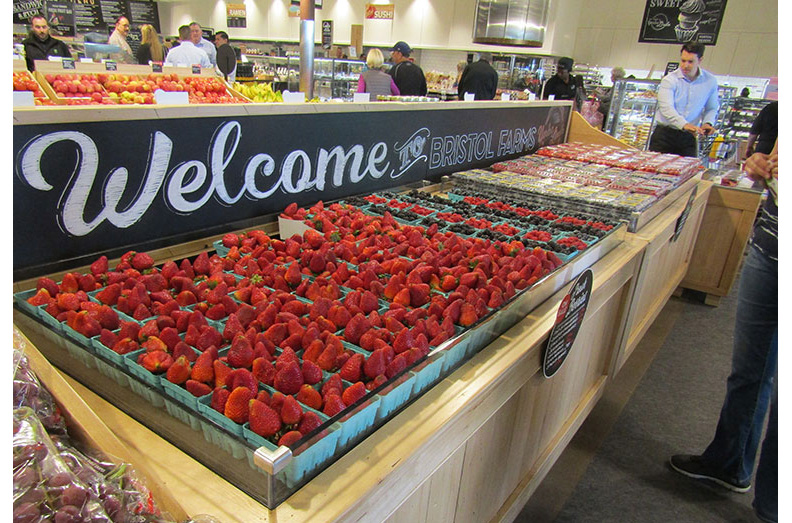 Bristol Farms grocery stores are all about good food, and the new Yorba Linda, California, store is no exception. From the moment customers walk in to the store, located at 18421 Yorba Linda Boulevard, the focus is food—good food.

“We are about good food, so you’ll see a lot of (signs) like ‘Made with Love’ and ‘Eat Good Feel Good.’ You’ll see those elements of ‘good’ because we are saying, ‘hey, what are we? We’re the good food market,’” Caldecott said. “That’s our mantra and we are going to do everything in the community, with our customers and around our food to represent good.”

Caldecott said Bristol Farms tries to hit on the details. “You know it’s to-go food, but we want to play on good so it’s ‘Good to Go,’” he said.

He spoke of the little signature touches, such as white walls and glass jewel cases that all “impress upon the brand.”

Having open berries and open tomatoes in the produce cases are another way to draw people in. 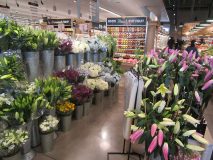 “It’s taking the plastic off the food when it comes to produce because that says fresh farm stand,” Caldecott said. He noted the floral department’s European market style in the bins that hold the fresh cut flowers.

“It’s not the traditional kind of silver bins; they have texture to them,” he said. “Those are all specific details we are after.”

Caldecott said when he proposed the concept for the new store and drew it on a whiteboard, he had three of his major executives with him.

“Two of those major executives looked at me and said, ‘you can’t do that.’ They said, ‘you cannot do that,’ and I said, ‘I don’t care.’ It took all the power to one side of the store,” Caldecott said. “But that’s what the brand is and if you want the brand to be the brand, then you need to represent what it really is.”

Remarking on the large size of the doors, Caldecott said that was intentional, also.

In addition to the visual components, other senses are engaged walking through the store. Walking toward the deli section, customers can smell a variety of aromas.

“You’ll smell the wood smoke and it’s not because we’re piping it in, it’s because we have all of our ovens sitting right there,” Caldecott said. “By the time you get back there your stomach is growling, and that’s the purpose.”

The sound in certain sections of the store also was considered. Walking into the grocery aisles, the music is a bit softer and more relaxing, he said. The lighting along the aisles is strategically designed to provide extra light when a customer pulls a product off the shelf to look at the label.

“All of those things are really intentional details that we’re looking at,” Caldecott said.

Custom made fixtures also lend a unique aspect to the Yorba Linda store, another little element you won’t typically find in a grocery store.

The layout showcases organic, vegan, non-GMO products but also includes regular staple goods. The store also builds interactions between products, such as seasonings used on rotisserie chickens, that customers can purchase and try at home.

“What did I say we are about,” he asked. “Good food. And that’s really what we are trying to present. You can see it in our private label now, just the structure of what we are trying to accomplish. It’s all blending together. It’s very clear and concise and clean … it has a high-end feel to it.”

Caldecott said he knows there are a lot of grocery stores out there but he feels Bristol Farms provides a little extra that keeps customers coming back.

“It’s the last 5 percent that makes you special,” he said. “And that’s all the little details.”

Store designer Kacie Davis, of KM Design Co., said the look of the store “enforces that farm to table feel by paying tribute to the farmers and the artisans behind all of the food here.”

The open ceiling concept helps create the feeling of being at an outdoor, open farmers market, she said. Even the tables were designed to give the farmers market feel.

Davis said the intent of the design was to create a flow of energy from the second a customer walks in until they check out. The perimeter of the store, with all its service departments, gets that energy from the friendly staff, she said.

Keeping food as the focal point also was the intent.

“As a designer you always think that it’s not good enough if it’s minimalistic, but creating a real handcrafted feel to every single sign—like the Express sign or the Taste sign—every sign has so much personality to it,” Davis said.

She said about five different carpenters worked on the store. “I want to feel their personality through the artwork or through the fixture design,” Davis said. “…We’ve put a lot of time and effort into really making every piece feel custom.”

She said even recipe cards are handwritten, sourced through Etsy and coming from all over the world.

The store also was designed to be family friendly.

Having a closed-in patio allows parents to sit down and enjoy their food, knowing their children “aren’t running wild in the store,” she said. The store also provides a free fruit or vegetable daily to children in an effort to help them learn about the items and their health benefits.