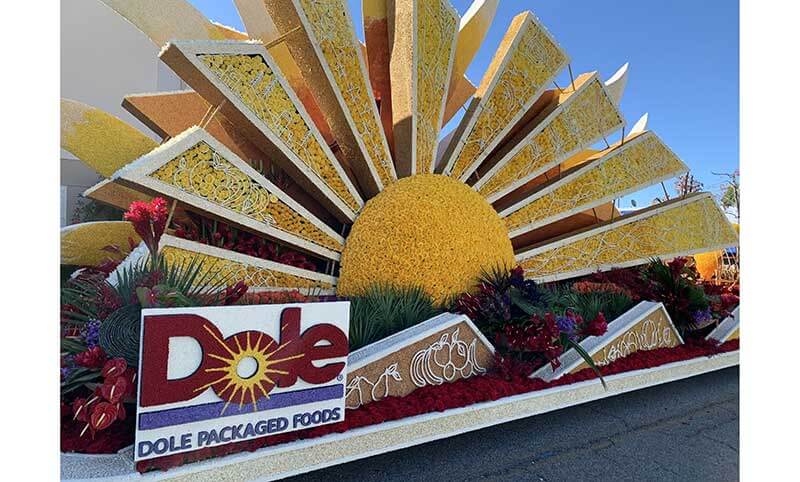 Dole Packaged Foods’ 2020 Rose Parade float, “Sunshine for All,” took home the Queen Award, which is given to the float with the most outstanding presentation of roses.

Dole said the float, which featured a large golden sun with tropical waterfalls, celebrated the company’s belief that everyone has the right to nutritious foods, and its long-standing mission to provide healthy, non-GMO foods to communities around the globe. The sun rays featured Dole’s four pillars of sustainability—water management, carbon footprint, soil conservation and waste reduction.

“It has been an honor to participate in the Rose Parade for the 10th year in a row, and we are proud to receive the Queen award for our ‘Sunshine for All’ float,” said David Spare, VP of marketing for Dole Packaged Foods. “This beautiful float represents Dole’s belief that everyone, no matter who you are, has the right to nutritious foods—and it’s our core mission to deliver accessible nutrition every day.”

Dole, which is based in Westlake Village, California, participates in ongoing hunger relief initiatives, donating millions of pounds of healthy food each year through school drives and fruit for lunch programs, product donations and employee volunteerism.

The Deli Shopper: Based On A True Story
Natural Grocers To Open 14th Oregon Store In Klamath Falls On Jan. 15