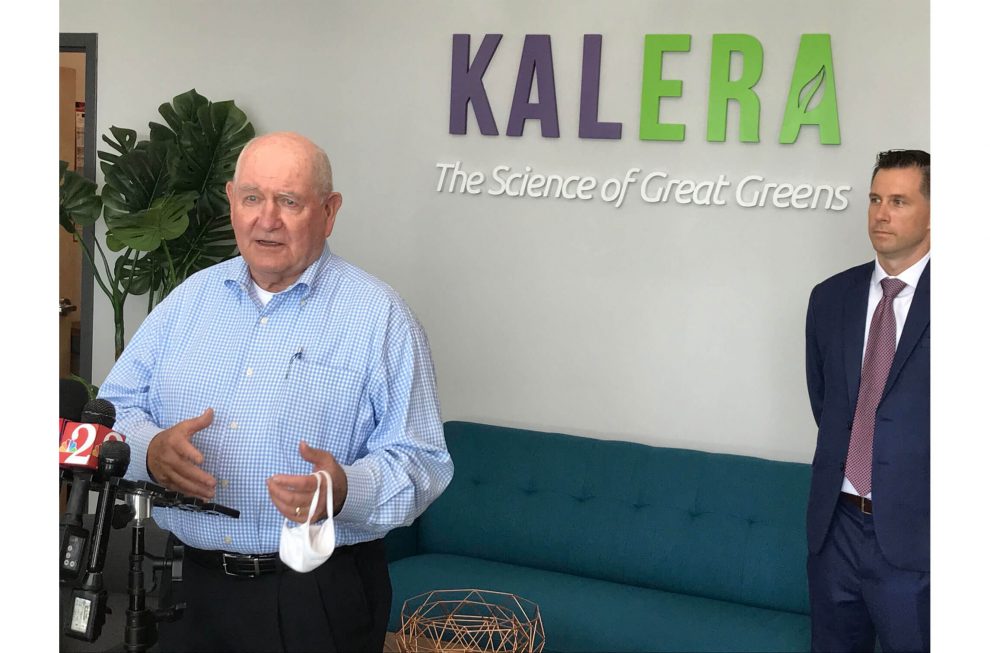 The way Sonny Perdue sees it, Kalera and other hydroponic companies and farmers live out the USDA motto to “do right and feed everyone.”

Perdue, the U.S. secretary of agriculture, shared this assessment after a June 8 visit to Kalera’s recently opened 30,000-square-foot facility in Orlando, Florida.

“Daniel [Malechuk, the CEO] showed me and let me taste the Kalera Krunch. And it’s called that because you can hear crunching as you eat it,” he said.

Perdue, who’s a farmer and also a former two-term governor of Georgia, asked to tour Kalera as part of a broader, day-long trip to Florida. Kalera is a technology-driven vertical farming company that uses hydroponic production systems to grow lettuce faster, cleaner, at a lower cost and with less environmental impact.

After the tour and sampling some of Kalera’s lettuce, Perdue held a media briefing in which The Shelby Report took part.

“It’s good to be here to see really the innovative creativity and entrepreneurship of the United States of America, developing different, better ways to grow and provide food,” he said.

“Producing food for mankind is a noble cause – that really is something that’s necessity. And while I love the fact that Kalera and [Malechuk’s] team consider themselves farmers first, they are leveraging the future of technology in order to produce food in a more efficient way. That’s really what America is all about.”

During his remarks, the conversation quickly shifted to COVID-19 and its effects on the agriculture industry and economy. Perdue noted how vegetables in Florida that were ready to be harvested for foodservice customers had nowhere to go after that industry shut down.

“That’s one of the reasons we’re going to be going to a farmers-to-families food box event in Lakeland later today,” he said. “It’s [a] reasonably designed program to connect farmers’ production through suppliers and distributors to the food banks and other nonprofits that can deliver that food.”

In addition to produce, meat processing took a big hit.

“We had an inordinate amount of COVID infections within those facilities,” he said. “We had a real economic crisis there, where we were in threat of these processing plants being closed and not being able to provide pork and beef and poultry for our meat cases.

Following Perdue’s visit, Shelby Southeast VP Tom Bachmann talked with Malechuk about how Kalera adjusted and accelerated its transition to retail. The company, which had tailored its business to the foodservice industry, had already begun shifting to a 50 percent foodservice/50 percent food retail model.

“We pivoted and were very active in giving back to the [Orlando] community,” he said. “We did giveaway events where I took the team – we filled up a truck with 1,000 cases of product – and we had customers, residents of Orlando, lined up a mile deep at some.”

And, for Malechuk, the events were also a way to connect with the community. He shared the story of a nurse who couldn’t get to grocery stores before they closed at night. “And so, to be able to get fresh, healthy produce – she was in tears.”

Part of Kalera’s shift has helped the company expand its name recognition. That timing has been key as Kalera is gearing up to open a new hydroponic facility in early 2021 in Atlanta, Georgia. It will be similar to its Orlando location but double the size.

“It happens to be in the backyard – literally, a few hundred yards away – from Kroger’s large Southeast distribution center…you want to talk about shortening the supply chain,” Malechuk said.

Even though COVID-19 has disrupted so much of the foodservice and food retail industries, the virus highlighted Kalera as a more localized and accessible product that avoids long transportation costs and worries over how many people have handled the lettuce. Kalera, he said, is simple. “It’s one stop – right through the distributor, right to you.”