After finishing college, Jordan Meister moved back in with his parents in Utah while he worked to pay off his student loans.

“The day after I moved, my mom told me to go get a job,” Meister said. “So I went down to Harmons and got a job washing dishes, and here I am still.”

That was 12 years ago. Today, Meister is the store director for the City Creek Harmons in downtown Salt Lake City, which is one of 19 Harmons’ locations.

And while Meister has grown with the company, so too has Harmons. Opened in 1932 by Jake Harmon, it’s been family-owned from the start. However, in recent years, the pace of growth has picked up.

“Until this year, I think we were at one [new] store a year, probably for the last six years or seven years…we’re kind of cruising up there,” Meister said.

“And in any years that we don’t build stores, there’s extensive remodeling and upgrading in different locations, too. So [we’re] constantly trying to keep ahead of the game in innovating and quality.”

Harmons was on track to open its 20th store this year, but then COVID-19 struck, and they were busier than ever.

“Those will probably be days I don’t soon forget. The first few weeks for sure were pretty wild,” said Meister, who attributed the huge sales to large families and the popularity of “prepping” in Utah. 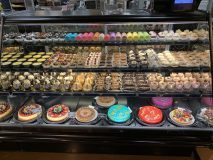 “There were just a lot of people trying to get prepared. I mean, they bought any and everything. Even I bought soup. And I was like, ‘Well, I know I’m going to be here.’ I think that people definitely got carried away with that mentality of, ‘Well, my neighbor is doing it, and I should too.’

“It was all hands-on deck. It felt good in a store. It just was kind of like everyone has to get ready for holidays…we had to do more than a holiday week, basically with no notice.”

During the craziness of it all, Harmons was able to react quickly, pioneering safety protocols in Utah for the grocery industry. Meister said they were the first grocer in the state to: install plastic barriers; put up arrow signs for aisles and station markers for registers; and mandate mask-wearing for associates and then customers.

“We did allow for some health considerations, but instead we decided to just extend the offer to e-shopping and waving the pick-up fee for those people that can’t wear a mask in the store. So we’ll shop for them for free,” he said. “We’re making sure that we keep everyone in here safe, and we have not had a lot of positive tests yet.”

The last several months may have been hectic, but Meister said they also provided perspective, closing the “intellectual gap” of sorts between Harmons and its value in community engagement.

“It was a little more conceptual before. But now being called essential workers and really having to pull long hours and seeing the impact of the community coming in…it provided us an ability to come together and really feel a lot of purpose.”

And while COVID-19 was able to bring home Harmons’ purpose, a lot of the work that the company does goes back to its roots.

“In Utah – in our industry or our market – I think that we stand out with our commitment to service and experience,” Meister said. “It’s a focus every day and – to stretch back to 1932 – the business has changed a little bit…but the whole time since Harmons is open is that we focus on customers first.

“There was a meeting about how to increase sales in bread…in the middle of this meeting, there was someone waiting at the counter. And at some point, they said, ‘Well, what happens if you’re trying to sell this bread and you have to make it, but there’s someone at the counter?’ And Terry [Harmon, former chair of the board] said, ‘Well, let the bread burn.’

“So that’s the language we use when talking about what’s important – not our production, not how we think we’re going to make our money…but take care of the customer no matter what. Let the bread burn.”

As for what’s next for Harmons, Meister said the company still has plans for a 20th location and wants to open a few restaurants in-store. Perhaps another Just Burgers, like the one in City Creek, or a barbecue restaurant.

And for Meister and his future plans – he’s not going anywhere.

“Why I’m still here – that consistency from our leadership in values and standing for what’s right is what I believe keeps people here and keeps people successful in Utah.”