Home » IGA Pleased With Popularity Of Its Label In Marketplace 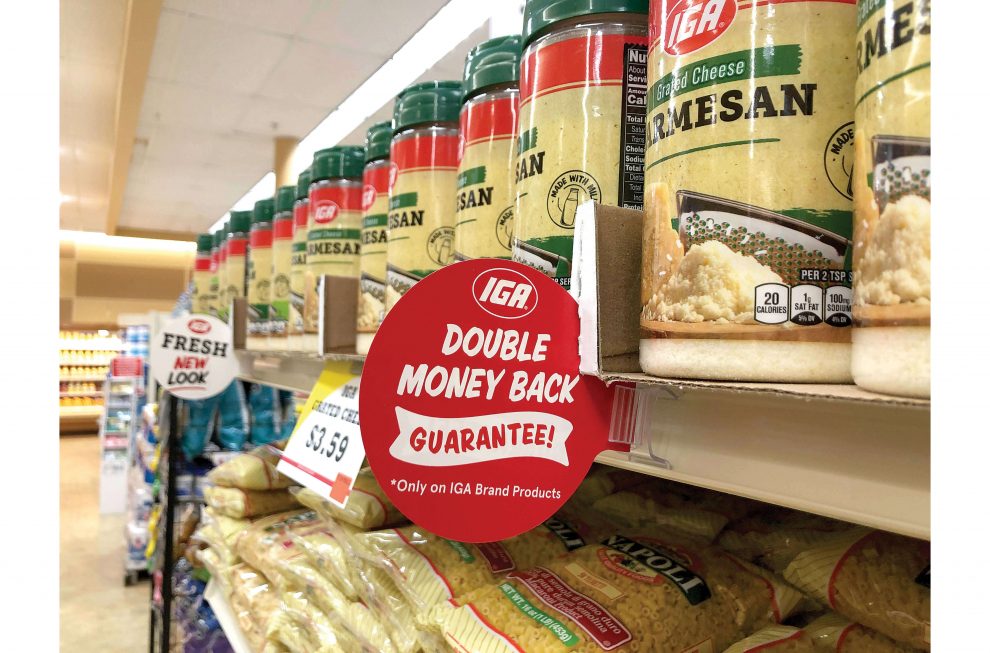 This is the first article in a three-part series by The Shelby Report on private label brands.

The Independent Grocers Alliance recently finished a renaissance of its private label brand, which timed well with the surge in grocery sales during the COVID-19 pandemic.

One of the major players in this reinvigoration and reignition is Robin Groscurth, director of exclusive brands for the organization. From her perspective, the IGA private label line needed a modern spin after 100 years.

“I thought about the ability to create different tiers…we would be customizable and have a modern approach to private label because, as we know, private label is growing by leaps and bounds in the marketplace,” she said. “The best-in-class private label retailers are growing by plus 25 percent.

“And the great thing about private label, from an independent retailer standpoint, is we have the ability to customize our message much faster than national brands. We can react, we can build a brand, we can build organic, we can talk about high-end protein, we can tell them what’s going on – and this gives us the ability to connect with our consumers at a quicker pace.”

“Private label has been growing as a percentage of total grocery sales for a decade really,” said John Ross, president and CEO of IGA.

The pandemic in 2020 did, however, create two phenomena, according to Ross.

“The first one is consumers became afraid,” he said. “And when they became fearful about how they were going to feed their families, they defaulted to conservative and trustworthy voices…and that’s been good for IGA and our private label products because our trust scores are so incredibly strong.

“Then the second is economics. Though we have masked the economic effects of the current recession with artificial stimulus from the federal government, shoppers are fearful of their economic security. And that fear has forced them to make choices about how to feed their family and to do it at the lowest possible cost.

“With shoppers in economic distress, they are looking for ways to be more efficient, how to make more meals out of the dollars that they have. That is leading them straight to private label brands…we don’t see that necessarily changing at least for the next 12 months.”

The fortuitous timing of the brand’s facelift has IGA taking advantage of more opportunities to serve up what consumers are seeking.

Shoppers can walk into a store and see endcaps devoted to “that night’s meal,” load up their carts quickly and return home. They also can find scannable recipe cards for inspiration.

“We wanted to have the consumer re-engaged in cooking at home because we know that everyone’s been at home way too long, and they’re getting bored with cooking,” Ross said. “We wanted to build this relationship of making eating at home fun again.”

Part of pulling this off has been earned trust, particularly with retailers asking for more private label.

“Compare IGA’s brands to other brands in the marketplace. Our trust scores are at or greater than some of the biggest CPG brands in the world, certainly bigger than other private labels,” Ross said.

“The retailers want the program to grow and grow, and I’ve heard nothing but positive praise and excitement. The great thing is we’ve got a venerable brand. The problem is keeping it fresh and new. And I think Robin and the whole team have done a spectacular job.”

This trust can be attributed to the way IGA manages its private label line, and that’s marketing.

“We are marketing the product in-store in a way that would be similar to some of the leading brands in the world…and that is unusual for many private labels,” Ross said.

“When you go into a lot of stores, the private label sits on the shelf as the low-price alternative. They don’t put the marketing dollars behind it – they just let the shopper sort of step down into the product if they need a lower price point.”

“We are a value price brand, but we’re putting the marketing behind it that you would see for a top-price brand – as a way not only to draw the shoppers attention to it, but to reveal the product to shoppers that may have ignored it or not tried it in the past.”

In addition to in-store marketing, IGA is putting the money behind external marketing. That is something big CPG companies will do to get attention directly from the marketplace, not just from retail promotion.

The organization has launched a full campaign that includes digital advertising, promotions, know-how information, recipe information and – for the first time – influencer marketing.

“I’ve never seen another grocery private label program bring in influencer marketing. And it’s been very fun…we gave them product and let them go,” Ross said. “And they did everything from baked goods to crazy baked spaghetti meals that probably are more delicious than anything that’s going to be on my table.

“And the product, with 1,200 stores in the U.S., is going to be close to shoppers everywhere, and it’s inexpensive. A family that followed that meal in the current economic environment could go make the meal, and they might get three meals out of the cost of what it would cost before to make two.”

Feeding into the trusted brand, Ross said IGA has made efforts to show shoppers they’re supported during COVID.

As Ross put it, “The challenge is, do we come out of this with a shopper feeling like they were forced? Or do they come out empowered, learning how to do things that they couldn’t do before?

“If we do a great job of having an incredibly high quality product in the box or can, and then we wrap that with marketing to teach shoppers how to do things less expensively – that are easy and the family will love – they will come out of it feeling like we’ve supported them in a time of need, versus feeling like they were forced into something they didn’t want to do.

“And that’s a real opportunity to earn the share that we have received. Earning that share, we think, is critical.”

As for next steps in IGA’s private label journey, Groscurth aims to teach independent retailers how to customize their brand approach and compete with flair.

“[We want] to show how clean and beautiful the IGA brand can look next to the most competitive national brand equivalents on the shelf,” she said.

“No longer is private label this generic black brand on the shelf. Private label can command as much power and creativity as any national brand…you can be all you want to be.”