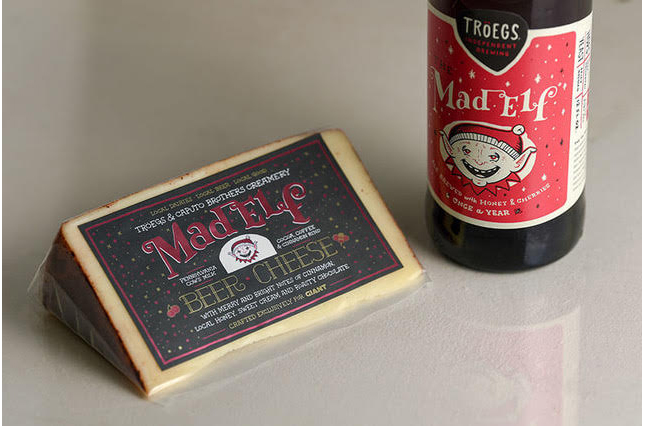 “Every time somebody buys this cheese, there’s a trickle down,” said Caputo Brothers President Rynn Caputo. “This collaboration is literally saving dairy farms. It has also allowed us to hire more cheesemakers – chefs who are out of work and students who need jobs, in addition to partnering with other local businesses. It’s just amazing!”

This ongoing beer cheese collaboration has also created a demand for milk. In the past two years alone, 500 small Pennsylvania dairy farms have closed for good. Lifelong York County farmers Lori and Dan Baumgardner were planning to call it quits after three decades of milking their herd of cows every day and farming 200 acres of crops.

“Dan and I were at the point that we were going to sell our cattle and retire,” said Lori Baumgardner of Barrens View Farm. “Then Caputo Brothers came along and it’s partnerships like this that create a demand for more milk.”

Mad Elf Beer Cheese starts with 100 percent Pennsylvania cow’s milk. At Caputo Brothers’ York County creamery, cheesemakers bathe the curds in Mad Elf, a holiday beer which has been likened to a “toy craze on tap.” Brewed once a year with cherries, dark malts and 25,000 pounds of Pennsylvania honey, Mad Elf offers subtly sweet notes of cherry and chocolate. After the curds are pressed and aged, the semi-soft wheels get a spice rub of cinnamon, nutmeg and clove, created just to complement this cheese, from Calicutts Spice Co. in Hershey. Hershey’s Natural Cocoa was added, along with freshly ground espresso from Little Amps Coffee Roasters in Harrisburg. Finally, it was mixed with more Mad Elf, then rubbed onto the rind of the wheels and left to dry for two days in Caputo’s cheese cave. The result is a creamy, savory and sweet cheese with notes of cinnamon, chocolate, coffee and honey.

“This cheese connects so many different Pennsylvania makers,” said John Trogner, brewmaster and founding brother of Tröegs. “Brewers, cheesemakers, coffee roasters, a spice company. And it helps farmers find sustainable ways to survive and thrive. On top of all that, it’s really, really good.”

Mad Elf Beer Cheese is now available exclusively for a limited time while supplies last, at all 185 Giant, Martin’s and Giant Heirloom Market locations. Customers also will be able to purchase through Giant Direct and Martin’s Direct, the company’s online grocery service. In addition, the cheese is available for delivery via caputobrotherscreamery.com or in person at Tröegs.

“The Giant Co. has a long history of supporting local food businesses and our customers have really loved our ongoing collaboration with Caputo Brothers and Tröegs, anticipating what will be the next offering,” said John Ruane, chief merchandising officer for The Giant Co. “From enjoying Mad Elf Beer Cheese at holiday gatherings to adding to your charcuterie for an evening at home, customers are not only supporting local companies like Caputo Brothers and Tröegs, but also Pennsylvania dairy farmers, too.”