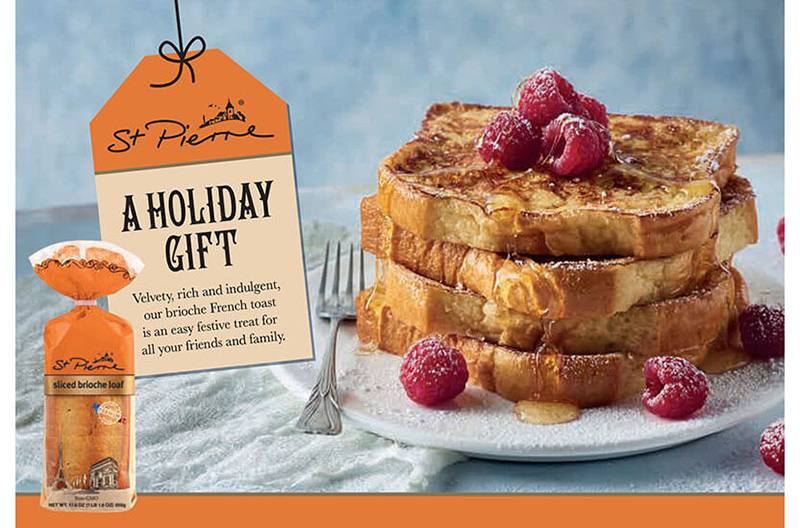 The new integrated approach will be the first of its kind for the brand. Retail activation will center around St Pierre’s signature brioche loaf and how to elevate French toast with brioche. More than 800 stores – including Kroger, Harris Teeter and Safeway – will feature the campaign. A recent consumer panel showed that more than half of participants would choose to purchase St Pierre’s Brioche Loaf over the competition.

“We’re excited to bring this new holiday campaign to life through the help of our retail partners,” said Paul Baker, co-founder of St Pierre Groupe. “We truly believe that good food is more than just a meal on your plate. It’s a get-together, it’s sharing, it’s family – and this is especially true during the holidays. If St Pierre can help elevate that meal and make it even more special, then we’ve accomplished what we’ve set out to do.”

Despite challenges caused by the pandemic, St Pierre increased its investment in retail promotions, social media activity, influencer marketing and advertising to reach more consumers, boosting brand awareness and growth in the U.S. As a result, it saw a spike in retail sales over the past year and has had to double the size of its U.S. team to provide greater support to its retail partners.

Since launching in the U.S. in 2012, St Pierre has reported significant year-over-year growth with sales jumping more than 70 percent in 2019 and another 60 percent in 2020. With a $30 million spike in sales in less than a year, St Pierre is driving growth across the brioche category nationally.