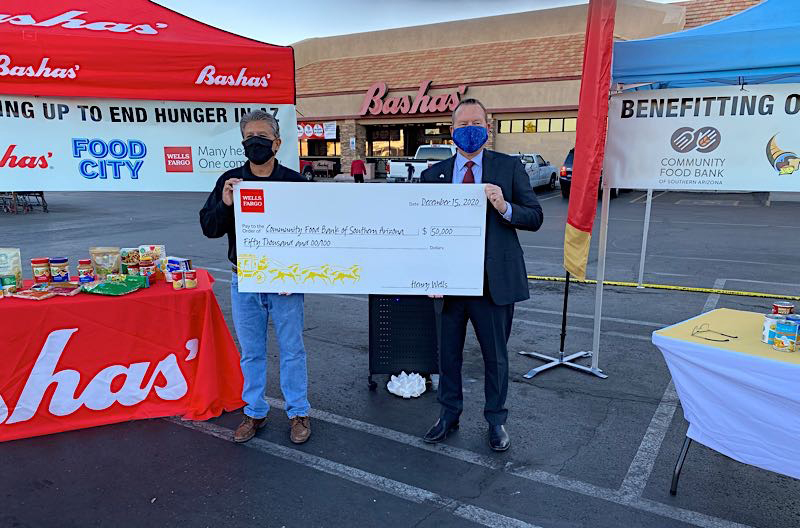 Arizona-based Bashas’ Family of Stores was well on its way last month toward raising enough donations to provide 2 million meals to families in need for the holidays.

In addition to accepting monetary and nonperishable food donations at all Bashas’ and Food City stores through Dec. 31, the retailer matched up to $10,000 in donations made at its registers on Dec. 15. Additionally, financial services provider Wells Fargo boosted the campaign with a $200,000 donation to Feeding America for its network of food banks in Arizona.

“Local food banks need our help now more than ever to keep up with the increased demand for their services,” said Edward “Trey” Basha, president of Bashas’ Family of Stores.

Every December, more than 100 Bashas’ and Food City supermarkets hold a statewide fundraising campaign for Arizona food banks as part of a Charity of the Month program, which invites and encourages grocery shoppers to make a monetary donation at their registers.

In Arizona, local Feeding America food banks are distributing more food to families in need. It is estimated that one out of every six Arizonans – and one out of every four children in the state – suffers from hunger. A few days before Thanksgiving, thousands of people lined up for more than two miles outside one Phoenix-area food bank to pick up boxes filled with ingredients for Thanksgiving meals.

“The holidays are an especially challenging time for so many families, and this year’s pandemic has only exacerbated that,” said Wells Fargo Lead Region President Don Pearson. “At the same time, the resiliency and generosity of the human spirit has become the true ‘heartbeat’ of our community. It inspired us to team up with Bashas’, Feeding America and Arizona food banks to make the holidays a bit brighter this year.”

Bashas’ Family of Stores is a family-owned grocer that operates Food City, AJ’s Fine Foods, Eddie’s Country Store and both Bashas’ and Bashas’ Diné supermarkets. Since the company’s inception in 1932, Bashas’ has given back more than $100 million to the communities it serves. For more information, visit bashas.com.