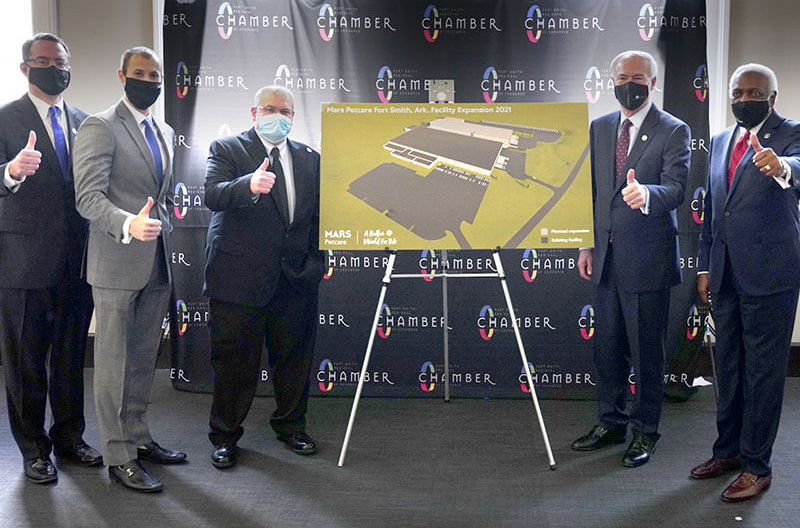 In response to growing demand, Mars Petcare will invest $145 million to expand its manufacturing facility located in Fort Smith, Arkansas. Pet parents have spent more quality time than ever with their dogs and cats during the pandemic – including more than 11 million households in the U.S. that welcomed a new pet this past year. The increased time spent together has led to shifts in pet parent behaviors, as noted in the Mars Petcare, Pets in a Pandemic: Better Cities For Pets 2020 Report. Many pet parents have tried new types and varieties of food for their dogs and cats which has contributed to growth in the wet food category.

“At Mars Petcare, everything we do is in service of our purpose: A Better World For Pets,” said Ikdeep Singh, regional president of Mars Petcare North America. “The investment in our Fort Smith manufacturing facility enables us to continue to serve the ever-growing needs of pets and pet parents and represents our commitment to our associates and this community.”

The announcement builds on a series of investments that Franklin, Tennessee-based Mars Petcare has made in its Fort Smith facility, totaling more than $420 million to date. This latest investment will create more than 120 new full-time jobs, with further expansion planned for the future, and also represents a continued commitment from Mars Petcare to manufacture its products where they’re sold and invest in the people and communities where the company operates. Mars Petcare associates will play a key role in the success of this expansion.

“The investment from Mars Petcare in their Fort Smith manufacturing facility will boost the economy at both the local and state level,” said Asa Hutchinson, governor of Arkansas. “Since the facility opened in 2009, it has become a hub of diverse and quality jobs, and we thank Mars Petcare for continuing to grow and invest in the Fort Smith community.”

The facility expansion will begin this month and is scheduled for completion in 2022. With the investment, Mars Petcare will add more than 200,000 square feet and two additional production lines, increasing production capacity by more than 40 percent, with room for growth in the future to continue meeting the growing demands of pet parents.

“The good news in Fort Smith just keeps coming,” said Arkansas Commerce Secretary Mike Preston. “Mars Petcare is a growing company with strong customer loyalty. They had several options for this latest expansion, but they knew that Fort Smith has what it takes to help the company continue to prosper. I’m excited to continue our relationship and wish them great success here.”

“When a company expands operations time and time again because of its positive experience with a community, it’s extraordinary,” said Tim Allen, president and CEO of the Fort Smith Regional Chamber of Commerce. “Mars Petcare’s decision to expand its operation in Fort Smith again is wonderful news. In operation since 2009, Mars has shown its commitment to the region and strengthened their place as a true growth partner and world-class company.”

Since opening in September 2009, the Fort Smith facility, which is one of 14 Mars Petcare sites in the U.S., has been a fundamental manufacturing hub for tray format foods, making brands like Sheba, Cesar, Iams and Nutro. As pets play an increasing role in our lives, and pet parents try new feeding styles, Mars Petcare will continue to drive innovations across all of its brands. In early 2021, the industry leader will be announcing new products in the wet food category, including Sheba Bistro cat food, a line of new chef-inspired entrees, and new offerings from the Cesar Brand.