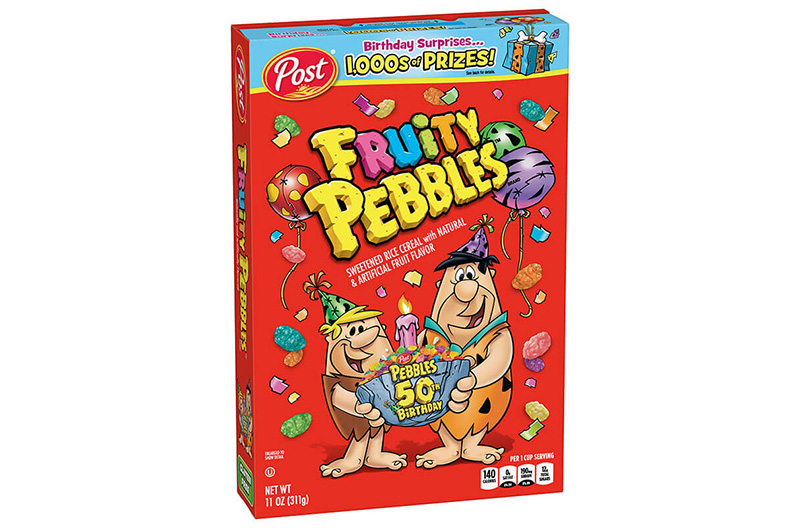 Pebbles cereal, based in Lakeville, Minnesota, is offering a limited-time commemorative box featuring an on-pack promotion giving fans the chance to win presents in honor of the brand’s 50th birthday. To celebrate, fans are invited to join the party in Bedrock and create their own Flintstones-inspired character of themselves in the style of the iconic show from which Pebbles cereal was born.

“Our plan this year for Pebbles’ milestone birthday has been focused on finding ways to surprise and thank fans for their loyalty, and at the same time, keep the fun and party going all year long,” said Amy Brothers, Pebbles brand manager at Post Consumer Brands. “Pebbles cereal has been part of morning rituals, serving as a catalyst for creation for kids and kids-at-heart for 50 years. We’re looking forward to continuing to inspire them to Yabba Dabba Doo! for another 50 years and more.”

Through the promotion, fans can enter for a chance to win a Pebbles prize box that includes colorful confetti poppers, a Fruity Pebbles-scented candle, a branded fanny pack, speaker, tumbler, 200-piece puzzle and new Post Pebbles Crisps snacks. Other prizes include Fred Flintstone and Barney Rubble Pebbles cereal 50th birthday Funko Pop! figures and coupons for a free box of Pebbles cereal or a package of the new Pebbles Crisps.

Using the Pebbles Flintstone character creator, fans can make and style a Stone Age version of themselves to share with family and friends on social media, including customizing their face, hair, body, clothes and background. They also can get a Bedrock-inspired name. Fans can access the character creator and enter the sweepstakes at pebblesbirthday.com.

The new commemorative box and on-pack promotion will be featured across all three cereal varieties – Fruity Pebbles, Cocoa Pebbles and Marshmallow Fruity Pebbles – and are starting to hit store shelves. The entire Flintstone and Rubble families, including Pebbles and Bamm-Bamm, along with the Flintstone’s pet dinosaur Dino and the Great Gazoo, appear on the back of the box. The promotion runs until November.