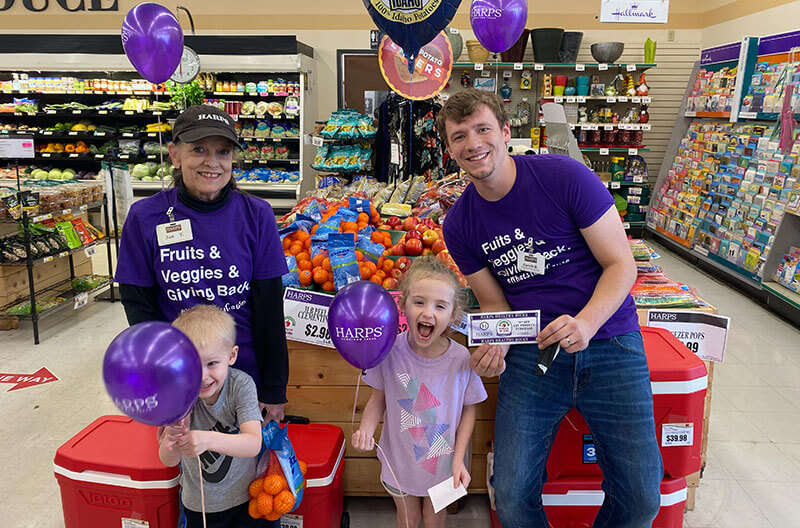 In celebration of its fifth Produce for Kids in-store marketing campaign, Harps Food Stores kicked off “Produce for Kids Fridays” last week, the first of many at Harps through the end of August.

In addition to in-store signage featuring healthy, easy meal inspiration for families, the produce teams will be serving as campaign ambassadors at Harps stores wearing “Fruits & Veggies & Giving Back” T-shirts every Friday, while giving out $1 produce bucks coupons to families so they can try new fruits and vegetables.

The goal of the weekly celebration is to build awareness with shoppers and offer them incentives to make healthier choices by adding more fresh produce to their cart. Since 2017, the Harps Produce for Kids campaign, part of the larger Associated Wholesale Grocers Springfield Division campaign, has raised 880,000 meals for families in need through local Feeding America food banks. 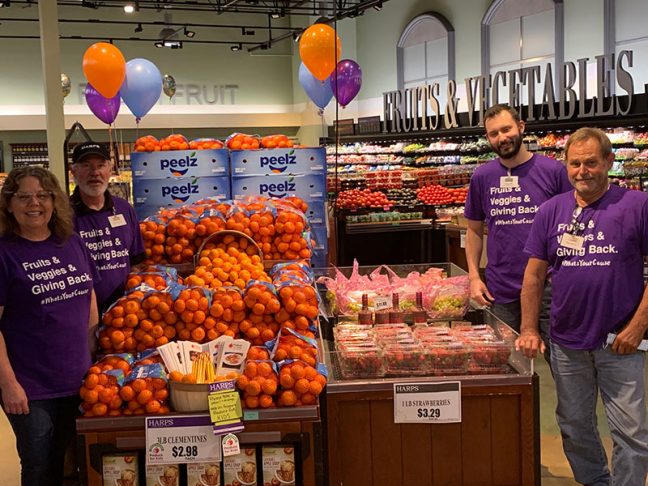 “It was important to me to bring our entire produce team together to make a direct impact with shoppers for this meaningful campaign,” said Mike Roberts, produce director at Harps Food Stores. “The team has something to get excited about and gives them the opportunity to interact with shoppers by encouraging families to add new fruits and vegetables to their baskets.”

Produce partners of the campaign are featured on the back of the produce teams’ T-shirts, and teams are directing shoppers to make note of those produce companies who are giving back to their community. Partners will be highlighted weekly with ad support and recipes featuring their product.

“It is absolutely inspiring to see the Harps team come together in this way and making a direct impact with shoppers,” said Trish James, VP of Healthy Family Project. “Our campaigns are individualized to make sense for each of our retail partners, and it’s been a blast implementing new and innovative ideas in Harps stores.”

Other marketing efforts throughout the year include regular Facebook Live cooking classes broadcast on both the Produce for Kids and Harps Facebook pages and a sustainability-focused website that features ideas for families at home and highlights from partners who are involved in sustainable efforts.

Healthy Family Project will be sharing in-store photos from “Produce for Kids Fridays” at Harps weekly on its LinkedIn page as different produce brands are featured.

Harps Food Stores Inc. is a 100 percent employee-owned company, which operates 114 stores across Arkansas, Oklahoma, Missouri, and Kansas. Headquartered in Springdale, Arkansas, since 1930, Harps continues to grow and employs more than 5,500 associates.