Home » Does Your Meat Case Reflect Diversity Of Multicultural Consumer Base? 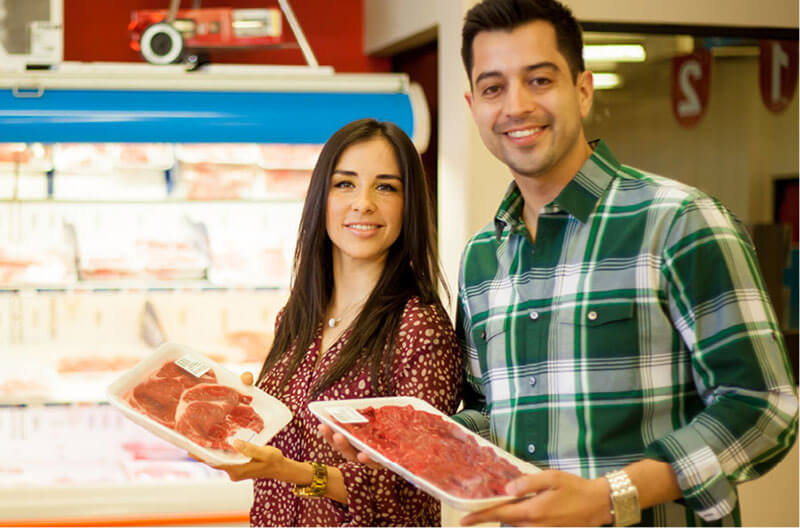 With each new generation, the population of the United States is becoming more racially and ethnically diverse. Estimates from the U.S. Census Bureau show that about 60 percent of Americans today identified as non-Hispanic White in 2019. By 2030, that number is expected to decrease to 56 percent of the population. Meanwhile, the percentages of Americans who identify as Black, Asian and Hispanic are all expected to increase.1

With that will come a more diverse meat shopper with different attitudes and expectations than today’s consumer. In March, Midan Marketing surveyed Black, White, Asian and Hispanic meat consumers to better understand their shopping habits.*

Where are they purchasing fresh meat?

Meat consumers of all ethnicities are shopping at retailers like traditional full-service supermarkets, supercenters and warehouse club stores. While 64 percent of White shoppers opt for traditional supermarkets, these are not the retailers most visited by Black, Asian and Hispanic consumers. Black shoppers are most likely to shop at a supercenter, with 55 percent indicating they’ve visited a supercenter in the last month. They are also more likely than other ethnicities to have visited a deep discount grocery store like ALDI.

Asian shoppers also have a diverse range of retailers they visit. Half of Asian meat consumers visited a warehouse club store in February, while 37 percent visited a health, natural or organic food store and 27 percent visited an ethnic grocery store (which is significantly more often than other groups). Most notably, Hispanics are statistically more likely than other shoppers to have purchased meat online.2

If your store has a growing multicultural consumer base, consider what changes you may need to make to your online platforms. Are all your products available in-app, including those from the ethnic aisles? Can shoppers buy products from the full-service meat counter online as well as in-store? Also look at what you can do in your physical store to meet your shoppers’ expectations. If your customer base skews Asian, consider offering more natural and organic beef options; for Hispanic-dominated communities, perhaps offer more items in bulk sizes.

What are they buying?

Regardless of ethnicity, poultry is the protein most likely to be consumed at most meals. While about half of consumers across races say poultry is the main dish at most of their meals, the percent of Black consumers is even higher at 58 percent. Beef is the secondary protein for all ethnic groups, but Hispanic and White consumers are more likely than other groups to consider it their primary protein.

Asian consumers seem to have the most diverse protein selections, with more than 60 percent of shoppers saying they have pork, seafood and vegetarian options as a main dish at least once per week. Black consumers also over-index on seafood as a main dish, with 55 percent having it as a main dish regularly.2

With different ethnicities often come distinct cultures and cuisines, which affect the specific cuts of meat being purchased. Ground beef and steaks are the beef 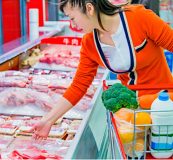 cuts most likely to be purchased among all consumer groups. Asian and Hispanic consumers are the most likely to be purchasing beef shanks at least once per month while Asian, Black and Hispanic consumers are purchasing beef variety cuts (offals) at a significantly higher rate than White shoppers. Hispanic shoppers over-index on several cuts, being the most likely group to purchase skirt steaks, stew meat and pre-seasoned or marinated beef.

In pork, every group’s most purchased cut is chops. Black shoppers over-index for pork hocks and shanks as well as variety meats. More than half of Hispanic consumers purchase pork ribs at least once per month and a similar number are purchasing thin sliced pork. Asian consumers are significantly more likely than other ethnicities to purchase ground pork or pork belly.2

As you consider how to update your meat case to be inclusive of the growing ethnic population, be sure to think about the mix of cuts you currently offer. If your store is in a more diverse area, you probably want to make sure you’re carrying more variety meats and offal, for example.

What else are they considering?

The attitudes and priorities of ethnic groups are likely the areas they differ most. Beginning with claims on their beef and pork, Hispanic shoppers look for pork claims at a higher rate than other consumers, while Asian shoppers over-index on several beef claims. More than 25 percent of Hispanic consumers look for no added hormones claims for their beef and pork and nearly the same number look specifically for GMO-free beef. Hispanic shoppers are also the most likely to purchase imported beef and pork at least once per month.2

Asian meat consumers look for USDA Organic and all-natural beef at a higher rate than other groups. Similar to Hispanics, about 25% of Asian shoppers are also buying beef and pork raised without added hormones each month. Black consumers, on the other hand, purchase claims-based beef less than other consumer groups but do still purchase pork with claims.2 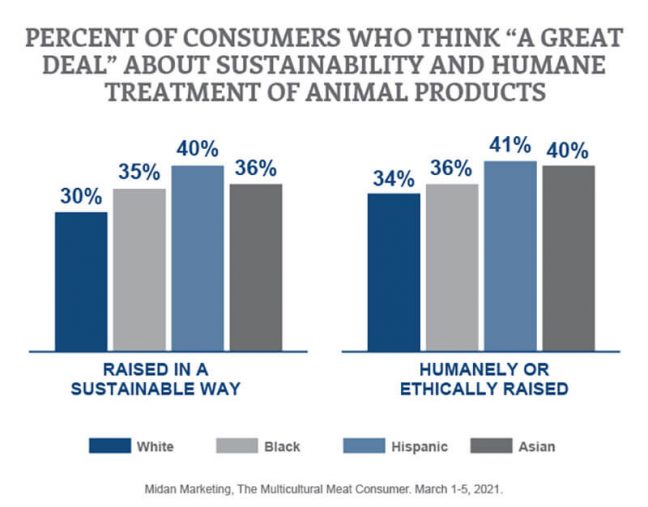 Along with the mix of proteins and cuts offered in your meat case, be sure you are carrying the claims your shoppers are looking for. If your store is in an area with a large Hispanic or Asian population, it will be important to carry plenty of claims-based meats. They’re also more likely to start looking for sustainability-related claims as that remains a hot topic. Also consider in-store signage or online platforms where you can help tell the stories of the producers raising animals for your customers.

Curating a store that reflects your shoppers is integral to being your community’s grocer of choice. Only around 12 percent of shoppers, regardless of ethnicity, purchase meat somewhere other than their primary grocery outlet, making it even more important that your meat case has the variety of products your customers are shopping for.2 In 2030, nearly half of Americans will identify with an ethnicity other than White1 – what do you need to start working on today to best serve the customers of tomorrow?

* We at Midan Marketing understand that many factors other than race and ethnicity play into purchase choices, including geographic region, country of origin and socioeconomic status. The research presented here, however, focuses solely on race and ethnicity.

Midan Marketing fielded an online survey with samples of Black, White, Hispanic and Asian consumers. The survey was taken by consumers 18 to 74 years old who are primarily responsible or who share responsibility for grocery shopping and food preparation. They also must have eaten beef or pork during the past month. 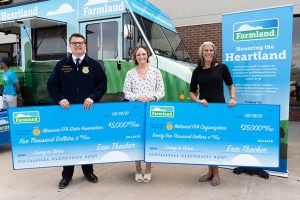