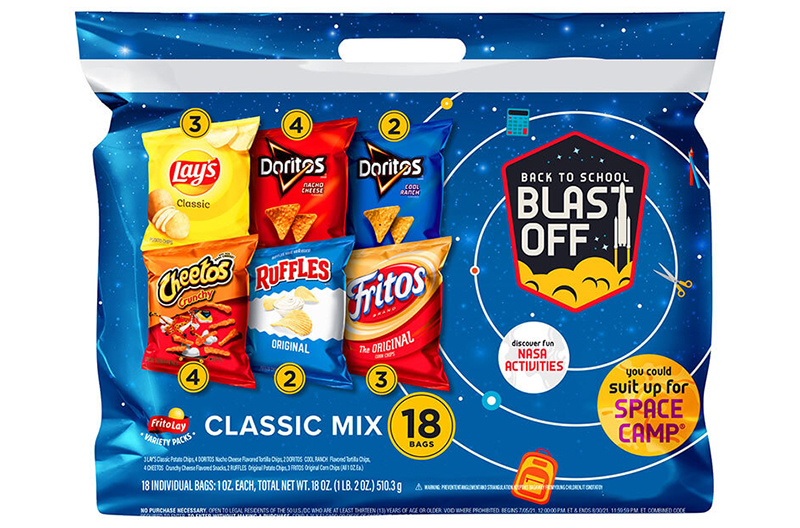 To help shine a spotlight on the importance of introducing and retaining more students in STEM programs at an early age, Frito-Lay Variety Packs is teaming up with Alyssa Carson, an aspiring astronaut and one of a just few certified Aquanauts, for the launch of its Back-to-School Blast Off campaign.

As a part of the program, Frito-Lay Variety Packs will sponsor 50 girls to go to Space Camp over the next five years.

“I developed a love for space at a young age. I was fortunate enough to live out my dream to attend Space Camp, which helped me further cement my interest in the STEM field,” said Carson. “I want to help kids get that hands-on experience at school and in their homes, which is why I’m excited to partner with Frito-Lay Variety Packs on their mission to help young students, especially female and under-represented community groups, develop their passion for space or any STEM opportunity they want to pursue.”

STEM fields are predicted to experience the highest growth in job numbers between now and 2030, yet only 28 percent of the STEM workforce is female, only 7 percent is Black and 6 percent is Hispanic. Through a $150,000 donation, Frito-Lay Variety Packs has established the “Space for Her” Scholarship fund, which will send a total of 50 girls to Space Camp over the next five years. The brand has teamed up with the National Urban League and UnidosUS to select the inaugural class of young women, which includes:

A recent study shows that most girls become interested in STEM around the age of 11, but their interest starts to wane by the age of 15. That’s why, as a part of the Space for Her scholarship, Frito-Lay Variety Packs will include scholarship winners in a “Space for Her-os” mentorship program, which will offer coaching and guidance on different career paths in the science and tech sector. The Space for Her-os mentors include:

“Getting girls excited about STEM is just one piece of the puzzle. We need to address the issue of retaining them in this field by giving more access to programs, mentors and resources,” said Marissa Solis, SVP of marketing for Frito-Lay North America. “Frito-Lay Variety Packs has always been an important part of the back-to-school season, and this year we want to make our impact even more meaningful by offering more ways to keep these bright, young women involved in the world of STEM.”

Families across the country also have an opportunity to win a spot at Space Camp with the purchase of specially marked Frito-Lay Variety Packs. As a part of the Back-to-School Blast-Off campaign, fans can enter for a chance to be one of the ten Grand Prize Winners who will receive a one-week Space Camp experience at the U.S. Space & Rocket Center in Huntsville, Alabama. For official rules, visit FLVPBlastoff.com.